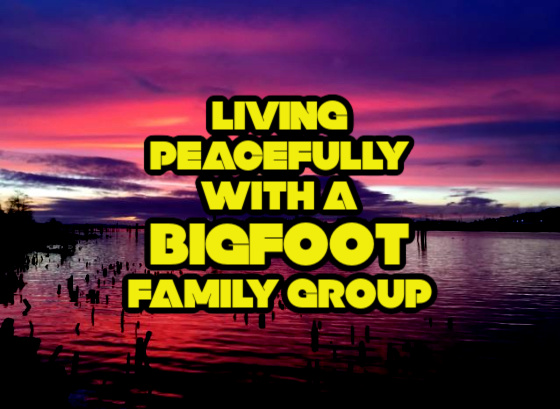 A father and son have learned to live peacefully and to coexist with the local Bigfoot family group in Grays Harbor County, Washington.

The following account was included with another Bigfoot report I received several years ago:

"Thought I'd share what we have learned. I can't use my name as we wish to protect the Bigfoot. My son and I, after having encounters on our property, decided to use a different tactic to close-in our encounters. We didn't want to hunt or track them as everyone else seems to do. We knew where they were spending some of their time so we devised a plan to try and win their trust on their terms.

We played a harmonica, flute or bang blocks of wood to ALWAYS let them know we were coming. The idea here is to never show up unannounced or surprise them. We picked a tree in their favorite area and strung striped 12 gauge copper wire (non toxic) over a weak limb 20 foot high in the tree. I used a lead fishing ball to catapult it over the limb. We took the straight wire and stabbed it through the apples we brought, then bent the wire up so the apples couldn't fall off. We then hoisted the apples up to 12 feet and tied the wire around the tree.

If a bear wanted the apples that were out of reach, he'd have to climb the tree and out on that weak limb. If we returned and found the limb broken and our wire on the valley floor, we'd know it was a bear. But we returned to find the limb and wire intact except that the wire was straight and the apples were gone. We played this scene several times, always letting them know we are coming. They were always watching we suspected.

They soon became accustomed to our peace offering and began to, at first, make sounds that we thought were of the wild. But then they would mimic our very own dog that also accompanied us. They would surround us with the exact same bark as our dog. Our dog, we later found out, was accustomed to them already. Peacefully we would play our instrument and leave.

We learned that they love apples and don't care for oranges, at least this clan didn't. We then took a porous onion bag and filled it with peanut butter, honey, flour and seeds. Strung it up the tree and returned in a few days to find it wrung clean, still hanging from the tree where we left it. Oh, never did we ever return the very next day. The idea here was to allow them time to process the fact that we are not setting them up nor watching them. Because if we were caught doing that, there would be no trust and it would be over before it ever started.

They begin to openly observe us, as we did them. Two young ones, less than 4 ft high, stood within 20 feet of my son watching him as he fed our ducks with no apparent parent nearby. They now move freely, crossing our property to the river each spring and fall while passing through. We always know when they are here because they break tree limbs, yell like a freight train, banging rocks or trees and once sat outside our window and watched our TV making human-like chatter.

Remember I said they love apples? Well, they won't touch a single apple on our trees but will go after our plums and sometimes break off the limbs doing so. Not sure why, but ether they hate spruce trees or they just use them as markers because they are always breaking the tops over, not off, just over. Some are as high as 30 feet and as low as 6 feet. They are also great swimmers and can see in the dark. We have learned much more but it get a little crazy so I'll quit here.' IC

There was a footnote included:

"The valley they're in floods every year from a large creek. Early in our baiting ritual my son and I noticed in the spring that the valley floor was covered with a fresh layer of mud. I was ecstatic as I explained to him that this will help us see some great prints. So we moved from our bait tree to another over the mud layered area. Of course I had to make prints going in to bait the tree. It had to be methodical to leave very few prints. We baited the tree as usual. We returned a few days latter to find the apples gone but no prints? This was a lone tree for at least 50 feet. We couldn't figure out and still don't know how they got the apples" IC

NOTE: I later learned that this location was in Grays Harbor County, Washington. Lon