'Have you seen my brother?' 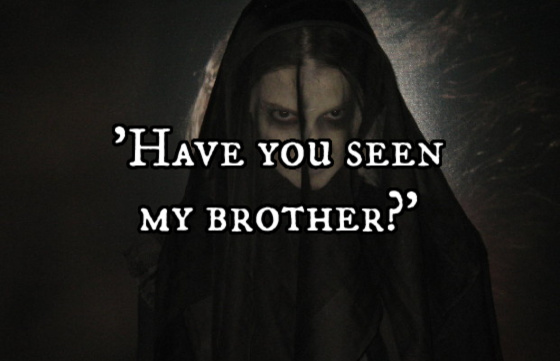 By Kent McCaman - One evening in November of 1991, while enjoying a nice walk on my first visit to London, I nearly bumped into a woman. She stood facing me within armʼs reach. I was shocked that she was suddenly there but pleased that I didnʼt topple her to the ground.

Holding a small purse, she wore a black dress, bonnet, and shoes of the early 1800s. A day earlier, I had seen similar clothes on display in Londonʼs Victoria & Albert Museum. Her face was plump, decidedly English, and exuded sadness. I barely caught a glimpse of her eyes because she slowly lowered her head in despair. And while doing so she asked, “Have you seen my brother?”

I replied, “I donʼt know your brother. So I donʼt know if Iʼve seen him.” Then I looked behind her. Two men, four or five meters away, stood looking at me. I thought they might be escorting and caring for this troubled woman who was out in the dark of London asking strangers about her brother. I stepped aside and said to the men, “Excuse me, I think this woman is lost. Do you know her?” I was uncomfortable. I really didnʼt know what to ask them. I said what I did in an effort to merely be polite and helpful. They said nothing. Apparently they were not with her. Perhaps they didnʼt answer because they didnʼt speak English. And to tend to her, one must speak her language.

Then the woman slowly walked onward behind me. After I took a few steps, I was concerned and I turned around to see her. But she wasnʼt there. This was an open area. No people, no obstacles, could have blocked my view of her. There was nothing for her to hide behind. It wasnʼt foggy. She had just vanished. This puzzled me. I said aloud, but to myself, “Well, I guess this is creepy old London.”

Nine years passed. Once again, I had business to conduct in London. This would be my second visit. I enjoy London. So, beforehand, I went to a bookstore in Los Angeles to buy a useful book about what to see. I like to walk. So I wanted a book easily carried. Most of the books were large and heavy. I removed a thin book from the shelf titled “Walking Haunted London” by Richard Jones. I felt a bit silly about that because I was skeptical about ghosts. But I was curious. So I thumbed through the book. It featured several self-guided walking tours, each tour three to five kilometers long. The author usually began by telling of battles and history pertinent to the area. Then he wrote of specific ghostly events that have been observed by credible people such as Winston Churchill, Tower Guards, and countless others for a few hundred years.

A tour at the bottom of page 23 titled “The Bank of England and The Old Lady in Black” caught my attention. It was a story about brother and sister Philip and Sarah Whitehead.

In 1811, Philip Whitehead worked in the Cashierʼs Office for the Bank of England and was charged and convicted of forgery. The penalty imposed was harsh. A year later he was executed.

Philipʼs sister Sarah didnʼt accept his guilt and was in denial about his demise. Every day, Sarah Whitehead would wear her favorite black crepe dress and walk to the bank to visit her brother. Polite bank employees would comfort Sarah by saying that Philip was not there at the time. They always promised to inform Philip she inquired. This continued for six years. Due to her attire, people eventually referred to her as “The Bank Nun” and Sarahʼs persistence became an embarrassment to the Bankʼs governors. So, in 1818, they made a deal with Sarah. They would give her a sum of money if in return she would agree to never again visit the bank. She dutifully honored this deal and never disappointed them.

But Sarah Whiteheadʼs determination to find her brother was truly unending. Ever since her death, for two hundred years or so, she has been witnessed walking London at night in search of her beloved brother. Author Richard Jones writes that when people see Sarah, she “appears from nowhere and with downcast eyes, inquires sadly but politely: Have you seen my brother?”

Thatʼs exactly what I experienced nine years earlier! The hair on my arms bristled. I finally discovered that I had witnessed a remarkable haunting by Sarah Whitehead.

Of course, I bought the book. I also contacted the author and was delighted to exchange thoughts and details about it. And I got in touch with the Bank of England. They gladly sent me information about this. Researchers of this haunting in books and television have referred to Sarah Whitehead as “The Bank Nun”, “The Woman in Black”, and “The Old Lady in Black”.

I will never forget Sarah. She stood directly in front of me. I believe she was aware of my presence. She wasnʼt five feet away to my side talking to empty space where there was no one to listen.

I wonder if “Have you seen my brother?” is the only sentence she can forever say? And if I had not stepped aside and remained in front of her, could she have walked around me? Might she have walked through me? I regret that I didnʼt have the pleasure of witnessing the actual moment she vanished.

During my second jaunt in London, I wasn’t fortunate to encounter Sarah Whitehead again.

If Sarah and I are ever reacquainted, what will happen when I say, “Sarah, I have bad news. Your dear brother, Philip Whitehead, is dead. Your search is over. It’s time to move on.”