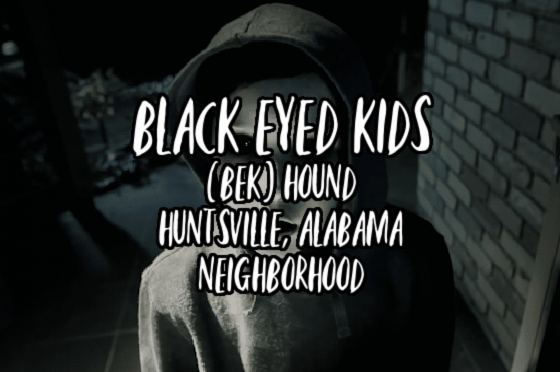 A woman in Huntsville, Alabama was reading about black eyed kids when she heard a knock at her. It was 2:30 am and her dogs were acting strangely. She peeked out the window and saw 2 young boys begging to be left in.

The following account was in my archives. I don't believe that I had previously posted:

"One evening in 2014, I was in my living room reading. It was around 2:30 am and my dog went to the door like he had to go out. I started to get up and he started growling at the door. He has never growled at anything in his life, he was only 6 months old. Then my other dog jumped up on the couch, trembling and whining, she was a year old.

Needless to say, this unnerved me, since I was reading about creepy stuff, including BEK, and was already a little freaked out. So, I just sat back on the couch and held my older dog, trying to calm her down. Then came a knock on the door. Usually, my dogs go wild, barking and whining excitedly because they love people, but my 6 month old puppy ran away from it and came over by me. At this point, my heart was racing and I was just terrified.

All the lights in my house were off and the curtains were drawn. I don't have a peephole so I peeked out through the blinds of the window behind me that overlooked the porch. There were two boys standing there. One looked to be around maybe 5, he was really little, and the other one was about 10, I 'd say. They had their heads down and were wearing winter clothes, heavy jackets. I thought this was weird because it's in the summer. Then, they both turn to look up at me.

I don't have a bulb in my porch light, so I couldn't see their faces but they looked directly at the window. This freaked me out even more, so I moved away from the window and just sat on my couch. I couldn't believe that this was happening. I had heard that if you "knew about them" then "they would visit you" and I just kept trying to convince myself that these were just some young kids playing a prank or something, that this wasn't really happening. However, this felt very real.

Then one of them spoke, it sounded like it may have been the older one. "Ma'am, can you let us in? It's really cold out here and my brother is hungry" I didn't move, didn't reply. I was immediately alarmed because I had no idea how they knew I was a "ma'am." I just sat there on my couch. The voice sounded void of emotion and a lot more calmer and somehow older than the little person talking. What the hell would two young kids be doing out at this time of night anyway? Plus, it's June, in Alabama, it isn't cold by any means.

I felt this overwhelming sense of dread and knew if I opened the door, something awful would happen. I had read the stories and I thought "nope, not gonna answer the door, f*ck this." It was really weird though, because no matter how scared I was, and how none of this made sense. I almost felt compelled to go to the door. Like, I had an urge to help them.

I suppressed it the best I could and ignored them anyway. Then the same voice said "ma'am, please let us in, I saw you through the window, I know you're there. It will only take a moment" I was like okay, WTF "moment"...? What kid says that? I was frozen in fear and just refused to answer them at all. I waited for them to go away, and didn't dare look out my window because I just knew they were right next to it and would be staring back at me with pitch black eyes. Then, after a few seconds of silence, they started pounding on my window and I heard the same voice again.

"LET US IN, PLEASE, IT'S COLD AND WE HAVE TO CALL OUR MOM. SHE WILL BE WORRIED IF WE DON'T CALL HER!"

I honestly couldn't believe what I was hearing, it sounded just like what happened in all the stories I've been reading. At this point I was almost in tears, I was so freaked out. My heart felt like it was gonna bust of my chest. I still stayed silent and didn't answer the door. I just sat back against the arm of my couch and held my legs up to my chest. There was no way I was answering that f*cking door.

I stayed that way for about half an hour, until I was sure they were gone and everything was quiet. My dogs at this point had run into my room and I had to go get them out and hold them because I was just terrified and needed some kind of comfort. I never saw these kids' eyes, I have no idea for sure if they were BEKs, but I definitely believe that they were. I grabbed my phone and called my friend who had suggested I read the stories and woke her up and begged her to come stay the night with me. After I told her what happened, she agreed right away. About 15 minutes later, she still wasn't here. I started to get worried, because she only lives on the next street over. It should have taken her not even 5 minutes to get here. Then at that point, I saw headlights in my driveway and looked out the window. I saw her get out of her car and run to my door, banging on it.

I let her in immediately, and she was crying, had this terrified look on her face, and said "you aren't gonna believe this, but I swear to God I just encountered the two kids you told me about." She said she was at a stop sign, and checked her phone for a second when this kid knocked on her window. It startled her, so she looked up and strangely, the street lights were out so she couldn't see his face, but there was another younger kid behind him. She cracked the window, already apprehensive, and said "can I help you?" And the kid said "give us a ride." In a demanding, overly confident voice for a child.

She didn't say anything and the kid stepped toward her car, and he was close enough now that she noticed he had jet black eyes, wall to wall black, no white. She said she wanted to drive way immediately, but felt like she was being pulled into his stare, almost opening her door before she snapped out of it, but she didn't. She gunned the gas pedal and went straight to my house. We stayed up the rest of the night.

According to the stories, they usually pay you more than one visit, so I'm gonna take a ton of melatonin and knock myself out tonight to try to sleep right through, in case they decide to come again. Believe me or not, this really happened. On Stevens Ave in Five Points. Right here in Huntsville. Lock your doors and windows and ignore any child that comes to your door asking for help. Especially if it's at night." OS