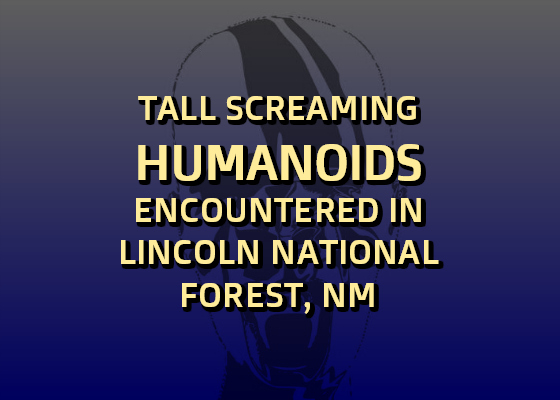 Three teens encounter two unknown humanoids while camping in the mountains. The terrifying screams and heavy footfalls leave the boys paralyzed in fear. What were these monstrous beings?

"I am from Roswell, New Mexico. Born and raised. I grew up dealing with bullsh*t alien nonsense my entire life.

I am a very logical thinker, and have had many strange things happen to me in the past, but have always dealt with them in a “this can logically be explained” mindset since I can remember. But what I am about to write about is something I cannot explain, and it also something I am hesitant to even think about anymore.

I was camping with my cousin Kam (17 at the time, same age as I was), his little brother Nick (13) and my aunt and uncle. We were near Cloudcroft, NM, up in the mountains (Lincoln National Forest). My uncle had just bought a new camper, and we decided to go camping with it for the weekend. The weather was beautiful, and me and my cousins decided to bring a tent to sleep in instead of the camper so we could be in peace. We set up our tent about 60 yards away from the camper and the fire that was right outside of it. Towards the end of the first night, and after a long day of exploring, we all decided to lay down for the night. We were not camping on an actual campsite. It was a spot my uncle had found some years back, and it was the perfect spot to set up camp.

At about 3 am, the fire was completely out. My cousins and I were still awake. Nick, being the youngest, was trying to stay up to be cool with us but ended up falling asleep. It was only Kam and I awake now. We were just shooting the sh*t, talking about hot chicks from school, brilliant ideas for things that need to be invented, and eventually slowly started to fall asleep too.

All of the sudden we heard a BLOOD CURDLING scream from the distance, probably the same distance away the camper was, only in the opposite direction. Me and Kam both picked our heads up off the pillow and said almost simultaneously, “what the fu*K was that?”. It wasn’t a bear. It wasn’t a fox. It was BIG. The closest way I know how to describe it is a mixture between a banshee and a rabid peacock. Its voice was deep, and echoed through the deep woods. It let out another blood curdling shriek and we both sat upright on our blowup mattress. Immediately after the screech, it started clicking. An odd, deep, clicking sound coming from the back of its throat. It was loud enough to hear from the distance too.

We were scared, and neither of us had any idea of what it could be. We waited a second, both quiet as a mouse. It let out another scream followed by a series of clicks but it seemed to be closer now. Maybe 10 yards closer. I looked at Kam and he looked just as shocked as I was feeling. I was trying to convince myself it was a bird of some sort, or a mountain cat, then I heard it walking. It was walking on two feet, and I could distinctly hear it. It even sounded big, taking huge strides, cracking branches and leaves under its feet as it walked. It sounded like it was coming close to us. It screeched/clicked loudly again, I could tell it was about halfway to us now.

Suddenly, another scream/clicks came from another direction, sounding just as close as the other creature. It sounded more aggressive, more angry and dominant. The first creature then let off a series of clicks too. Then it hit me, THEY WERE COMMUNICATING.

At this point, I was terrified, and so was Kam. I had an axe under my blowup mattress, but I was afraid to get up and grab it. Then, both of the creatures started walking towards us. Both on two legs. Not screaming or clicking, but it sounded like they were trying sneak up on our tent. They were getting closer and closer. The first one screamed LOUDLY. I could tell it was roughly 15 yards away now, and so was the other creature. After screaming it started clicking again, and the other one clicked back at it.

They were both walking closer and closer to the tent. I could hear them both stepping on limbs and leaves, but I could feel the ground thud with each step they took. I was panicking, frantically looking for my axe while Kam was frantically trying to wake up his little brother. I couldn’t find my axe anywhere. I realized I had left it near the campfire because we were using it to cut pieces of wood for the fire. Nick was not waking up, and they were getting closer and closer to the tent.

Eventually, Kam and I froze. The second one had stopped about 10 feet away from the tent, but the first one was walking right up to the tent. As soon as it was right outside the tent, I yelled as loud as I could, out of pure fear, “GETHA FU*K AWAY FROM HERE, LEAVE US ALONE!” It stopped. It was right outside. I could almost see it through the tent. It was huge. Tall enough to lean over and look through the top of the tent if it wanted too. I could tell it was slim, humanoid and heavy. I could feel its energy, and it was very negative. I felt the vibes of the universe, and they were telling me that whatever these things were, they were not there to just say 'hi,' or steal our hot dogs.

I was frozen. They were right outside, and the moon was covered by clouds so moonlight was no longer shining anywhere. I couldn’t even hear it breathing. It was silent. The second one clicked from behind us, still 10 feet away or so from the tent. The first was didn’t move. It didn’t make a single sound, and it was probably a foot away from the tent. My heart was beating so hard that I thought I was going to pass out. All of the sudden, it took two huge steps back, and the second one let out a scream so loud it hurt my ears. I immediately burst into tears. The second creature Took off into the woods, pounding the ground underneath it, running on two legs. The first one apparently turned around, and walked away back into the deeps woods. I waited until I completely heard its footsteps disappear until I unzipped the tent. I threw little Nick over my shoulder, and we booked it towards the camper.

We got inside and woke up my aunt and uncle. They had no idea what was going on, and urged us to take our asses to bed. We slept in the camper the next two nights, and I didn’t leave the campsite for the rest of the trip.

I don’t know what we encountered that night, but all I know is that it was NOT an animal. It was NOT human. NOT a bear or a four legged animal. It has scarred me ever since, and its energy and screams still haunt me to this day." YJ

I give you my word, this was very real. I didn’t find any proof to back up our story. However, one thing I did find really strange was the fact that there was a HUGE rock at the end of a “trail” near our campsite that was absolutely covered in moss. The last day we were there, all of the moss on the rock was GONE. I couldn’t even recognize the rock until little Nick said something about it. The rock looked like it had been licked clean. Not literally, but there wasn’t any sign that moss was ever growing on it in the first place. Just a two days prior, the moss on it was so thick that it felt like a couch cushion. YJ

NOTE: It is a very bizarre account. The eyewitness couldn't provide anymore information, not even any speculation as to what these beings were. I read a Skinwalker encounter several years ago that kind of matched the sound that this witness described, but I'm not sure if there is a connection. Lon

Files from the Edge: A Paranormal Investigator's Explorations into High Strangeness