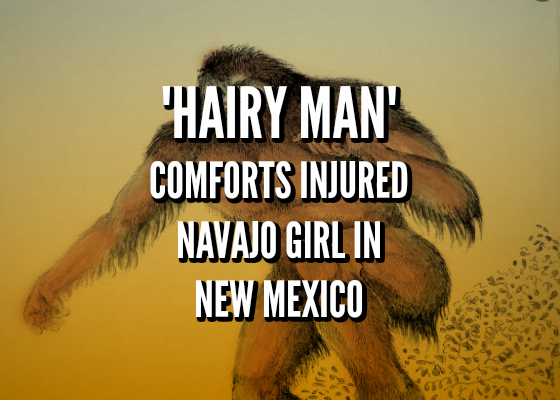 A young injured girl suddenly finds herself face to face with a Bigfoot. This creature shows compassion and care towards her, and assists by carrying the girl home

I recently received a telephone call from a woman 'LM' who described her personal Bigfoot experience:

LM is woman of Navajo heritage who once lived in the town of Lovington, New Mexico. As a child, in this instance the age of 8 years old, LM and her friends would play on the school grounds near her house. There was also a small grocery store with a large porch where the children would also spend a lot of time. Her mother had credit there, so LM was allowed to purchase candy. This grocery store also butchered meat.

During a summer day in the early 1980s, someone or something vandalized the grocery store while the owners were on vacation. The front door had been torn through and there was a large hole in the floor of the front porch. The majority of the butchered meat had been stolen.

When the owners returned home, they started to blame the local residents of theft and vandalism. This was very much out of character for the people in this small town. Everyone depended on the grocery store. Besides, it was a friendly tight-knit community and crime was very rare. There were never any charges brought against anyone. The grocery store soon closed its business in Lovington and moved to another town. The grocery store building was left as is and abandoned.

One early morning a few months later, LM and her younger sister were home alone after her parents had rushed LM's older sister to the hospital several miles away. LM's sister had a ruptured appendix the night before and needed immediate treatment.

LM was sleeping on the couch in the living room while her younger sister was fast asleep on the floor. LM was awoke by a loud creaking sound outside the front door. She raised up from the couch and thought she had seen a large hairy head and shoulders in the window. Alarmed, LM immediately pulled the covers over her head while hoping this 'thing' would go away. She continued to hear noises on the porch. Once again, she noticed the same large hairy head and shoulders standing in the window. It would duck down below the window, then slowly raise up.

By this time, LM had become curious and thought that her cousins may have been playing a prank on her. Her little sister was still asleep on the floor. LM got off the couch, walked to the window and peeked out. She was amazed to see a huge 'hairy man' swiftly striding towards the side of the house in the direction of the school. LM ran to the door, stepped out barefoot and began to run after this large 'hairy man.' She was sure that someone was trying to scare her and she was somewhat fearless when she was young. She was going to find out what this was.

LM ran past the school and made her way to the abandoned grocery store. She heard noises coming from inside the building. She stepped up onto the porch and immediately felt a sharp stabbing pain in her right foot. She quickly sat down on the porch and saw that she had stepped on a large splinter. She was in terrible pain as she tried to remove the splinter while the tears flowed down her cheeks.

Then without warning, a large hairy hand reached from behind her and pointed at her injured foot. LM commented that the fingernails were black and that the hand was the size of a catcher's mitt with thick fingers. She said that she was not afraid of the hairy man, but did not like the way it smelled. She looked up and saw a face of an ape-like man with long dark reddish hair falling over it from the top of its head. The skin was like that of a tanned Caucasian man but more rugged looking. The eyes were round and honey colored. She reached up and pulled on the hair, wanting to see if this was not a costume. She yanked it hard enough that the hairy man grimaced in a way that indicated the he did not like that. But she also noticed compassion as well.

The hairy man then picked LM up into his arms and cradled her like a baby. He rose to his feet and quickly walked in the direction of her house, occasionally stopping near a pine tree in order to see if anyone was watching him. LM was afraid that the hairy man was going to kidnap her, but was relieved when they reach her house. He gently lowered her on the porch and watched as she tried to remove the splinter from her foot.

The hairy man then turned quickly, as if he heard something approaching. He ran off towards a large grove of pine trees and was gone. In a minute or two, the local police car was making its way down the street. LM said you could always tell it was the police because they had one patrol car and that it make a loud squeaking noise as it went by. The hairy man must have heard it from a distance and ran off.

LM now believes that the hairy man was responsible for the break-in at the grocery store. She estimates that the hairy man was about 8 ft in height and covered in thick long reddish hair that seemed to slightly change in hue when it moved. LM said that she never saw the hairy man again, but she did see a smaller hairy biped a few years ago while she was driving home at night. Her account is not widely known, as she never told anyone other than her daughter. She recently encourage LM to come forward. Lon

The Essential Guide to Bigfoot

Monster Diary: On the Road in Search of Strange and Sinister Creatures

Forest Friends of The Night: My True Story of Discovery of the Bigfoot People