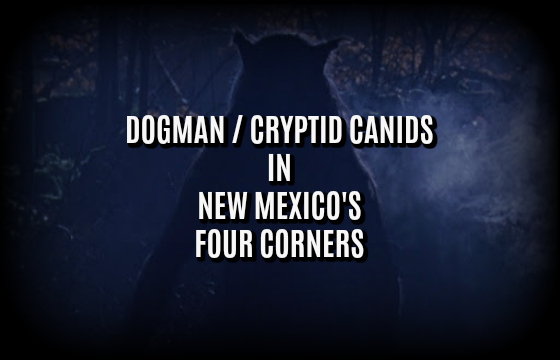 For many years Jc Johnson described several types of canid cryptids that roamed the Four Corners. The following personal account offers a possibility that these creatures may be more than flesh & blood.

In May 2012, Jc Johnson of Crypto Four Corners posted a video titled Wes and the Wolfens. After watching the video I left a message for Jc to contact me. Well, in a few minutes, Jc was calling back. He explained that this video from 2008 had been lost and recently found. He added updated information in the beginning and at the end of the presentation.

I was interested in Wes' sighting of a 'dogman' creature in a residential section of Farmington, NM., as well as the smaller wolf-like animal he encountered while playing in a field in the Four Corners area. Wes' description of the 'dogman' was somewhat similar to those sightings in Michigan and Wisconsin as described by researcher/author Linda Godfrey. At the time, Linda and Jc confided that they believe these particular creatures are natural and terrestrial. I have, for the most part, leaned towards the interdimensional 'side of the fence.' Though I am open for all arguments.

Jc explained that the Four Corners has had a variety of canid sightings (natural and supernatural) other than the typical foxes, dogs, jackals, and coyotes. NOTE: any wolf sighting in the area would be remarkable in itself since the species was hunted out over a century ago.

A Skinwalker is a person (witch) with the supernatural ability to turn into any animal he or she desires, though they first must be wearing a pelt of the animal, to be able to transform. These are commonly described as wolf-like beings though it can be shapeshifted as any past or present indigenous animal. I have previously posted several first-hand accounts at Skinwalker Chronicles

The Weir is similar to a lycanthrope, a supposed mythological or folkloric human with the ability to shapeshift into a wolf-like creature. Whether the change is made on purpose or the result of an affliction is unknown. The difference between the Skinwalker and the Weir, in my opinion, is little more than interpretation. Those people who have witnessed these creatures tend to place a distinction between them.

Dire Wolves are classified as an extinct carnivorous mammal closely related to the smaller extant gray wolf. Some of the modern sighting reports are of huge wolves with varied markings, some as big as an average sized horse. The American Alsatian was bred to resemble the ancient Dire Wolf in many respects, but the sightings tend to be of a much larger canid. Are these natural or supernatural beings?

The Dogman is an enigma, basically because all the evidence has been anecdotal to this point. There have been legends, hoaxes and everything else in between. Most of the information that is available can be found at Linda Godfrey's blog and in her writings. As I stated earlier, I tend to believe these are interdimensional beings. Jc mentioned an interesting tidbit to me. Though the Dogman's strong back legs are like those of a canid there have been reports of a 'spur-like' appendage at the back of the foot that gives this creature a tripod structure in which to stand. 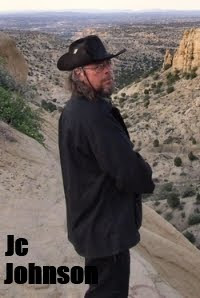 Jc also talked about a particular sighting from a few years ago on the Navajo lands in the Four Corners. The witnesses stated that their sheep and goats had been let out to graze during the day. When the herd started to return early they were concerned that something was amiss. When they conducted an inventory, one sheep and one goat were missing. The witnesses climbed into their vehicle and drove to the grazing area.

When they arrived, the carcasses of the sheep and goat were located, though there was very little left other than spines and skulls. On a distant rise the witnessed could clearly make out the shape of a large canid standing on two legs. There was also a much smaller juvenile canid accompanying the adult. The fact that there were multiple witnesses, it was daylight and that there were defleshed carcasses tends to give the 'natural' argument some leverage.

I first heard the word Wolfen after reading Whitley Strieber's 1978 novel The Wolfen in which a New York City cop investigates a series of brutal deaths that resemble animal attacks. So, what is a Wolfen? In the book, the Wolfen was a superior predator, not a spirit. Though there could have been a supernatural aspect to it. Basically, the Wolfen was a mystery.

NOTE: Research and investigation of upright canines / dogman has become more widespread since the time this article was originally posted. Phantoms & Monsters Fortean Research continues to track these cryptids throughout the state of Pennsylvania and beyond. Lon

The Michigan Dogman: Werewolves and Other Unknown Canines Across the U.S.A. (Unexplained Presents)