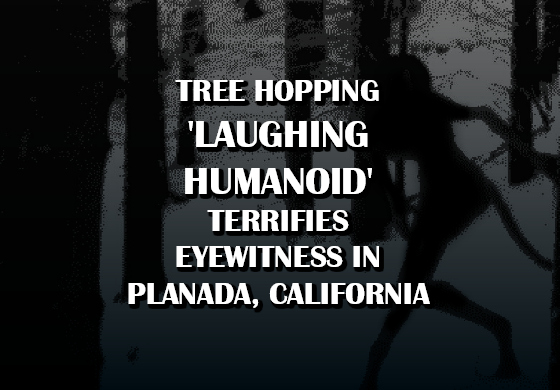 April/May 2006 - Planada, California, USA [1st encounter]: It was very foggy late Sunday night, around 1am, I walked to the end of the driveway to have a last cigarette for the night,

I was standing and facing my neighbor's house directly across street, when I decided to lite my cigarette I turned slightly to my right to cover the lighter.

The second cigarette was being lit I heard the most unbelievable and beyond piercing demonic scream that was so f*cking loud, that I instantly froze like a statute.

I moved only my eyes, very slowly to look from the corner of my eyes at the direction the sound came from while asking myself silently, under my breath, with so much meaning WHAT THE F*CK IS THAT? but I couldn't see what made the scream, I realized whatever this thing was it was hiding behind an AC Unit on the rooftop at the cross the street neighbor's,

In my mind, I told myself, just pretend you didn't hear anything and slowly turn around and walk back in your house. I was so terrified but I did exactly that, I wanted to just run for my life like never before, as fast as I can into my house

Just so everyone gets a better idea how loud the scream was, the house where this happened is on small dead end street, 5 homes on each side, this monster Devil screamed so loud, I was in shock that none of my neighbors came running out to investigate the noise, because I know for a fact every neighbor on that street heard the scream but I understand why no one came out, it's because they were scared also.

What I witnessed for the first time is the most horrific and beyond anyone's worse nightmare. I've since been afraid to step one foot outside after dark and that's never going to change. I've searched and researched over 10 years and still have idea what this creature is or why it was focused on me. I have narrowed down to either Wendigo, SW, or Dogman\Werewolf. If anyone knows what creature makes a most terrifying, piercing, demonic, high pitch, scream, please let me know. It can also jump incredible distances from tree to tree, at least 200 feet apart.

[2nd encounter] Around April or May in 2006: Just after Antonio and his wife had split up, Antonio was doing work on a guy's car. Antonio had sold a Mustang to a friend and agreed to work on it at the his house. Antonio would bike over, work on it, and then bike home. It was late one night, and Antonio claims that he needed a drill bit, so he hopped on his bike and rode home and grabbed the tool. He was riding back to his friend's house along Stamford Avenue when he thought he heard something jumping from telephone pole to telephone pole, some 200 feet away. Eventually it landed on a tree right beside him, which caused the whole tree to bend down and touch the ground. Antonio assumed that it was a large bird. Three or four houses down, while still riding, the “bird” landed in the tree beside him again. Antonio surmised that it landed with such force that, if it were human, it would have broken every bone in its body. Given how far down the other tree was, he could not believe that something could jump that far.

At that point, he looked over and saw something in the tree. He instantly recognized that it wasn't a bird but something apparently humanoid, “a shadow with two arms and two legs.” He kept biking and now four more houses down, the creature leapt from the previous tree into the one right next to him. It was an impossible jump for anything humanoid. Out of the corner of his eye, he could see the creature and he was terrified. He described that it had very long legs which were bent in two places (like a dog); it was black and had a huge torso. He could not see the face of the creature due to some foliage and the fact that it was night. He noted that it seemed to be making a weird sound, almost like a laugh. Terrified, Antonio took both hands off his bike and proceeded to wave them in the air and scream at the creature. He pedalled “like crazy” until he reached his friend's house.

The experience traumatized him and he spent months trying to figure out what he saw, noting that it kind of fit the descriptions of a Wendigo and Dogman but, still, neither really matched what he saw. He also noted that it wasn't a monkey. Curiously, he recalled that just two days prior to his encounter, a neighbor of his had mentioned seeing (and attempting to record) a UFO near their home. Antonio isn't sure if the UFO sighting was related to his experience or if it was a coincidence. In the years since, Antonio believes that the creature he saw, with its ability to jump such huge distances, from tree to tree, and it's enormous size (“it could easily pick up a person and carry them off”) he thinks that it might be responsible for some of the missing persons cases in which dogs cannot track a scent. He thinks that the people were pulled up into the trees and carried off. He also noted that researchers should look into the shocking number of cases in which a missing person is found deceased at the base of a broken tree or in an area with lots of broken trees.

Source: UFO CHRONICLES PODCAST, Ep.34 I Was Stalked By A Terrifying Beast, Published on 13 Jan 2020

NOTE: I need to look into other phenomena and sightings in the area...as well as missing persons reports. Very weird indeed! Lon