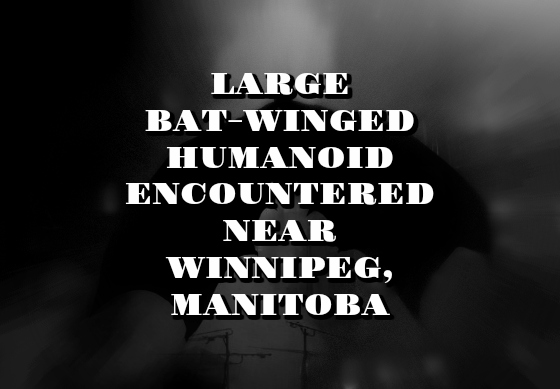 Tobias Wayland at The Singular Fortean Society, who is also a team member of Phantoms & Monsters Fortean Research, was contacted recently by 'Karri,' a woman who said that, in the late summer of 2009, she and her then-partner were travelling from Kenora, Ontario, to Winnipeg, Manitoba, in Canada, when they saw a “large, human, bat-like being” fly across the road in front of them.

According to Karri’s initial sighting report:

"It has taken me many many years to begin to research what I witnessed in the summer of 2009. I am 41 years old and tried to deny it, but I no longer can. I was not alone [during my sighting], I was with my partner of 11 years at the time. He and I are both artists and tattooed out of a Canadian town called Kenora, [but were] born in Winnipeg. We would drive back to Winnipeg weekly to visit family and friends, and [spend] a week in each place.

We were driving from Kenora to Winnipeg in the evening time, [along] a slit double-sided highway [called] Highway Number 1. It’s a very common area for deer so your eyesight as passenger is [used] watching for deer, and that’s when we both saw it. It was a matter of seconds, but we saw a black void in the lights of oncoming cars on the opposite side of the highway; [at first] thinking it was probably a deer, when our headlights [caught] it. I know what I saw and [my partner] saw the very same thing; it was a black-skinned, bald, [unclothed] human, but it was flying lower to ground-height of our Tacoma trucks lights and it shielded its face from the light by flipping its wing up.

I’ve tattooed bat images before, and the webbing skin in a wing with the veining is thin—it was just like that. I could only describe it as a human bat, but [it had] no hair that I saw; [instead it had] more textured skin.

I know I sound crazy, but that is what we saw and it’s haunted me ever since. I tried to look into it straight after, but was too scared. It made [me] question everything. I even went to see a priest...I’ve never spoken about this with strangers before, just close loved ones. I hope this can help in your research and timeline. Thank you kindly, keep safe."

Tobias corresponded with the witness via email to get further details of her sighting:

"It was the very end of our Canadian summer, in the end of July or beginning of August," Karri said. "We were traveling at a decent speed and [the creature] appeared to have a good speed of its own going. I'd like to say, by the time it had hit our side of the highway it was six feet [away from us] and its length would have me say it was over [six feet tall]."

"The time had been between 7-8 pm, as we closed up shop at 6:30 pm and left from work to Winnipeg," she added. "Our sun sets at our closing time that time of year, and I know [the creature was close to our vehicle] because we slammed on the breaks. As far as wingspan, I could not tell you, but [the wings] appeared to be in proportion with its body. Wish I could tell you more details, but it was [over in a] matter of seconds. I just know that we saw black voids in front of other cars’ headlights, and that when it was in front of ours I saw what we both saw. A wing coming forward to shield its face and then it was gone."

Like others who have witnessed similar, seemingly impossible events, this experience left a lasting impression on Karri. However, unlike many other witnesses, she had the benefit of being believed by her parents and the family’s priest.

“It made me feel shock and disbelief at first," she said. "It was honestly the scariest situation I had found myself in. We came into Winnipeg and both of us told our parents, convinced they would think us both to be crazy or on drugs, neither was the case, and both our parents believed us and said there are things in this world one cannot explain. [Our] priest gave us holy water and said ‘We walk in the valley of death’; a saying I’ve heard growing up on occasion but didn’t understand [until then]. I was terrified, the entire situation had me questioning everything I had known, [and] made me think of the world in an entirely different way."

"As pathetic as it sounds we didn’t go anywhere alone [after our sighting], even inside our cabin on the water, if I went pee or made a snack [my partner] came with me," she continued. "We didn’t express what happened to [people other than our parents] at first, due to thinking people would say we’ve gone mad. I pondered if it was evil, if God rejected me. I really didn’t know how to feel or think."

Over time, the profundity of the experience faded into the background.

"Once we moved back home, the feeling eventually eased up; much like a death you mourn for so long and with each day you slowly get back to life, not forgetting, just learning to live again," Karri explained. "It took me at least a year until I would go anywhere alone in the evening time. I’ve never in my life seen anything like this again."

Ultimately, Karri could find no easy answers to explain the encounter, although she has found some comfort in her faith.

"[I've] seen drawings that were similar, which made me feel less alone in it," she said. "I did get baptized years later, my partner never did. We were close friends for over 10 years before we got together and remained together for 11 years. This situation...we both don’t have answers for what we saw, but we know in our souls what we felt and experienced to be true, and as a mature aged adult now, I am still 100% sure as to what I saw in that brief moment and no one could ever tell me otherwise."

Have you had a sighting of a flying humanoid or huge bat-like creature? Please feel free to contact me at lonstrickler@phantomsandmonsters.com - your anonymity is guaranteed. Our investigative group is conducting a serious examination of his phenomenon. We are merely seeking the truth and wish to determine what eyewitnesses have been encountering. Your cooperation is truly appreciated. You can call me directly at 410-241-5974 as well. Thanks...Lon Strickler
Mothman Dynasty: Chicago's Winged Humanoids