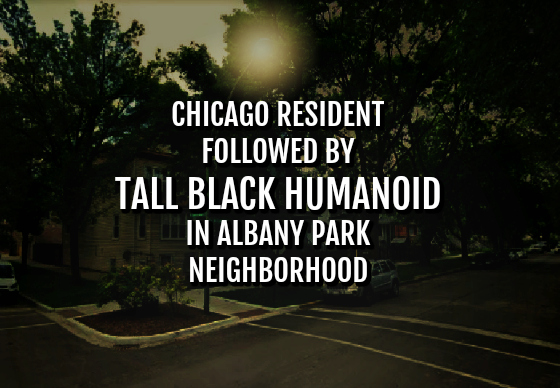 The following account was reported to Tobias Wayland at The Singular Fortean Society. Tobias and his wife Emily are also members of Phantoms & Monsters Fortean Research:

The Singular Fortean Society was contacted recently by a witness who said that she was out walking her roommate’s dog just before midnight on January 9th when she noticed a tall, thin figure shuffling towards her.

The witness, who asked that she be referred to only as Kel in this article, was instantly unnerved by her experience, which she described to investigator Tobias Wayland in a series of email correspondence.

"My roommate got a dog and I was helping by taking him out to go to the bathroom, in the Albany Park neighborhood in Chicago. I was also going to go for a long walk because the dog was restless. As I started to walk down the sidewalk, I looked down the sidewalk ahead of me. Then I saw a very tall, skinny, all-black figure about seven to eight feet tall. It was shuffling towards me very slowly. I stopped and stared, trying to convince myself it was a person, but I could not make out any arms, or it's as if it had long arms being tucked behind itself. I couldn't make out a round head shape either. I instantly got scared. I didn't have a good feeling. I got creeped out and fled back to my apartment, looking over my shoulder it was still there," the initial email read. "I just wanted to tell someone. I am not sure what I just saw but it was unsettling."

Kel reported that she "looked at it for about [a] minute," but "couldn't make out what it was, and got a very unsettling feeling about the tall dark figure shuffling slowly towards [her]."

At that point, she "pulled the dog along and ran in the direction of [her] apartment."

“I glanced over my shoulder [two times] to see if it was still there, and the figure was walking slowly in my direction. Not aggressively coming towards me, but it was facing me, watching me, and I got an eerie feeling that I should get back inside,” said Kel.

Wayland asked Kel to describe the figure in more detail, if possible.

"[It was] definitely a humanoid solid shadow figure," she said. "It wasn't transparent or anything. Just black, skinny and very tall, and it had weight to it as it shuffled. I could not see eyes, or a face, the head was not a round silhouette. I saw two legs, like I could not make out any pants or shoes. No clothes. No arms dangling at the torso sides, but there appeared to be something being tucked away behind them. Just a dark black solid figure."

"I was very confused why I could not see clothes or features besides a mis-sized head and two legs and no arms, or some arms or something tucked behind the figure, just black," she added. "I feel like the figure should have been better illuminated because it was right underneath the street lamp light."

Kel told Wayland that while she had experienced a couple of paranormal events in the past, and was perhaps sometimes privy to psychic intuitions, she'd "never had any experiences with physically seeing UFOs or otherworldly apparitions, not even ghosts.”

"Definitely felt nuts after seeing this one though," she said.

Almost three weeks prior to Kel’s sighting, a Chicago couple reported a “large, thin man appear out of [Schiller Woods]” whose “eyes were huge, [they] almost looked like a praying mantis’ eyes, just jet black.” 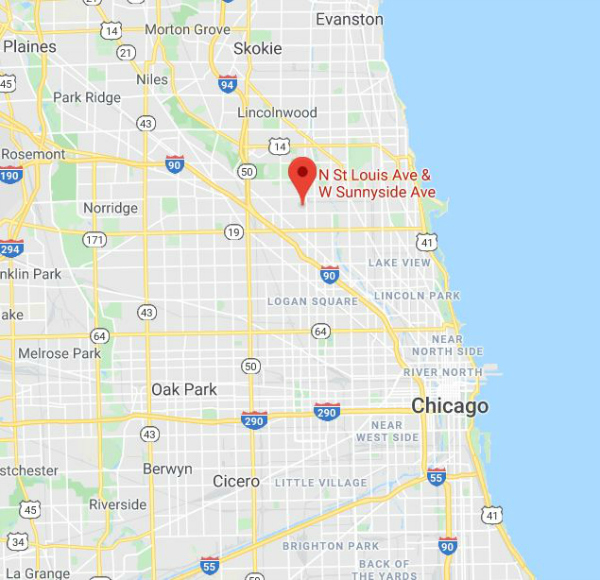 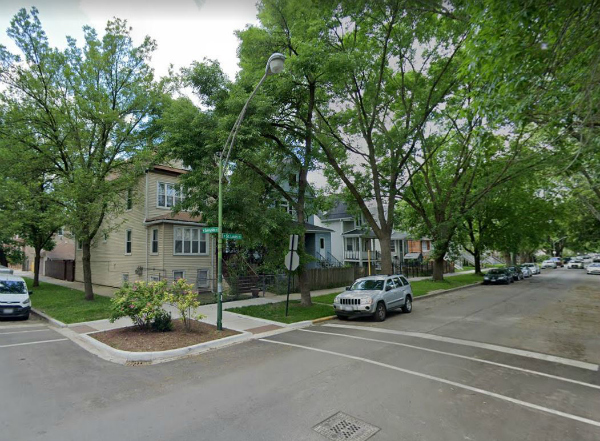