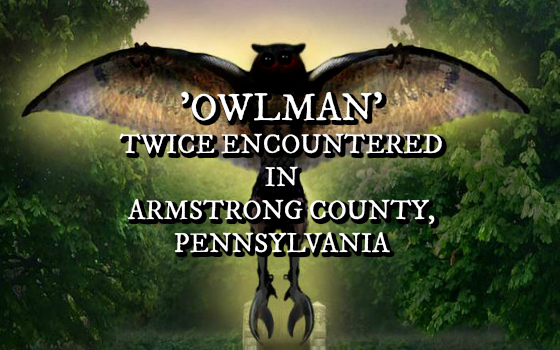 I recently received a telephone call from 'DF' who lives on his farm with his family near Freeport, PA in Armstrong County, PA.

On October 11, 2013 at approximately 5:30 PM, DF was in his recording studio (a separate building on the property). A client was playing the piano at the time. DF walked to the adjoining kitchen to get a glass of water. When he looked out the window he noticed a large winged being descending from the sky. He described it as an 'owlman' with wide feathered wings that had a longer feather spaced 6-7 inches along the bottom edge of the wings. The head was round with large black circular eyes, small owl-like ears and a short hooked beak. The body was 5 foot in height and shaped like that of a human with legs, ending in 3-toed talon feet. The feathered body was light to dark tan. The wingspan was 18-20 feet. It was a huge and impressive sight.

The winged being seemed to be drawn by the piano music, in DF's opinion. It landed briefly near the back of the studio, then flapped its wings 3 times and quickly ascended into the sky. He mentioned the sighting to his wife and children, who said that he should report the encounter.

A few days later, DF was once again in the recording studio. There was another client playing a piano. As DF briefly stepped outside, he noticed the same winged being descending near the studio. This time it must have seen DF, then it quickly flew away.

DF is a bit old-school and didn't have a cellphone with him at that time. But he did sketch the winged being after each occasion (displayed below). After 6 years, he was finally convinced to come forward with his sighting. Any further information will be added to this report. Lon 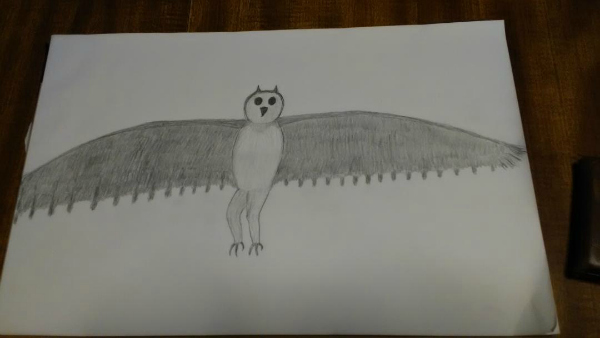 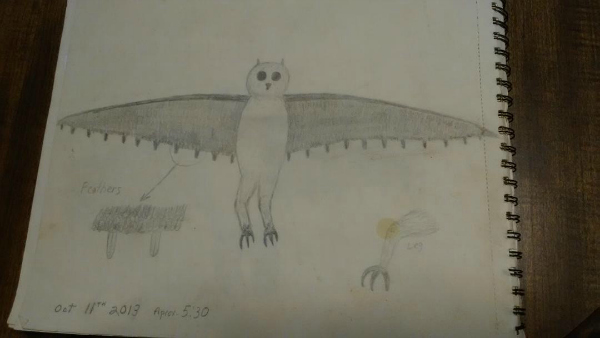