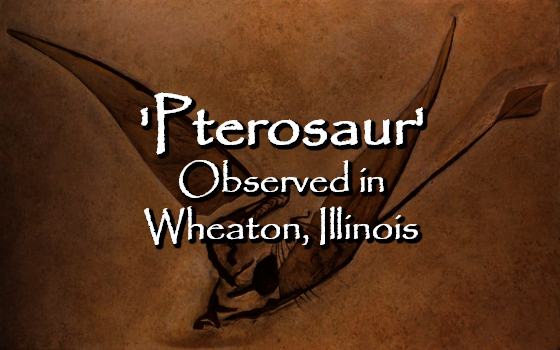 I recently received a telephone call from a witness 'KM' who described the sighting of a cryptid winged creature.

KM was driving on Jewell Rd., about 1/2 mile west of Gary Ave. in Wheaton, Illinois during the late afternoon of July 5, 2019. He had been helping a friend with a yard sale.

As KM was looking ahead of him, he noticed a strange form flying in the sky at an altitude of approximately 200 feet. The profile was that of a Pterosaur, in particular the long tail with a 'spade' on the end. The head was indistinguishable because of the angle, but the wings were wide and similar to the classic form. The creature was dark in color and propelled itself with slow deliberate wing flaps.

KM was able to observe the winged creature for 15-20 second and is positive that it was not a crane or heron, of which he is very familiar with. The wingspan was undetermined, but much wider than any known indigenous bird.

This is a continuation of cryptid bird and winged humanoid sightings in the Upper Midwest, in particular throughout the state of Illinois and Indiana. Lon

Recently received reports of Pterosaur-like creatures in Illinois and Indiana:

Huge 'Pterosaur' Observed at the Vermilion River in Danville, Illinois

Pterosaur-Like Being Seen Over Frankfort, IL


Have you had a sighting of an unknown winged creature, flying humanoid or huge bat-like being? Please feel free to contact me at lonstrickler@phantomsandmonsters.com - your anonymity is guaranteed. Our investigative group is conducting a serious examination of his phenomenon. We are merely seeking the truth and wish to determine what eyewitnesses have been encountering. Your cooperation is truly appreciated. You can call me directly at 410-241-5974 as well. Thanks...Lon Strickler
Mothman Dynasty: Chicago's Winged Humanoids