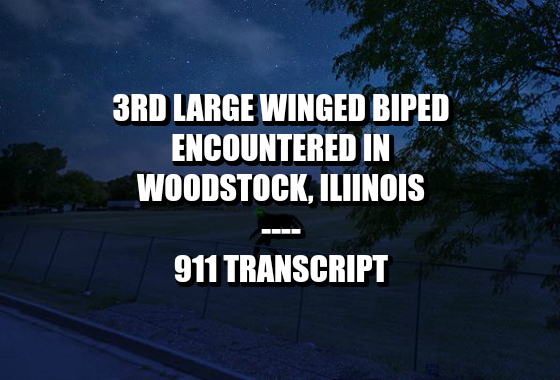 The Singular Fortean Society was contacted recently by a man who said he had seen an "unusual being" with wings and "bright green eyes" charge at him from the McHenry County Fairgrounds in the early morning hours of February 28th. The witness compared his encounter to a sighting that had been reported in Woodstock earlier in the month.

According to a message received through the Singular Fortean Society's contact page:

I was outside Jewel Osco in Woodstock, Illinois and believe to [have seen] the same visual of an unusual being in the McHenry County fairground. It screeched at me then charged the fence, about thirty feet from the fence, it had very bright green eyes, [and] had wings and was all black leathery colored. It ran back towards the woods in the McHenry County fairgrounds. I called [the Woodstock police department] and [they] had county sheriffs respond to the location.

Investigator Tobias Wayland attempted to contact the witness via telephone at a predetermined time agreed to by all parties, but was forced to leave a voicemail. The witness has not yet responded.

A Freedom of Information Act (FOIA) request for any information pertinent to the incident was then filed with the McHenry County Sheriff’s Office, and while an official report was not written, the 911 call information was released.

According to the incident detail report documenting the call, at 2:46 a.m. on February 28th, an officer responded to the 911 call of a man who said he’d seen a “mysterious creature described as being 7-8 ft tall and wearing all black” that “charged at him from the fair grounds screeching at him while he was in the Jewel lot and then it retreated.”

“[The witness] named the creature the ‘Dufield Pond Swamp Monster,’ since he had the first sighting with police involvement,” the report continued. “Investigation to continue.” 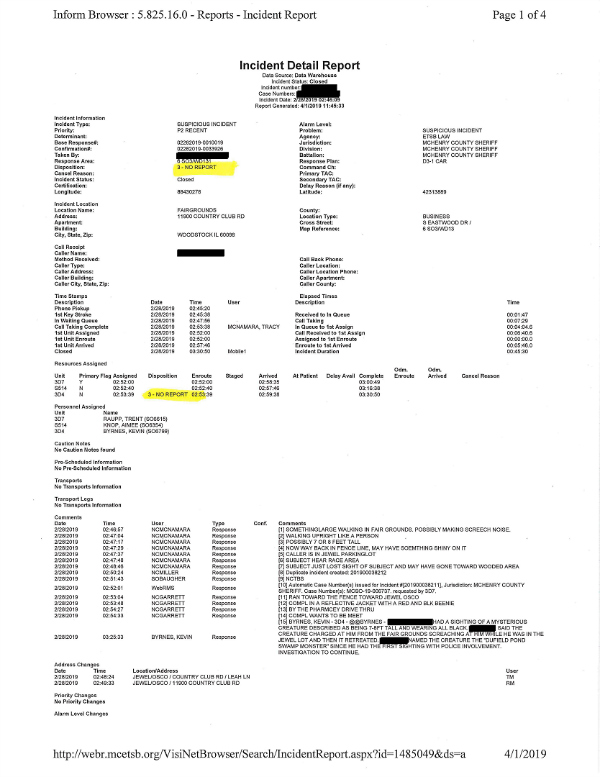 
Have you had a sighting of a flying humanoid or huge bat-like creature? Please feel free to contact me at lonstrickler@phantomsandmonsters.com - your anonymity is guaranteed. Our investigative group is conducting a serious examination of his phenomenon. We are merely seeking the truth and wish to determine what eyewitnesses have been encountering. Your cooperation is truly appreciated. You can call me directly at 410-241-5974 as well. Thanks...Lon Strickler #ChicagoMothman #ChicagoPhantom
This report will be included on the Chicago & Regional Winged Humanoid / Flying Entity Sightings & Encounters Interactive Map
Mothman Dynasty: Chicago's Winged Humanoids