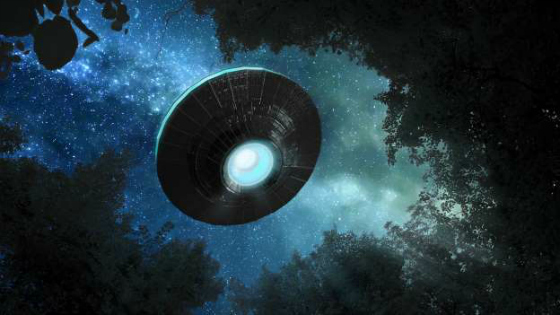 The following accounts were recently received:

“Years ago, approximately 2006, in the summer in Maine, I saw a UFO. I've studied and read about UFOs for many decades as a sort of hobby. The odd thing is that even though I know you need to document and report sightings accurately, I never even wrote the experience down until months later, and now don't even know for sure what year it occurred in. I remember the sighting like it's a photograph, and have made some drawings which I sent in to a website. I used the year 2006 in my report later, but that year is just a guess. I really feel a bit embarrassed that I don't know the year, date, time, etc. very accurately. Before the Maine sighting, back in the early 1960s, I had one unusual sighting of a neon green object which looked like a "green fireball" - like a natural shape rather than man-made, but very huge, totally silent. This was seen while camping out in Connecticut, at night around 10 pm. The visual size looked to be about 1/3 the size of the full moon, spherical with large chunks breaking off behind it as it flew along - completely silent - apparently in the very high atmosphere. Those are the only two sightings in my entire life. I'm now 65 (in 2018). The "2006" sighting looked like a horizontal cylinder in the sky, at the level of high cirrus clouds. It had cone shaped ends. The entire thing looked highly engineered and it had the appearance of transparent glass. I estimated the size to be a few hundred yards long, maybe 30 yards wide, but thinking back on it, I realize the size estimate could be way off - most likely the object was quite a bit larger than that. I saw this thing while wearing "Eagle Eyes" sunglasses, which are my favorite sunglasses ever - they really help my eyes a lot and seem to improve clarity and focus at long distance. This sighting occurred during the early afternoon, full daylight, partly cloudy. The object's attitude was at a right angle, transverse to its direction of travel. Rock solid flight, no bobbing or alterations in flight path. I rubbed my eyes quickly and took off my sunglasses, and it was still there. When it reached a spot just about directly over my head, it seemingly blinked out of existence.” - Jay Dillon

“People can say whatever they want, but I know for a fact that UFOs exist. I've seen a lot of lights in the sky, but one time I actually saw a huge craft that was the size of five or six 747s combined, maybe bigger, and didn't make a sound. It was maybe 200 or 300 feet up, so I got a good look at it. There's no way it was something of this world. If anyone is honest with themselves and has a decent education they will admit that, just based on the sheer size of the universe and how many billions of solar systems are out there, it would be impossible for earth to be the only planet inhabited by intelligent life. It would take an enormous amount of ignorance and arrogance to believe earth is the only planet inhabited by intelligent lifeforms.” - The Fireblaster5

Sedona, Arizona, USA “I lived in Sedona, Arizona between 1996 and 2010 (14 years) in the Village Of Oak Creek. In the fall of 1997, my brother who is an avid pilot, was visiting. He and I stepped out into the backyard to look at the stars. We looked up and noticed a triangular shaped object with 3 lights located near the tips. The craft was traveling from west to east, had no visible means of power, and made no sound. My brother said, 'those lights are not regulation'. At first I thought, 'It's someone playing a prank, possibly with an ultralight, this is Sedona after all'. But no propeller could be heard. It was not effected by air currents and maintained a perfect altitude with no pitch or yaw. The lights glowed, pulsed white to beige. I kept yelling for my wife who was indoors to come out as I wanted as many people as possible to see it. My brother and I watched it for about one minute. My wife finally came out and saw it just before it disappeared over the horizon. She missed out on an experience of a lifetime. The next morning, my brother and I were still in dis-belief. We said nervously, 'It had to be a military black project'. He does not like to discuss it as I believe he is in fear of losing his pilot's license and of course the ridicule. I have never seen anything like it before or since. Your a skeptic, until you see one. Then you understand that something is going on.” - cplusplusism

January 27, 2014 – Naples, Florida, USA “January 27, 2014. 8:30 PM. Naples, Florida. Approximately, no more than 100 meters high, flying from west to the east, was a dome shaped craft which had a bright light the color of a lit cigarette at the bottom of it which gave the rest of the craft a slight glow. It's like it glided through the sky with no effort. And no sound at all except the faintest whistling/humming sound. It passed by over my head so fast, by the time I ran around the house, it was miles away from me. All I could see was the orange reddish light from the craft as it glided through the sky miles from where I was. I see planes and everything else fly in the sky daily. It was no plane or any other type of aerial craft that any county in the world has. It glided through the sky like the Starship Enterprise off of Star Trek. I'll never forget it as long as I live. I was skeptic at first on whether the government was hiding information or not. Now, without a doubt of my mind, I know the government knows. We get visited constantly by craft from other worlds.” - Clay J 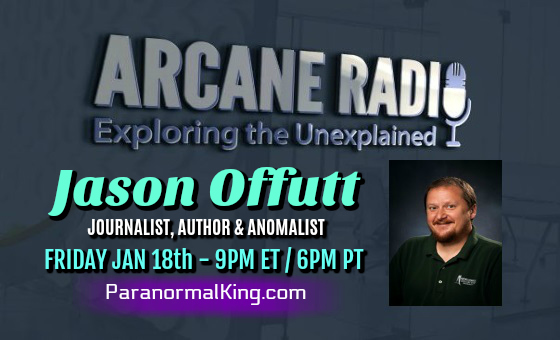 Facebook event announcement: Jason Offutt - Journalist, Author and Anomalist - Arcane Radio
Join me as I welcome journalist, author & anomalist Jason Offutt to Arcane Radio. Jason grew up on a farm near the little town of Orrick, Missouri. In his life he’s been a farm hand, journalist, photographer, bartender, and the mayor of that same small town. Jason now teaches journalism at Northwest Missouri State University in Maryville. He has written many books including “Darkness Walks: The Shadow People among us”, “Haunted Missouri: A ghostly guide to the Show-me State’s Most Spirited Spots” and “Paranormal Missouri: Show me your monsters”. You can find his website at jasonoffutt.com. This should be a very informative and entertaining show! Join us this Friday, January 18th at 9PM ET / 6PM PT on ParanormalKing.com - Meet us in the chat room...just click the banner or go to www.paranormal.olicentral.com
Listen to our podcast at Arcane Radio on Podbean or on my YouTube channel. You can also listen to the podcast at Arcane Radio on Stitcher - iOS, Android and the Webplayer. Please consider becoming an Arcane Radio patron. Thanks...Lon
**********

The Mysterious World of Real Golems

The Psychic Sasquatch and their UFO Connection

The Sasquatch People and Their Interdimensional Connection