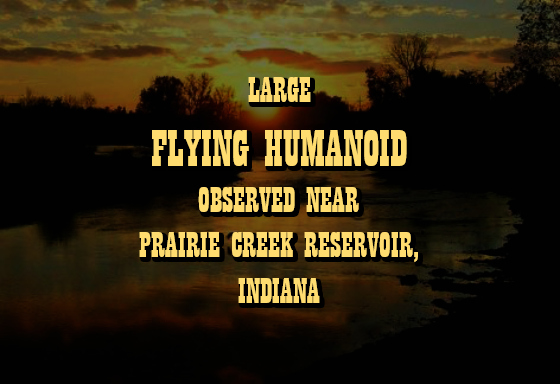 I received a telephone call from an eyewitness on Wednesday, January 23, 2019:

TH and his wife were traveling southbound on a county road, about a mile south of the Prairie Creek Reservoir near Muncie, Indiana. The date was December 26, 2018 at dusk. A huge flying object caught TH's attention.

TH is a military veteran, hunter, trapper and farmer who lives in the immediate area. His knowledge of military flying craft, wildlife and his keen sense of observance was apparent while I talked to him. The winged being that he was observing was unlike anything he had ever seen before. The creature was flying just above treetop level and was easily visible to the witness. His reaction was to slam on his brakes in wonderment, exclaiming to his wife 'do you see that?' His wife was shaken by the sudden stop and was unable to react fast enough to see the winged being.

TH stated that the being was humanoid in shape with an obvious 'face.' The body had a length of approximately 6-7 feet, with bat-like wings that were extremely wide. The being was dark-colored, and seemed to glide at a steady speed. He never noticed the flapping of wings while watching the creature.

TH's wife states that TH has been truly affected by the incident and has constantly mentioned it to her, in an attempt to explain what this winged being really was. He had refused to mention the incident outside of his family. When TH read about the recent sightings in Gary, Indiana, he called his wife from his job and asked her to contact me right away. He later called me when he got home. This witness was very forthcoming and anxious to find out what this creature was.


Have you had a sighting of a flying humanoid or huge bat-like creature? Please feel free to contact me at lonstrickler@phantomsandmonsters.com - your anonymity is guaranteed. We have received credible reports from the Chicago area / Illinois / Wisconsin / Indiana / Michigan / Pennsylvania / Ohio / Florida / Minnesota / Southern Ontario. Our investigative group is conducting a serious examination of his phenomenon. We are merely seeking the truth and wish to determine what eyewitnesses have been encountering. Your cooperation is truly appreciated. You can call me directly at 410-241-5974 as well. Thanks...Lon Strickler #ChicagoMothman #ChicagoPhantom
This report will be included on the Chicago & Regional Winged Humanoid / Flying Entity Sightings & Encounters Interactive Map
Mothman Dynasty: Chicago's Winged Humanoids