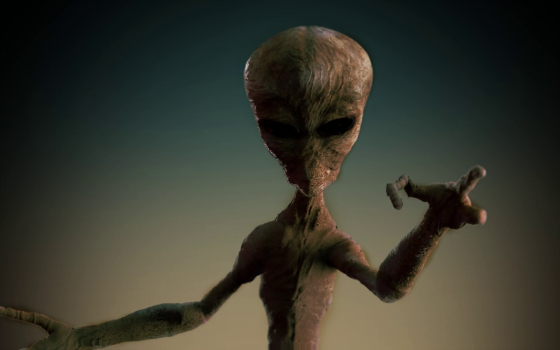 Vincent in Utah called in to tell of his weird encounter:

“One of my earliest thoughts from my childhood. I guess I was between 4 and maybe 6, I remember waking up and someone was leading me out of my bedroom and I couldn't turn around. I tried to turn around and look at him and I couldn't see them. What I remember, my parents were on the couch sitting straight up but they were just basically comatose. They were just sitting on the couch. I remember looking at them and it was just like, 'they are not yelling at me for being out of bed.' What were they doing on the couch? It wasn't a grey arm, it was more brown. It touched the side of my dad's head and he said, 'You will now feel pain.' and he winced. I don't know from there. I don't remember anything else, really. It was pretty strange. I can remember the color of the walls. I can remember the books that were open that they were reading, my parents. I don't know what that was. It was kind of a visitation type thing, maybe. I don't know. (Lewis asks if they were robotic or biological beings) I have no idea. It had a scent to it. It kind of smelled like rusted machinery, almost, they smelled like rust. That's all I could smell in my nose. It was a long time ago but clearly it was so scary, like, I couldn't turn around. I was trying to turn around to look and see what was behind me. It smelled like rot... just something that... it doesn't sit right, like it doesn't smell right. I don't know how to explain it.”

My Night in the Captain's Quarters

A person calling themself ScaredRiverRat wrote to tell of a weird experience he had:

“I worked on the barge lines on the Ohio River in the early 2000s. Being the low man on the totem pole, I was left with the ship while it was getting repaired. So just below Pittsburgh, in the winter, alone on the ship, I decided to sleep in the captain's room. Just as I was falling asleep on the first night, the covers pulled down and the mattress sank. I was not asleep yet so I know that I wasn't dreaming. I was so terrified that I jumped from the bed, ran off the ship (which was docked) in my underwear and socks, into the snow and up the hill to an empty lot. No one was around for miles. I was terrified until the negative zero weather forced me back inside. The ship was down for repairs so it was dead quiet except for the river running chunks of ice against the hull. I had electric hooked up but this was before the cellphone era so I had to 'man up' which is impossible to do with frozen testes. I head back to the captain's quarters. My belongings are thrown out of the room. I spent the next four hours in the galley, eating to stay awake and calm my nerves before the engineer arrived. Then I'm told about the captain that the ship was named for who died four months before I started in that bed. He was found sitting hunched over from heart complications. I refused to ever work on that boat again.”

It Watched Me From the Bushes

Newport, Wales, UK - 2015-06-15 - 20:35: We were taking an evening walk with the dogs at Cwmbran Masted Mountain and as we pulled up I noticed what I thought was a guy watching us from the bushes on the side. So I turned to see what I could see in the mirror and it was not there. But to our surprise it hadn't moved away but was still turning and pointing away and stopping to stare at us. I actually went to the spot where it was standing and there was an eerie feeling and a smell I've never smelled before...almost like a cinnamon type of smell I think? I personally am still back and forth trying to figure this out and the one night it was spying on me again from behind a rock, I went over to take a look knowing what I saw hadn't moved. But it was gone which I don't understand. There is a lot of strange activity there every night and I'm really hoping you guys can help me shed some light on this for me as I can't rest until I know more. I have many pictures some of which are enhanced for more detail but the pictures are actually screen shot from the video footage I took as I felt video footage is what I find better to capture frames and get more movements between frames which is what I've got. - MUFON 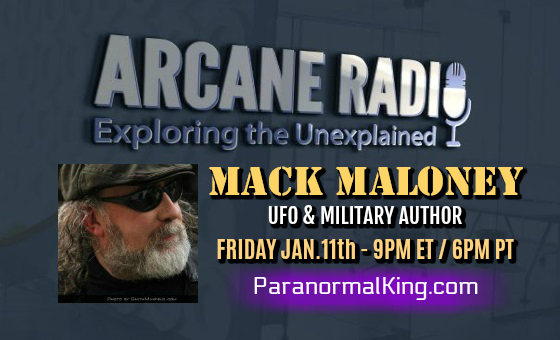 Facebook event announcement: Mack Maloney - UFO / Military Author and Radio Host - Arcane Radio
Join me as I welcome UFO / military author and radio host Mack Maloney to Arcane Radio. Mack has written more than fifty novels including military thrillers, men’s action-adventure, science fiction and historical fiction. He created the long-running 'Wingman' series, with one million copies sold. His most recent non-fiction title is 'Mack Maloney's Haunted Universe' and is the host of 'Mack Maloney's Military X-Files.' He has also worked as a consultant to a company working for the U.S. government on anti-terrorist programs. Mack is a native of Boston and a graduate of Emerson College. His website can be found at mackmaloney.com. This should be a very informative and entertaining show! Join us this Friday, January 11th at 9PM ET / 6PM PT on ParanormalKing.com - Meet us in the chat room...just click the banner or go to www.paranormal.olicentral.com
Listen to our podcast at Arcane Radio on Podbean or on my YouTube channel. You can also listen to the podcast at Arcane Radio on Stitcher - iOS, Android and the Webplayer. Please consider becoming an Arcane Radio patron. Thanks...Lon
**********

Is this proof the Tasmanian tiger is still alive? Farmer spots a mystery beast prowling through the bush – and it wasn't scared of humans

Holy cow! One-eyed calf is worshipped as a god in India


Alien Agenda: Investigating the Extraterrestrial Presence Among Us

The Alien Invasion Survival Handbook: A Defense Manual For The Coming Extraterrestrial Apocalypse

Military Encounters with Extraterrestrials: The Real War of the Worlds