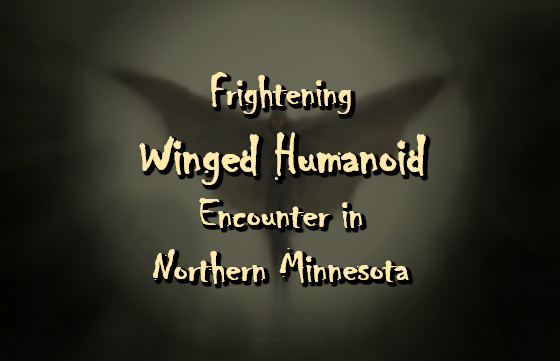 I recently received a telephone call from an eyewitness (DH), who encountered a winged humanoid during the summer of 2011:

DH had recently come across the Chicago area winged humanoid posts and subsequent reports I had received in 2017-18. This was the first time DH had been aware of these sightings. This is why DH contacted me directly, in order to report his experience from 2011.

DH and a companion were driving south on I-35, after leaving the Black Bear Casino and on their way back to Moose Lake, Minnesota. It was a clear moonlit night, approximately 2AM. DW was driving a sports car.

As he was driving, he observed a large winged being quickly descending from the sky in front of them. They first saw it drop straight down with wings horizontal and open. It was at least 1 mile away and what DH estimates at 2000-3000 ft. altitude. It literally looked like a human with wide bat-like wings, that spanned across both freeway lanes. The being glided towards the car, as if it was going to collide with the windshield. In fact, DH's companion coiled expecting an impact. DH braced himself for a collision, but suddenly the winged being flew over the vehicle. Both occupants were extremely shaken, to the point where DH pulled over onto the shoulder.

DH stated that the being was dark brown in color, with a shiny wet-like appearance. The wings were leather-like and quite large. The body was 5-6 ft in length and thin, with a narrow head that had pointed ears. The eyes were hollow and dark. The being never flapped or moved its wings, as if it had another means of propulsion.

DH never reported the encounter and felt that no one would ever believe him. He felt comfortable relaying the encounter to me after reading about the Chicago incidents.

NOTE: DH provided the following update the day after the above post:

"We both noticed and saw what looked like a wide, somewhat glossy object drop straight down superfast like a spider would do when it drops on its vertical web line to lower its self. As it dropped and stopped suddenly just feet above the horizon as it then instantly proceeded to glide towards my low profile sports car at, what I estimate, about the same speed I was heading towards it. So we are heading towards each other now at about 140 MPH. I saw it in my high beams as it headed directly towards my car’s windshield. I waited till it appeared imminent it was going to collide with my windshield which was about 20 ft. in my guess. My view of the wings, face, shoulders were brief but amazing before I ducked sideways while trying to maintain control of my car. The lower part of my body just went numb and with lower torso goose bumps in a way I have never experienced. This creature defied physics as it dropped straight down, not an angled glide. It is as if the air went right through its wings and did appear to drop faster than gravity could pull any object down. Its bat-like wings nearly spanned the two freeway lanes. It made no sense to us then or now."

DH is a well-known and respected professional in the entertainment industry. I truly believe that his report is consistent with other inquiries my associates and I have received concerning these winged humanoids. Lon


Have you had a sighting of a flying humanoid or huge bat-like creature? Please feel free to contact me at lonstrickler@phantomsandmonsters.com - your anonymity is guaranteed. Our investigative group is conducting a serious examination of his phenomenon. We are merely seeking the truth and wish to determine what eyewitnesses have been encountering. Your cooperation is truly appreciated. You can call me directly at 410-241-5974 as well. Thanks...Lon Strickler #ChicagoMothman #ChicagoPhantom
Mothman Dynasty: Chicago's Winged Humanoids