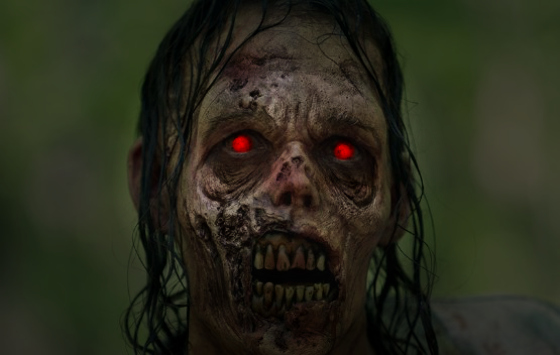 I'm a truck driver and we tend to see some of the most beautiful things this great country has to offer. However in contrast we see some of the most gruesome, from mangled road kill to cars and people equally unrecognizable. I will never forget what I saw that night. I was driving at around 0300 MDT along Wyoming's desolate I-80. That's when a thick fog rolled up on me seemingly out of nowhere and the air was almost electrified. I didn't pay much mind to it at that point just slowed down and put on my 4-ways and just kept truckin. That is until I thought I saw a person staggering away from a vehicle broken down on the shoulder. I was about to stop and call 911 when I saw it, a chunk of flesh fell from his face, then he turned and just stared with these bright red eyes. I was going about 5mph and quickly got it but up to 45mph when I saw another 20 or 30 walking along the interstate all with these bright red eyes and rotten flesh. I didn't dare to stop until I got to Ft. Bridger. It was then that the fog cleared and I noticed an Army convoy breaking at the truck stop I was at. They then proceeded out in the direction of what a couple other truckers told me are known as the Wyoming zombie walkers as they will walk any given stretch of highway or back road in that state, looking for their next human victim. A lot of weird things out on these roads and any trucker will tell you if you can stay home at night do it, cause ya never know what's around that next corner or waiting just beyond the reach of your lights. - NG

“My aunt saw a black panther man when she was a kid. Ever since I had experienced paranormal activity I started polling people, asking if they've ever had anything paranormal happen to them. At dinner at my aunt and uncles I asked them and she said when she was maybe 7 or 8 years old she was playing in a creek in the woods behind their house in the middle of rural Illinois. She heard a noise and looked up to see a tall, muscular black panther man looking at her as he just walked by. She said she was scared to death but the creature was almost beautiful. She watched as he just walked away out of sight. He did not threaten or do anything other than look at her as he passed. At the time I had not heard many or if any of these animal/human sightings so I thought it was interesting and I believed her but it was the first time I'd heard of a cat-man. My uncle who is very meat and potatoes logical said he had not experienced anything paranormal and he just smiled as my aunt told her story. They asked why I was interested and I told them that I'd experienced some supernatural things and now I make a point to ask people if they've experienced anything. My uncle quoted Carl Sagan and said, "Extra-ordinary claims need extra-ordinary proof." But my aunt was not embarrassed and stressed that she indeed saw it and she'll never forget it. That must of been ten years ago and I now know these encounters are somewhat more common than I once thought. You have the Egyptians depicting cat-man, bird-men, dog-men etc. Stephen King's The Dark Tower writes about these entities working with The Men In Black in another dimension. In that story they're called the Taheen. So is it a demon shapeshifter? Are there actual cat-men entities from another dimension that slip into our reality from time to time. Is it a genetically created hybrid monster from some government program? Perhaps aliens created this hybrid as a vessel that demons can possess like an avatar to walk around our realm. Maybe it's like the were-wolf phenomena but a were-panther. I have no idea but the possibilities are endless.” - Human Jones 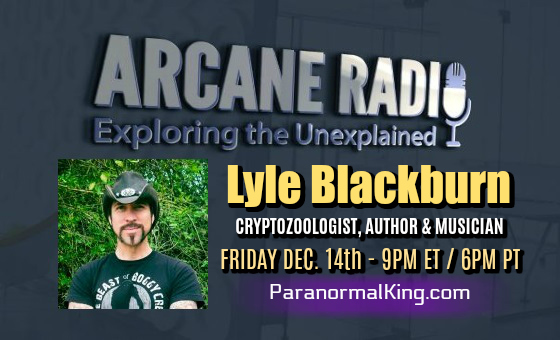 Facebook event announcement: Lyle Blackburn - Cryptozoologist, Author and Musician - Arcane Radio
Join me as I welcome cryptozoologist, author & musician Lyle Blackburn to Arcane Radio. Lyle has written several acclaimed books, including “The Beast of Boggy Creek” and “Lizard Man,” whose subject matter reflects his life-long fascination with legends and sighting reports of unknown creatures. Lyle is also the founder of the rock band, Ghoultown, columnist for the horror magazine, Rue Morgue, and narrator/producer of documentary films such as “The Mothman of Point Pleasant”, “Boggy Creek Monster” and "The Bray Road Beast." Lyle is a frequent guest on radio programs such as Coast To Coast AM, and has been featured on numerous television shows airing on Animal Planet, Destination America, Discovery Science, and A&E. When Lyle isn’t writing books, hunting monsters, or performing with his band, he can be found speaking at various cryptozoology conferences and appearing at horror conventions around the United States. This should be a very informative and entertaining show! Join us this Friday, December 14th at 9PM ET / 6PM PT on ParanormalKing.com - Meet us in the chat room...just click the banner or go to www.paranormal.olicentral.com
Listen to our podcast at Arcane Radio on Podbean or on my YouTube channel. You can also listen to the podcast at Arcane Radio on Stitcher - iOS, Android and the Webplayer. Please consider becoming an Arcane Radio patron. Thanks...Lon
**********

The Levitating Stone of Shivapur, a Controversial “Miracle”

Stephen Curry said the moon landing was faked, but let's all pretend he didn't

Haunted Hills and Hollows: What Lurks in Greene County, Pennsylvania