Phone Call From A Nightmare 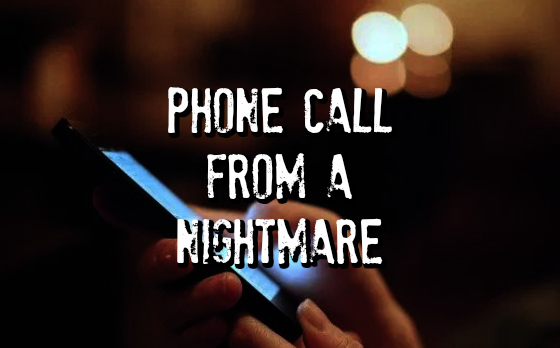 “When cell phones first started to get popular my mom bought me, my sis and herself all a new cell phone...on the condition that if she called that we always answer no matter what. No excuses. Every time.

One night I was walking up my long country driveway after we had a big snowstorm. I had a 2wd car and couldn’t make it up so I would park at the bottom. I started walking and my phone went off. It was a text from my mom, but there was no message. Just a blank screen. As I was holding it the phone went off again and again and again. One after another. About 10 times. All text messages from my mom with no message. Just blank. I was thinking what the hell is this. Then my phone rang right when I was at the door. It was my mom. I said hello and the first thing she said was, 'I have been texting you why didn’t you respond? Where are you? What are you doing?' I said, 'Mom I am literally walking in the door right now.' Which I was. Most nights my mom slept on the couch because my dad is a crazy dreamer. He would kick and punch my mom in his sleep. The couch was perfectly visible from the front door when you walked inside my house.

Anyways all the lights were off in my house as I walked in. I was just telling my mom I was walking in the door she said she really needed to talk to me when I got inside. To come talk to her. I was kicking off my shoes at that point and I couldn't see anything. I said, 'Ok' and my mom said, 'I love you.' I said, 'I love you too' the moment I was flipping the light switch to the walk in light inside my house where everyone took off their shoes. I was literally looking at my mom fast asleep snoring on the couch as I was saying, 'I... love.. you... Too.' Then I was looking at my mom sleeping as I heard the phone click from the caller on the other end hanging up. It couldn’t have been my mom. I was so confused and scared and just in shock. My brain could not compute what happened. As I was standing there shaking and trying to grasp what happened I could hear my mom moaning in her sleep. She was obviously having a bad dream. A nightmare. I turned on the living room light and I shook my mom awake. She flew up into a sitting position in a panic. Tears in her eyes. She was in full mom panic mode. She said she was having the worse dream that I had been killed in a car crash. She explained how she was desperately trying to call me and text me in her dream, but she couldn’t dial the numbers right. No matter how hard she tried to open up a line of communication with me she couldn’t get her cellphone to work right. Which I have had the same kind of nightmare myself. Udder frustration and panic. As she told me about her dream I must have turned white from pure shock and confusion. She noticed and asked me what was wrong with me. I told her what happened. How she had texted me a bunch of times with blank messages back to back 10 times and I also told her about the phone call. I told her exactly what happened.

We were just dumbfounded is the only way I can put it. Just pure confusion and excitement at the same time. There are no words to describe the way I felt that night. We decided to look at our call history on our phones, but there was none. It was like it never happened, but it did happen. As sure as the sky is blue. I know it happened. My mom knew I was telling the truth too. When the phone bill arrived that month there was no record of what happened in the statement either. Super strange. Super weird. I will never forget what happened that night. It changed me forever. I don’t discount crazy stories people tell because I know crazy sh*t and impossible sh*t happens. I know because it happened to me!” - Eyeseeu

NOTE: Very unusual. I'm not sure I have ever heard or read a similar account. Lon


A Field Guide to Lucid Dreaming: Mastering the Art of Oneironautics

Dreamwork for the Soul: A Spiritual Guide to Dream Interpretation

Dream Messages from the Afterlife

The Encyclopedia of Dreams: Symbols and Interpretations