'Black Bigfoot' Encountered Along I-40 in Eastern Tennessee 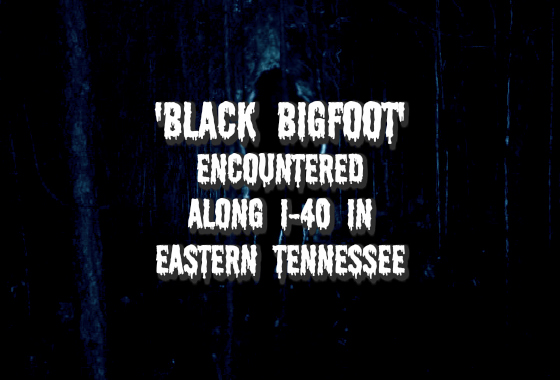 I received a telephone call on Saturday September 1st from a truck driver who claimed to have had an encounter with an 8ft tall hairy hominid. The incident occurred on Thursday August 30th at approximately 12:30 AM.

The witness stated that he was traveling eastbound on I-40 between Nashville and Knoxville, Tennessee. He had been having trouble with the right headlight on his rig going on and off, so he pulled off near the 334 mile marker, a few miles west of Roane County.

He pulled back the hood in order to work on the headlight. He had a super bright LED flashlight with him. As he was examining the headlight, he heard movement in the trees behind him. The trees were only 20-25 feet away, and the sounds were similar to those of a person walking.

He pointed the flashlight in the direction of the trees, when he instantly noticed bright 'eye shine' looking back at him. As he continued to observe, an unknown creature stepped out into the open. He was mortified because he had never seen anything like this. I asked for a description. He stated that is was an '8-foot man with long black hair all over its body' and that the face looked 'strange...deformed.' He also stated that it had a 'narrow waist, huge wide shoulders and no neck.' I asked if he thought that it was a Bigfoot. He hesitated and stated 'I suppose it was, but it didn't look like the ones I've seen on TV.'

The being stood beside a medium-sized tree and simply glared at the witness. There were no sounds, though it slightly swayed side to side. The witness said that it stood silent for almost 20 seconds, then ducked behind the tree. It continued to watch the witness, who quickly closed the truck hood and left the area.

The witness stated that he has been an outdoorsman and hunter in eastern Tennessee for most of his life, and that he had never encountered anything like this before. He regularly travels I-40, usually twice per week. I asked if he has ever heard of similar encounters by other people, which he responded 'I've heard stories, but never believed that those things existed around here.'

The witness found my sighting report advertisement on Google and decided to call. He stated that he was hesitant to make a report, but the encounter 'shook me up so bad' and 'I felt I needed to tell someone.'


Beyond Boggy Creek: In Search of the Southern Sasquatch

Sharing the Mountain with Bigfoot: The First Year (Bigfoot Series)

Bigfoot Nation: The History of Sasquatch in North America