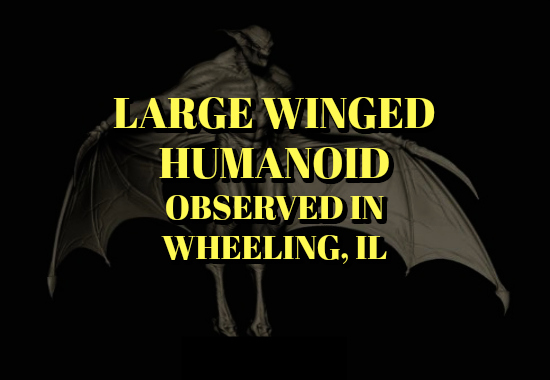 I received a telephone call on Tuesday May 1, 2018 at 12:50 AM ET. This was approximately one hour after the incident.

The witness was calling for his parents, who stated that they witnessed a large winged humanoid flying above the trees and creek behind their residence. They were in the residence and observed the being for up to 30 seconds. They went out on their balcony to get a better look and possibly get a photograph, but the winged being had moved south and out of vision.

When I was talking to the witnesses' son, I could hear them in the background...they seemed a bit shook and had their son make the call.

I asked the son to get as much information as possible and to forward it to my email. I received the following email the next day:

Monday 4/30/2018 - 10:50 PM CT - Wheeling, IL - Seemed to be around 6 ft in height, the wings were sticking out as if they were arms at the front of the body. The wings seemed to be perfectly stretched out with no movement of flapping to keep flying, but yet it kept gliding above the creek in the back of our apartment. The wings weren't straight flat although perfectly stretched out. They were facing upward in an angle. Flew over (REDACTED) and disappeared into the woods in the back of the (REDACTED). This thing was also flying at 10 mph or so. This was witnessed by 2 people not just a single person. Husband and wife both saw this. BF

NOTE: I was later told that the wings were like those of a large bat and dark in color. The witnesses shared their names and contact information with me. A Task Force member plans to visit the location. This sighting has been added to the Chicago & Regional Winged Humanoid / Flying Entity Sightings & Encounters Interactive Map


Have you had a sighting of a flying humanoid or huge bat-like creature in the Chicago, Illinois metro area or nearby? The entity has also been referred to as the 'Chicago Phantom', 'Chicago Mothman', 'Chicago Owlman' & 'Chicago Man-Bat.' Please feel free to contact me at lonstrickler@phantomsandmonsters.com - your anonymity is guaranteed. Our investigative group is conducting a serious examination of his phenomenon. We are merely seeking the truth and wish to determine what eyewitnesses have been encountering. Your cooperation is truly appreciated. You can call me directly at 410-241-5974 as well. Thanks...Lon Strickler #ChicagoMothman #ChicagoPhantom
PLEASE NOTE: The Task Force has decided to hide some specific location information in future winged humanoid reports. We are attempting to limit witness harassment by other investigators. I'm sorry it has come to this but, unfortunately, the continuous unscrupulous and uncouth methods deployed by these other individuals has resulted in this directive. My apologies...Lon
Mothman Dynasty: Chicago's Winged Humanoids