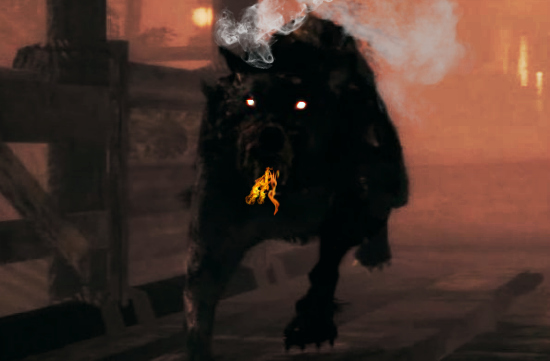 21-year-old Raymond, in Texas, wrote in to tell of his bizarre experience:

“A couple of years ago, I was driving my girlfriend of the time home late one night. We stopped at an intersection near her neighborhood where I decided to look down to change the song playing on my phone. When I looked back up, I saw a large black dog run right in front of my headlights. My girlfriend said, 'Whoa, did you see that?' I replied, 'Yeah, it was just a dog.' 'No, that dog looks weird,' she said. Right there and then it passed in front of my lights again. I was terrified when I noticed it had no features but more like a solid black mass in the shape of a dog. It ran past my window and I noticed it had what seemed like smoke coming off of it. 'What the F is that?' I screamed. It circled around and went past my girlfriend's window going directly into my car's beam of lights again. As soon as it cleared them, I floored it and sped off down the street. We both couldn't believe what we had seen.

When we got to her house, we sat in the car and tried to process what had happened. She broke down in tears and revealed to me that an uncle of hers had seen the dog we had just seen shortly before he passed. She said what we had seen was exactly what he had described to her family. He said he felt it was death coming after him. I comforted her as she she cried and tried to play tough but deep down I was absolutely terrified. Was it there for her or for me?

A couple weeks later I was driving alone one night down a dark country road that I would usually cruise on the weekends. Everything was normal when I noticed something moving just out of the beams of the light of the car on the edge of the road as I drove. I slowed down and was shocked to see what was revealed by my headlights. It was that dog again but this time it was running alongside my car as I drove. I was terrified when I suddenly remembered that the speed limit for this road was 70 mphs. This thing was keeping up with me. It was exactly like I had seen it before. A large black mass with smoke coming off of it. As I glanced back and forth between the road and it, I slammed on the brakes. When I turned to look at it, it's head was backwards, not turned, and it was looking right at me with glowing white eyes. I'd never been more afraid in my whole life. I immediately did a U-turn and hauled ass back into town. I was shaking the entire way home. Was what I saw a Hellhound or something else? Are these things associated with death? My grandfather passed shortly after these events. I've spotted the dog a couple of times since then while driving but but only for a brief moment as I passed it.”

'Grey' Scurried Through My Bedroom Door

Mid-March 1991 at 11pm in Wisconsin we were laying in bed sleeping when I was awaken by a loud noise and very bright lights in our bedroom window. I sat right up to see what was going on and a grey scurried thru my doorway. I yelled 'get out' but no sounds came out and I couldn't move. I yelled again but no sound, 'get out, I'll kill you, get out.'

The grey ran around to my wife's side of the bed and 'I yelled don't touch her, leave her alone, leave her alone.' I still couldn't move. All I could hear was 'don't worry, everything will be ok' over and over. I don't know how much time passed but it seemed like a while.

Suddenly it turned and ran out the bedroom door, the bright lights in my window faded, heard a rumble and then I was able to then move again. I ran out the door after it to the front entry but it was gone.

3 weeks later my daughter was born with a scar on her right side. It took years for me to talk about what happened. I'll never forget it as long as I live.

Visitation of beings into my home where I actually 'heard' a voice from the being.

I was visited during the wee hours of a morning as above-defined. There were several beings in my room. I felt their presence and 'heard' a male-type voice telling the other begins, 'She's awake.' I could NOT open my eyes. I could NOT move my body. It was as if an electrical shock wave was keeping me bound tightly together. I could hear everything going on around me. My clothing was being pulled out of my closet as I could hear the hangers scraping the clothes hanging pole; my dresser drawers were being opened and closed and my books on my shelves were being pulled out one, by one, as if "they" were looking for something.

I then felt a small 'head' by my head as I was lying on my pillow and I kept telling myself to 'open your eyes!' I could not. The presence said "She will not remember this." But I still do to this day. I also felt something implanted in my uterus that was a triangular shape. I have since had my uterus removed last year. I got horrible cramps for three days after the visitation.

I also had a visit from these same beings when I was a little girl in Texas back in 1958 or 59, if you are interested. I know I have been chosen as a 'study project' of some type. - NUFORC

End of the world 2018: Will the Rapture occur on April 23? SHOCK prediction says YES

Ghost of Michael Jackson haunts Las Vegas show: 'He’s right there on the stage with us'

The Monster Book: Creatures, Beasts and Fiends of Nature

I Am the Word: A Guide to the Consciousness of Man's Self in a Transitioning Time

Real Monsters, Gruesome Critters, and Beasts from the Darkside