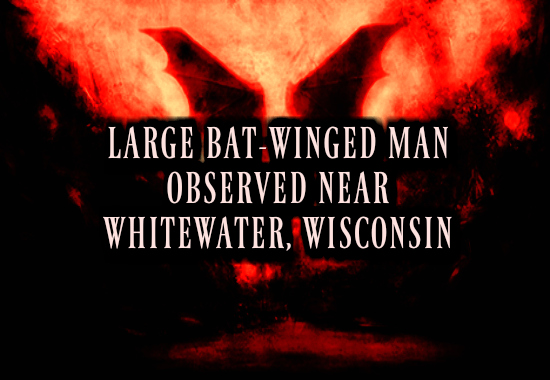 On February 19, 2018 I received a telephone call from a witness in southeast Wisconsin.

In late September 2016 at approximately 10PM CT the witness was driving east on E. State Rd. 59 (S. Janesville St.) approximately 7 miles west of Whitewater, Wisconsin. She was heading home after visiting her daughter.

Suddenly a 'man-like' being with huge pterodactyl-like wings glided in front of her and behind another car...flying from right to left at an altitude of 10 feet or so above the road. The witness was totally shocked at what she was seeing. The being's body was definitely human in shape...about 6 ft. in length and the wingspan was at least twice the body length. The wings were membraned like that of a bat and never moved or flapped. The entire being was dark in color. There seemed to be a structure along the top of its head, but no eyes or facial features were seen.

The witness' reaction was to hit the gas pedal and to get out of the area. The driver in front of her must have noticed the winged being as it emerged from the right and sped away as well.

She had read my recent post in reference to the sighting in Chippewa Falls, and was advised by her husband to call and inform me about what she had encountered.

There are other sighting reports from southern Wisconsin and northern Illinois that the task force is currently investigating.

NOTE: I'm going to include this sighting to the interactive map, since it is within 100 or so miles from Chicago. The witness had told very few people about her encounter but decided, with her husband's encouragement, to come forward and call me. Her demeanor was a bit anxious, though she seemed relieved to unburden herself. Lon


Have you had a sighting of a flying humanoid or huge bat-like creature in the Chicago, Illinois metro area or at another location? The entity has also been referred to as the 'Chicago Phantom', 'Chicago Mothman', 'Chicago Owlman' & 'Chicago Man-Bat.' Please feel free to contact me at lonstrickler@phantomsandmonsters.com - your anonymity is guaranteed. Our investigative group is conducting a serious examination of his phenomenon. We are merely seeking the truth and wish to determine what eyewitnesses have been encountering. Your cooperation is truly appreciated. You can call me directly at 410-241-5974 as well. Thanks...Lon Strickler #ChicagoPhantom
In accordance with 15 U.S. Code Chapter 107 - Protection of Intellectual Property Rights, any use of witness information, which includes any attempt to contact a witness or persons involved in an event, is strictly prohibited without the written consent of 'Phantoms and Monsters' and/or its associates. These witnesses put their trust is us, and we intend on honoring their requests. Chicago Phantom / Owlman / Mothman / Man-Bat / Flying Humanoid Reports - Chicago Metro Area - Interactive Map