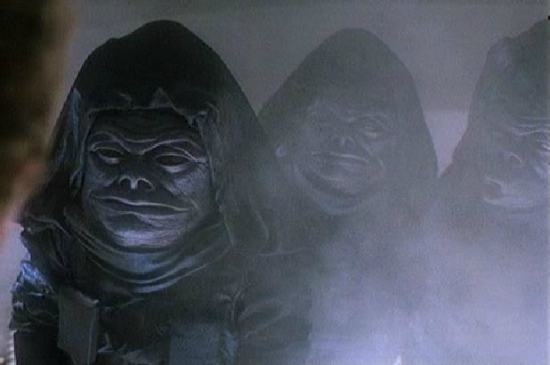 Vienna, Virginia - 2017-10-01: I sleep sitting partially up and I can see the door to the bedroom clearly. I awoke to a bright light under the door, originating in the hall beyond. The door opened and in walked several (I am not sure of the exact number) squat figures. They were silhouetted by a bright light in the hall. They were dark blue/grey with large, blocky heads and virtually no neck. Their faces were heavily furrowed. They stood 3 to 4 feet tall, and wore something that looked like monk robes that were very dark grey. When they entered the room, I became paralyzed. They stood around the bed, even on the other side where my wife was asleep. I tried to call out to her but I couldn't make a sound due to the paralysis. I sleep with a CPAP machine (mask and air hose) for sleep apnea. One of the figures removed the mask from my face. Another pulled the covers back off of me. They raised their arms and I floated up out of the bed, lying flat now. I floated above their heads toward the door. As I began to float out the doorway, I lost consciousness.

The next thing I remember is floating above their heads back into the room toward the bed. I was angry, very angry, and with great effort I began to thrash about a little. For some reason they had difficulty controlling me through my anger. One of the figures on the far side of the bed next to my wife knocked something over on the dresser, but immediately righted it and put it back where it belonged. They regained control of me. They successfully floated me back into bed and pulled the covers back over me. They then retreated from the room. After they closed the door, the light went out and all was quiet.

I regained my senses and found myself lying in bed without my CPAP mask on. I looked at the clock and it was 5:53 am. I got up out of bed, feeling both frightened and angry at the same time. I got up out of bed and started my day. In the morning my wife said that she had been up 3 times to go to the bathroom during the night which is unusual for her. She usually only gets up once, and rarely remembers much about it.

I searched the internet and was not able to find any pictures or drawings that resembled the figures. Then I bought a reference book and found a drawing that is almost identical. I have attached that image to this report. (MUFON removed image) - MUFON

NOTE: If you're familiar with the film 'Communion,' the description seems similar to the 'blue men' aliens. Lon

Followed by the MIB

“I had an experience with my mom. We were on a back country road in North Florida, out by an old abandoned airstrip. It was around 1 PM in the afternoon in the spring back in 2004. We were driving down a 2 lane grey top road and as we came around a bend in the road we saw a black 1984 Cadillac parked off the road. It was backed up to a fence with two men sitting in the front seat. The both had black suits, black hats, and black sunglasses on. They sat there completely still as we drove by. This is the last thing my mom remembers clearly. I remember we kept driving for a few seconds and suddenly they were behind us following our car. The next thing after that, they had completely vanished. There were no turn offs on this road or side streets. The was no dust, cloud, or dirt from pulling off the road or hitting the brakes suddenly. It's just really weird. My mom said she vaguely remembers their car being behind her, but she's not 100% sure.” 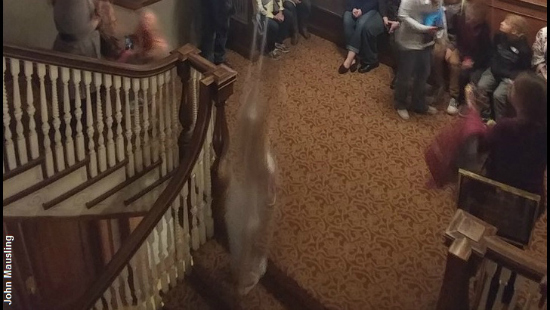 A photograph taken at the Colorado hotel that helped to inspire Stephen King’s bestselling novel “The Shining” shows what appears to be two “ghosts.”

The Mausling family of Aurora, Colorado, participated in a “spirit tour” at the 108-year-old Stanley Hotel in Estes Park last month. After returning home, they noticed a photo taken by John “Jay” Mausling that seemed to show a young girl walking down the stairs.

John Mausling and his wife, Jessica Martinez-Mausling, told HuffPost via email that there were no young girls in their 11-member party or on the tour.

“At first we tried to be logical and think we somehow missed her so we asked our kids, their girlfriends and our friend if they remembered seeing a little girl,” they wrote. “Nobody did. We do not remember seeing anything on the stairs when we took the picture.” Read more at ‘Ghosts’ Caught On Camera At Famed Stanley Hotel In Colorado

The mystery of graveyard headstones from Fort Worth, found masquerading as a front-yard sidewalk 70 miles east at a rural Hunt County home, has been partially solved. But the Precinct 4 Constable is still searching for a few more answers.

"He stopped and he goes whoa,” Constable Kent Layton said of the construction worker who made the unexpected find. "They were flipped over with the writing down,” he said.

The recently purchased home had a sidewalk leading to the front porch comprised of 20 face-down grave markers.

"They started somewhere in this area over here,” Layton said at the home in southern Hunt County of FM 36. “They had poured concrete around two or three of them to get them started to stay together."

"He was thinking that he may have uncovered a cemetery, a grave of some sort,” he said of the construction worker hired by the new owners. "It's unusual for somebody to use headstones for walkways. That's kind of creepy in my opinion, but that's just me."

Leaving him with the creepy questions: how did headstones of military veterans, an infant from 1956, a mother and grandmother with her name chiseled out, and the majority of the headstones with a death year of 1974, end up here as someone's sidewalk?

After searching a few of the names of the headstones, the trail led 70 miles west to Fort Worth and the Mt. Olivet and Greenwood Cemeteries where a cemetery director says they've located the actual graves, and the headstones are not missing. The ones that became a sidewalk back in Hunt County appear to be mistakes with spelling and date errors or were rejected by a family because they were the wrong color. They are not stolen.

But Constable Layton is still trying to reach the previous owner of the house to find out how they got here.

"I still want to know who put these here and how they got the stones to start with," he said.

What IS that? Horrific ‘alien sea monster’ washes up on beach in chilling video

The Monster Book: Creatures, Beasts and Fiends of Nature