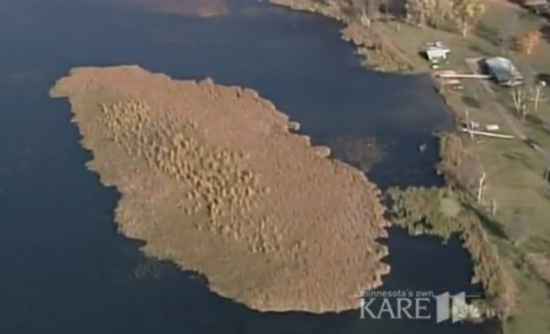 What the Heck? Wandering 'Bog Beast' on Minnesota Lake

MERRIFIELD, Minn. - North Long Lake is a long way from Loch Ness. But the Brainerd area lake now has its own monster.

“There’s never been one ever seen this large before,” says Bill Schmidt, president of the lake association. “It’s kind of the wild beast of North Long Lake right now.”

A floating bog – the size of three football fields – broke off from shoreline late last week and started wandering.

“When it was out in the middle of the lake and the wind was blowing, it was just a monster coming at you,” says Schmidt.

Indeed, the crumbs of several smashed docks are now part of the traveling bog.

“Came down this way and just crushed these docks,” says Schmidt, pointing at the remnants of one such dock.

Jeff and Kathy Coombs will be getting their boat lift off the lake tomorrow.

“We saw what it did to the neighbor’s docks and lifts and no way do we want that to happen to ours,” said Jeff Coombs.

“There’s cattails in there, there’s bulrush in there,” said Schmidt. “There’s probably even a hundred trees in there. We’re looking for help on how would you take this thing and put it back where it belongs and anchor it.”

Tow trucks and thousands of feet of cable were twice used to move and anchor a large wandering bog in Barron County, Wisconsin, most recently in 2011.

On Monday, calm winds allowed the bog to settle on one end of the 6,000-acre lake. In the short term, Schmidt says lake property owners need “a lot of prayers, that it stays here.”

North Long Lake has already had enough of its beast of a bog. - Wandering ‘beast' of a bog wreaks havoc on Minnesota lake

Driving Through a Black Void

“Summer '97. I was driving home from a city 135 miles south, where I had visited with friends. Driving on a 4 lane going north I pull out to pass a semi truck and as I got next to the trailer I looked over and suddenly everything forward was like fading into a black void. I have no idea of anything till I came out of the void just down the road from my house. It was night time and it felt like I slipped back into reality with a slight disoriented feeling. I was WOW! I drove to my house and pulled in the driveway still shaken over what happened. Getting out of my car, I look it over all around for any damage since I have no memory driving 120 miles. I was sleepy and groggy as I checked the time. I left the city around 8:30 and the sun was still up to my left in the west. It was now 11:30 at night. I entered my house and went straight to sleep. Next morning I still know something weird happened and went back out to check for damage on my car. None to be found as I was left with a mystery to remember. Where did I go when entering that black void at 8:30 and then come out of it at 11:30. That 120 mile drive home should have been 2 hours and not 3.”

This happened many years ago when I was very young. Probably 6 to 8 years old around 1967. (yes, I know, I was very young but I can still distinctly recall what I saw or think I saw) I lived on the outskirts of a small mining town in Fayette County, southwestern Pennsylvania. We lived along an alley with another neighbor on the same side. My grandmother and a family friend (all Italian immigrants) lived on the other side of the alley. My mother was visiting the family friend (my dad had just passed away a few years prior) and I recall crossing the street one evening at dusk or early evening to join her. Crossing the alley, I heard a type of noise that sounded like a when a rocket is launching. Looking up I saw an oval shaped saucer that looked like two oval plates placed on top of each other. There appeared to be flames shooting out the back. I recall seeing what appeared to be like windows or recesses along the bottom and it appeared illuminated because I could see these details. Guessing maybe it was about 100 feet long and about 500 to 800 feet high. The object seemed to be following the direction of the alley from my right to left. I don't know why, but I don't think I ever spoke about this to my family and I don't recall anybody else seeing this. I still to this day ask myself If I really saw it. Dave

“When I was around 8 or 9, I was going to climb the tree at my grandparents in Bessemer, Alabama when I saw a strange oversized beetle looking bug that was probably about 2 feet long and bigger around than a basketball. It had wings that were very very loud. It left me frozen with shock but immediately flew quickly out of my line of sight then gone altogether. I've never ever forgotten it and wonder about it often. I'm absolutely certain it happened.”

Dulce Base Underground / The 1979 Alien Firefight

Cover-up Possible as UFO Landing is Investigated in Brazil

Argentina: A Triangular UFO in Mendoza (1976)

The Origins of 25 Monsters, Ghosts, and Spooky Things


The Super Natural: Why the Unexplained Is Real

The Gods Never Left Us: The Long Awaited Sequel to the Worldwide Best-seller Chariots of the Gods

Mojave Incident: Inspired by a Chilling Story of Alien Abduction