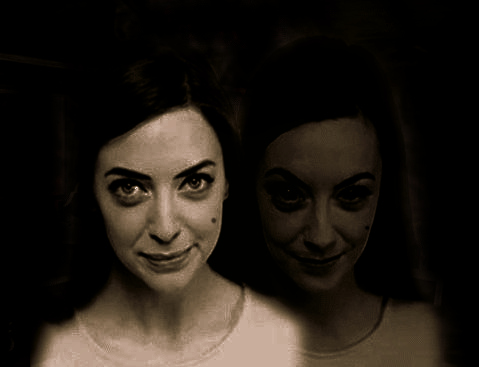 My Doppelganger at the Mall

“When I lived in another state, I had a friend say to me one day, 'When did you start working at the mall and why were you acting like you didn't know us when we came in and we were talking to you? Can't you talk to friends when you're on the job?' (Her and her husband) I said, 'I don't work at the mall and I didn't see you'. They both started laughing. I asked, 'What are you talking about?' They said, 'So you're serious, you're trying to tell us that we both saw you and were talking to you, but it wasn't you.' And they both looked at each other trying to figure out if I was crazy or if they were.

A week later, another friend asked me if I liked my job at the mall. She wondered too why I was acting so strange when she came in to say hello. Again, I said I didn't work at the mall and she just looked at me as if to say, 'Haha ya, right.' After a third friend, and please note, these were close friends, asked me about my new job, I decided I really had to meet her.

I went to the store at the mall, but looking around I didn't see anyone that looked like me. As I turned to leave, I heard someone say, 'What, you can't say hi on your day off?' I walked up to them and said I wasn't the girl who worked there. They said, 'Well not today at least, eh?' I just said, 'Well, see you later then', and turned and walked out. I tried catching her at work about five times and always managed to go in on her day off. Then, one day I thought I'd try again. I walked in, looked around and someone approached me and said, 'Geez, where have you been? We've been calling you for days. Why haven't you showed up for work the past two weeks? The manager is mad, but he said if we see you, your paychecks back there in the managers office.' I tried to explain that I wasn't their employee and my friends had told me I looked like her. The guy said, 'No kidding, because I can't tell you apart. The girl even has a mole on her cheek right where you do!' I wish I could remember what her name was, not even sure if I ever heard her name. It still baffles me to this day."

Archaeologists may have become a step closer to finding the grave of St. Nicholas, more popularly known as Santa Claus, as they discovered what may be the actual grave of the Christmas saint below the surface of a church in Turkey's southern Antalya province, reports said Monday.

The head of Antalya's Monument Authority Cemil Karabayram told the daily that they came across an untouched shrine while conducting digital surveys below the surface of the church.

"We believe this shrine has not been damaged at all, but it is quite difficult to get to it as there are mosaics on the floor" Karabayram said, adding that they need to scale each tile one by one and remove them as a whole in a mold.

The official continued by saying that they examined all files from 1942 to 1966 regarding St. Nicholas' remains and found out that the church had been burned down but was reconstructed. Read more at Turkish archaeologists claim to have discovered 'untouched grave' of Saint Nicholas of Myra

'Psychic' Was Paid $3.5M For Exorcisms

BOSTON (AP) -- A purported psychic who charged an elderly Massachusetts woman more than $3.5 million for exorcisms and "spiritual cleansing" has pleaded guilty to evading taxes.

Between 2007 and 2014, prosecutors say a Martha's Vineyard woman paid Johnson more than $3.5 million for services that claimed to rid the woman of demons.

Prosecutors say Johnson didn't report the income and tried to hide the money so she wouldn't have to pay taxes on it.

Johnson pleaded guilty in the federal court in Boston Thursday and has agreed to repay the woman. She's expected to be sentenced in January.

A Citrus Heights man who appeared on the reality TV show "10 Million Dollar Bigfoot Bounty" was arrested over the weekend on accusations he violated state Fish and Wildlife laws in Sierra County, authorities said.

Justin Samuel Smeja, 31, faces felony charges of perjury and filing a false or forged instrument with the state. He faces misdemeanor accusations involving bear tags, as well as unlawful taking and possession of an animal, Nevada County Jail reports state.

"There are some alleged games being played with those tags for hunting deer and bear," said Capt. Patrick Foy, with the law enforcement division of the California Department of Fish and Wildlife. Read more at Reality TV Bigfoot hunter, Justin Smeja, faces hunting charges in Sierra County

Why those TV ghost-hunting shows are transparently fake

The Search for the Pale Prophet: Who were the mysterious 'white gods' whose memory is kept by Native Americans?

Reality Denied: Firsthand Experiences with Things that Can't Happen - But Did

DNA of the Gods: The Anunnaki Creation of Eve and the Alien Battle for Humanity