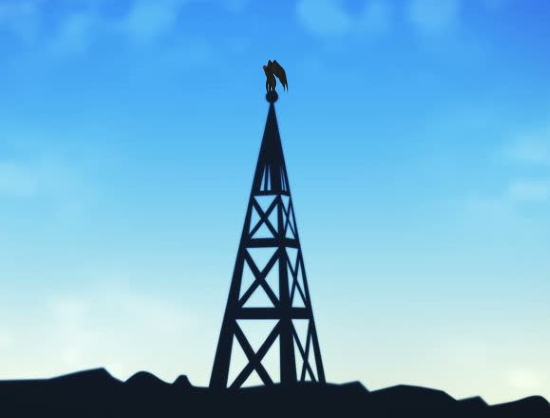 Well, I've debating about reporting this for a couple of months since I first learned about you and the Chicago sightings in the Higherside Chats. That show was a big "a-ha!" moment for me.

My own sighting occurred around a year ago in central Indiana. It happened during the late summer/early fall, around 5-6pm. Sorry I'm light on specifics, the experience was so surreal to me that I didn't document it well in my mind.

As I was driving in a highly populated suburban area outside of Indianapolis, I came to a stoplight at a busy intersection. That was when I saw something large, black and winged perched atop a nearby radio tower. I just saw it in my peripheral vision, the tower being about a 1/4 mile or less from the intersection.

I glanced over fully and of course it was gone. I couldn't explain it, but had a very strong impression that I had just glimpsed a being from another dimension, interacting with mine. I fully believe that what I saw from the corner of my eye was there in that moment and then gone the next.

Thanks for all of your research on this subject, I'm glad to know I'm not alone! IH

Kentucky: All I know is that I was in bed and woke up in my kitchen. But this is where it gets weird. I don't remember anything, but when I woke up I had a picture on my phone and it looks like I'm in some kind of laboratory and I think I may have a picture of inside the lab if I was being worked on...but its blurred. But you can see a alien with a orange jumpsuit sitting on a chair and there are apparently tubes and hooks on the wall. This really freaked me out. - MUFON

Doctors in Kentucky are trying to figure out what caused a little boy to stay asleep for 11 days.

His mother says the second grader was behaving normally until he went to bed the night after his uncle’s wedding.

Doctors say Wyatt fell into a deep sleep while undergoing medical tests. When he finally woke up, he had limited mobility and is now working to regain his strength. - Boy Slept For 11 Days, Doctors Investigate Mysterious Illness

Man Blames His Crimes on Aliens

SHEBOYGAN - A 31-year-old Sheboygan man is facing multiple charges after telling officers that aliens made him vandalize a home in the 900 block of Kentucky Avenue several times over the past three weeks — including trying to set the home on fire.

Inphachack, who said he is diagnosed schizophrenic, said aliens made him vandalize the home.

According to the criminal complaint:

Over the past three weeks, the Sheboygan Police Department took five separate reports of damage and vandalism to a home and vehicle at the address.

The first graffiti was reported Sept. 11 by new owners of the property, who are in the process of renovating the home to live in. The letters "DNA" were spray painted on the home in black.

Over the next several weeks, the owners also reported the front window of the home was smashed out, a dent was kicked in their van, and someone tried to set fire to the home on two separate occasions. Read more at Aliens made me do it: Man vandalizes Sheboygan home

The Science of Dracula


Skookum: The Hunt For Bigfoot

Tales of the Cryptids: Mysterious Creatures That May or May Not Exist (Darby Creek Publishing)

Bigfoot in Pennsylvania: A History of Wild-Men, Gorillas, and Other Hairy Monsters in the Keystone State