Daily 2 Cents: Invasion on Chestnut Ridge -- Elevator...With a Mind of It's Own -- Wild Boar Rampage Through German Town 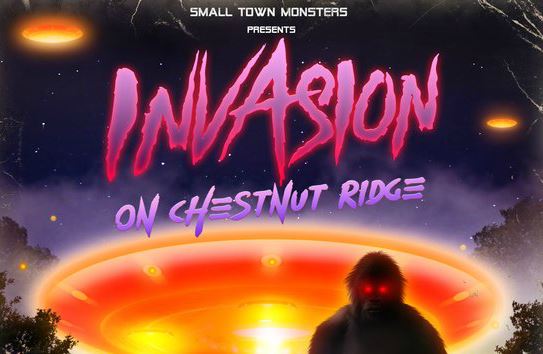 and DVD. The film will screen at the Canton Palace Theatre in Canton, OH on October 28th! The terrifying “invasion” comes in the form of various phenomena that have been seen by ordinary people living in the area since the 1800’s.

Just in time for Halloween, learn all about the multitude of bizarre events that have occurred in the area with special attention being paid to the following: A mysterious UFO crash. Unusually large, possibly prehistoric bird attacks. Strange lights in the forest that seem to stalk those that witness them. Horrifying alien encounters, and of course, no scary story is complete without a cadre of tales centered around huge, upright walking hairy critters.

The story is told mostly through eyewitness accounts and through interviews with those who investigate bizarre occurrences along the ridge. It features spooky reenactments and a slew of unsettling animated sequences (by artist, Chris Scalf) along with a number of unnerving illustrations by artists Matt Harris and Brandon Scalf. A new trailer was just released spotlighting just a few of the dramatic moments captured in the film.

Invasion on Chestnut Ridge is the fifth film in the award-winning Small Town Monsters series of paranormal documentaries, following the critical and commercial hit, The Mothman of Point Pleasant. “Mothman” and “Invasion” were both funded through a Kickstarter campaign last year which raised over twenty four thousand dollars. Invasion was filmed in Pennsylvania over the summer and features interviews with local investigators and eyewitnesses. It is produced and directed by Seth Breedlove and written and narrated by Mark Matzke with cinematography by Zac Palmisano and an original score by the award-winning, Brandon Dalo. The film’s poster is created by renowned horror artist, Sam Shearon.

Next year Small Town Monsters turns their attention to Flatwoods, West Virginia with their sixth film, The Flatwoods Monster. It will be followed in June by Aleksandar Petakov’s On the Trail of… Champ. A Kickstarter campaign to fund the production of the films will launch on January 26th. A handful of STM films, including Invasion on Chestnut Ridge, will screen at Minerva Monster Day, a yearly event held in Minerva, OH. This year’s event will take place June 16th and features author and frequent Small Town Monsters-collaborator, Lyle Blackburn, and author Loren Coleman.

Elevator...With a Mind of It's Own

“I hate elevators. I didn't use to when I was a kid, but after some strange elevator rides on the city college's campus in the math building, I don't like riding them. My sister and I were taking Algebra (since neither of us managed to get our transcripts to the college in time for them to count, and thus had to take placement tests.) She was pregnant with her first kid at the time, and was having a difficult pregnancy (which actually ended with her having an emergency c-section before the semester was over). We would take the elevator to the floor our class was on. The building itself was set up weird. There were three floors, but it was the second floor that was ground level. The first floor was below the level of the rest of the campus, having been dug down so there was a small open area with stairs leading to it, the second floor, and then the third floor, which would normally be the second story if it were a normal building.

We had all sorts of problems with the elevator. It would go up, and end up a couple inches below the floor when the doors opened, and slowly move into the correct position, and do the opposite on the way down...it always freaked me out. But the weirdest thing that happened only occurred one time, and I think that was the last time we took the elevator. My sister was having a bad day, and we got into the elevator after class. I hit the second floor button, the doors closed, and down we went. Straight to the first floor. I swear it took the same amount of time it would've taken to get to that floor as it would've to get to the second. I started to step out, and we realized we were on the wrong floor. It had skipped our's. So, shrugging it off, we hit the second floor button again, making sure it was pressed, and it went back up... Straight to the third floor. We were both kinda freaking out by then, so we took the stairs, much to my sister's dismay.”

BERLIN (AP) — Police say a pair of wild boars have gone on the rampage and injured at least four people in the northern German town of Heide.

Authorities warned people to stay indoors after the adult boars appeared early Friday and began aggressively attacking pedestrians. Public broadcaster NDR reported that at least one man had a finger partially bitten off.

Police said one of the boars was shot and killed outside a bank but the other is still on the run.

How Much of What We Believe About Ancient History is Really True? Thinking Critically about Myths and Legends

The Oral History of John Titor, the Man Who Traveled Back in Time to Save the Internet