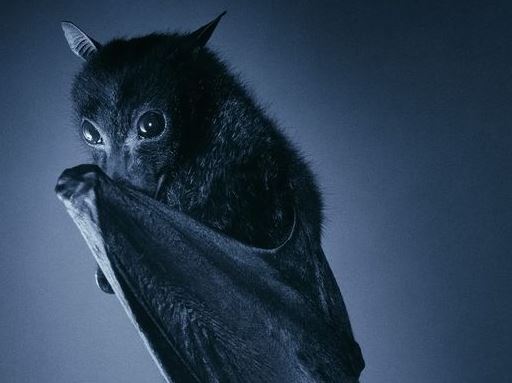 “Growing up in the mountains of western NC I once saw a bat that was the size of my bedroom window. I had a large utility light attached to the house right outside my window and would watch bats swoop in and eat the bugs at night.One night when I was about 8, I was up late excited about school starting back the next day. I heard something hit my window and when I looked up to see what the noise was, I was amazed to see a large bat setting on my window ledge. The bat was the size of my entire window (about 4 foot). I wasn't scared at first more amazed. I walked up to the window to get a closer look and spent a few moments looking at this creature. The bat opened his wings and I then got scared as I thought it was a vampire. I ran out of room screaming and, of course, my parents thought I was nuts. This was over 25 years ago (1992) and I still remember how the skin of the bat looked."

On August 25, 2017 my wife and I were traveling southern east on New Mexico highway 550 in our motor home. We were about 30 miles northwest of Cuba, NM when we left the highway for a short time looking for a camp ground. After realizing the camp ground was 35 miles south and out into the desert we returned to highway 550. Shortly after returning to the highway we we're cruising at about 60 mph and we we're quiet, not talking. I had noticed before the event that we we're entering an area where they had cut away a area of a high hill that seemed to leave a 40 to 60 ft high cliff on the north side of the road. As we came close to where the event occurred the only thing in sight was a truck coming, which was about a quarter mile away. As we entered the area of the cliffs I noticed a flash of white light that came from my left, I instinctively loomed to my left. I saw 2 creatures setting about a foot apart inside of a craft. They we're within 30 ft of us and got closer as I passed by. There seemed to be no windshield as we would call it. They were dressed in a light green matching uniform. Behind them was a panel of what I would call "heaving light". The creature in my left saw me out of the corner of his eye and made a strange facial expression and turned his head toward me, and in a flash, they disappeared. I saw the small control panel, his eyes in detail, his left hand, their slim body. I saw inside the vessel and was amazed with how beautiful it was. I could not see the outside shape of the vessel, but I did see everything inside. My wife says they went back into the cliff. I do feel the craft turned away from me. But where it went, I don't know. - MUFON

A man who lived with the decaying bodies of his dead mother and twin brother for more than a year said he didn’t report their deaths because he was traumatized.

Robert James Kuefler, 60, was charged last week by police in White Bear, Minnesota, with interference with a dead body or scene of death, a misdemeanor, according to “Inside Edition.”

The macabre living situation crime came to light in September 2016, when neighbors asked police to check on Kuefler’s residence.

Responding officers said the house had the stench of decay. They found the skeletal remains of Kuefler’s mother Evelyn in an upstairs bedroom, and the mummified corpse of his twin brother Richard in the basement, according to the Minneapolis Star Tribune.

Autopsies on the bodies showed both died of natural causes; Richard in July 2015, and his mother a month later. Read more at Man Lived With Corpses Of Mom, Twin Brother For A Year, Police Say

Spread across 400 acres of Kentish countryside, the ancient woods of Dering have long been rife with tales of ghosts and ghouls, making them a prime destination for documentaries about the paranormal.

But the popularity of shows such as Celebrity Haunted Hotel Live and ITV’s Strange But True has forced the Woodland Trust to hire a security firm to deter hundreds of ‘ghost hunters’ who have descended on the woods, leaving mayhem in their wake.

The trust has spent £41,000 protecting Dering Woods from the damage caused by visitors pitching camp in the hope of witnessing the apparition of a gypsy woman who accidentally burnt herself to death or a schoolmaster who hung himself and is now said to haunt a local lane.

It has also been forced to spend £6,000 on clearing litter and debris left behind by the ghost hunters who, after spending the night in the woods, abandon their tents and fires the following day. Read more at Ghost hunters accused of damaging ancient woodland featured on TV

The world’s top UFO experts ‘are being murdered, one by one’, conspiracy theorists claim

This Abandoned Ghost Town In Alaska Is Downright Bone Chilling


The Government UFO Files: The Conspiracy of Cover-Up

Operation Gladio: The Unholy Alliance between the Vatican, the CIA, and the Mafia