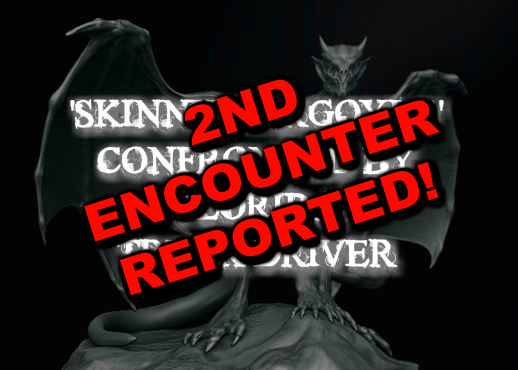 On September 22, 2017 I received a report of a winged gargoyle-like being encounter along a Florida road. There have been an increased number of sightings & encounters, similar to those in the Chicago area, that are surfacing nationwide.

I was contacted by AP who stated that a driver, who was filling him for him one night two weeks prior, encountered a winged being between his third and fourth stop near Zephyrhills (on Rt. 98 / US 301 at about 3:30PM). He said the driver saw this "thing" floating stationary about 15 feet off the ground next to a tree:

"As he got closer he realized it looked like a dark-colored humanoid in a cannonball position just floating in the air. Like frozen. He said by the time he asked himself "WTF is that?" The creature unraveled itself and it spread out its legs and giant bat-like wings. He didn't know what color the creature was but he said it was definitely a dark color and it had human-like legs. And he said at the same moment it spread its wings and legs it flew toward his truck at an unrealistic speed like a fighter jet. He said he almost crashed the truck in the ditch because it basically paralyzed him with fear. He said it happened so fast he didn't get a look at the face but he said it was probably between 5 and 6 feet tall and dark colored and it had human legs with bat wings. He also said that about a 1/2 mile before he saw the creature he saw a bunch of dead deer on the side of the road. Like piles of deer, 2 separate piles of at least four deer. He assumes it was eating them. The witness is a pretty soft-spoken dude and intelligent. The way he tells the story, I can tell it really freaked him out."

Following the link for further information.

Last night, I was once again contacted by AP with the following information:

"Hey Lon. This is AP. I spoke to you on the phone a couple weeks ago about how one of the drivers on my route saw the monster up in Zephyrhills, Florida. Well, I wanted to update you and tell you that I was off of work a couple nights ago and the guy who covered my shift,a different driver from the original email I sent you, also saw the creature. He texted me early in the morning and told me he was a believer now because he also saw the thing. His description was that it was tall like 6ft or so. He said it was dark gray and he also said that it had a big wingspan. Its body was very skinny and in segments like an ant. Thorax, abdomen, etc. He said it flew over the road from right to left. He said it flew so fast that it was hard to really make out what it definitively looked like. It was in the same area as well. But instead of on Rt. 98 it was on US 301 which is a road that 98 leads to. US 301 is a much longer and a darker road than Rt. 98. He also said that there were deer everywhere. So I'm starting to think that this thing eats deer. Also I'm starting to think that the full moon has something to do with this creature's activity. But obviously I'm just guessing. I'm driving out there right now, so if I see anything I will obviously update you again. Have a good day."

NOTE: I plan to talk to AP soon. I am asking anyone who is familiar with the area or who has seen something unusual, to please contact me. The Pasco County, Florida area is well-known for strange activity...I have documented several bizarre incidents over the years. Thanks. Lon

Pasco County, Florida: Including its History, The Charles B. Anderson House, The Zephyrhills Downtown Historic District, The Withlacoochee State Trail, and More

Florida Authentica: Your field guide to the unique, eccentric, and natural marvels of the real Sunshine State