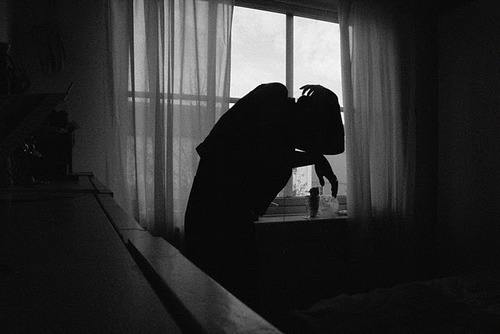 “When I was 10, I contracted Hepatitis A. I was really ill, like for a month didn't say anything to anyone. I mean I was just a kid. Well it progressed and by the time they caught it I was close to death. I was all yellow, my eyes, skin, everything and in severe pain. I was admitted to the hospital. Didn't have parents. My sister had guardianship of me. She like dropped me off and I never saw her again. I was hospitalized for a month or more. I was on pain meds. My liver was inflamed and it was impossible to eat.

One night I awoke because I felt a presence...at the foot of my hospital bed were two little Reptilian men. They were about 4ft tall. Needless to say I JUMPED out of my hospital bed tearing out my IVs, making the alarms going off at the nurses desk. I crawled under my bed the nurses had to coax me out. Think of it, a 10 year old child awaking to see lizard men in their room. As fast as it occurred they were just gone. I've not spoken of this in years. Only told 2 other people in my life.

There was another time in about 2006 or 2007, my husband fell asleep on the couch...so I left him and went upstairs to bed. Mind you, my room was dark, okay, really dark. I said my prayers went to sleep. Sometime during the night I awoke to this thing sitting on top of me! I started to wrestle with this thing, and let me tell you it was DARKER than my room! It was NOT sleep paralyzes. I WAS AWAKE! This thing was tangible. I could feel it! All of a sudden it was just gone, as the green lizard men. I jumped up and grabbed a cross I had hanging in my wall, laid back down prayed and fell back to sleep. I don't care if people believe these things happened, in fact I've had lots of experiences with weird things. I’ve ONLY been SCARED two times, the time the lizard men were in my room, and another when I awoke and felt a presence in our home, was turned facing the wall. And in my heart I knew if I turned to look there was gonna be something or someone there. Ignoring it, I fell back asleep.”

NOTE: This is not the first time I have heard or read of Reptilians and Shadow Beings plaguing certain victims. There does seem to be a connection somehow. Many of these encounters occur in hospitals and nursing facilities...so there may be an association with near-death or severe illness. Could it be ethereal...or corporeal? Lon

Buffalo, NY - 1998-06-06: I was inside of my home and heard noise. I got up and looked out of the front window. I wasn't sure what I was seeing at the time, until years later. I saw something disk shaped rolling down the street towards an abandoned train station. It was sideways so the sharp edge was scratching along the street as it rolled down. I remember seeing military personal chasing it down as well. I was a little girl so who knows if it could have been just a dream I had. Because I don't remember anything else past that point and I was scared. But I do remember that there was no crack in the middle of my street before that night. But in the morning when I went out and looked there was a crack all the way down the street and no one believed me when I told them my story and said I was just dreaming. - MUFON

This week our guest will be pterosaur researcher & author Jonathan David Whitcomb...as well, we will be discussing any recent 'Chicago Phantom' reports. Jonathan's most recent book is 'Modern Pterosaurs.' Please join us on Wednesday, August 2nd - 10PM ET / 7PM PT - go to www.arcaneradio.com and click 'Listen Live' to listen & chat. Call in 570-478-0902

At its surface, Dublin Lake may be a family-friendly body of water – offering the region a place to fish, swim, and recreate – but dive deeper and you might not like what you find.

Legend has it that a yet-to-be-classified form of sea monster dwells in caverns at the deepest point of the lake, which is 100-feet according to New Hampshire Fish and Game.

While those who have allegedly seen the monster have been driven mad, that doesn’t stop some lake-goers from hoping they find Dublin’s underwater cryptid.

“I would’ve died to see it,” said Maurica Smith, 24, of Milford, who went diving in Dublin Lake recently to obtain her scuba diving certification. “I could have had proof that it was real.”


Have you had a sighting of a flying humanoid or huge bat-like creature in the Chicago, Illinois metro area or nearby? The entity has also been referred to as the 'Chicago Phantom', 'Chicago Mothman', 'Chicago Owlman' & 'Chicago Man-Bat.' Please feel free to contact me at lonstrickler@phantomsandmonsters.com - your anonymity is guaranteed. Our investigative group is conducting a serious examination of his phenomenon. We are merely seeking the truth and wish to determine what eyewitnesses have been encountering. Your cooperation is truly appreciated. You can call me directly at 410-241-5974 as well. Thanks...Lon Strickler #ChicagoPhantom

The Strangest Inventions Known To Man

This newsletter is licensed under a Creative Commons Attribution-Noncommercial-No Derivative Works 3.0 United States License.
Hotlinking of PM Media images and copyrighted material is strictly forbidden unless permission is obtained.
'Phantoms and Monsters' and 'phantomsandmonsters.com' is protected under the Lanham (Trademark) Act (Title 15, Chapter 22 of the United States Code)
'Phantoms and Monsters' was establish in September 2005 as part of PM Media
Copyright 2005-2017 Phantoms and Monsters / PM Media - All Rights Reserved
Lon Strickler at 5:03 PM
Share
‹
›
Home
View web version