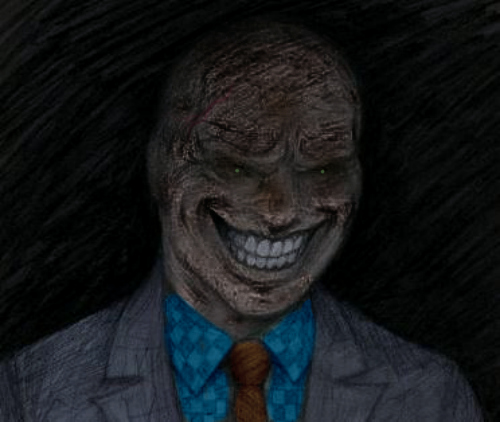 In early April of 2017 I required a CAT scan at a local hospital here in Nashville, TN. I'm sitting in the waiting area with a couple of other people. Each person was called and taken in by a woman. I was the last one left, waiting for an unreasonably long time, so I kept looking for anyone to call me for my scan. After a while, I became restless, so I got up and looked in the CAT scan hallway, but nobody seemed to be there. I walked over to another area with a reception desk, but no one was there either. I thought they must all be on a lunch break and I was not happy. So I went back to my seat.

A few minutes later, The CAT scan hallway door opens and I'm expecting to see that same woman asking me to come in, but this time a man came out. The only words that I can write to describe him are that he was bizarre and downright hideous looking. Exceptionally tall and thin. He had on a strange looking suit and tie. His eyes were a just slits, his skin was scarred and he was completely bald. My initial thought was 'there is no way that this guy works here.' He looked so horrid. He would simply scare children and half the people that needed scans. He also had the most insidious wide grin. I really wasn't scared, but completely perplexed why this guy would be allowed to work in this environment.

He called out my first name and took great pains in pronouncing it. I followed him in and sat on the scan table. He went around the corner, but kept looking at me through the window. Then he was gone. I waited for several more minutes, until two other men came in to do my scan. I don't know why, but I didn't ask about the weird looking man. In fact, I actually forgot about him. That was until I was at a friend's home a few weeks later and her sister dropped in for a visit. She mentioned that she worked at the same hospital in the Radiology Department. So I asked her who the bizarre man that works there was. She gave me a bewildered look and told me that she had no idea what I was talking about. She asked me to detail his appearance to her. She again confirmed that no one with that description worked there and became somewhat hostile at my insistence at what I saw.

A week later, I went to my doctor for the results. His word were 'I'm sorry, this is quite unusual. Your CAT scan is missing. The scan and report vanished and couldn't be found.' Now I wonder if the weird grinning man was responsible. NL

Stones Rain Down on Indian Village

Everyone has heard the snow fall or rain from the sky, but have ever heard of stones rains. It sounds really strange to hear you but this is true. In the Mandla district of MP, the stones are raining from the sky in Phulasagar village. Roof of roofs and seamanded cloths have broken off due to heavy stone rains. In Darshal, Thakur Mohalla of Phulasagar village of Mandla district, a strange incident is occurring in the last 24 hours, due to which the whole village is in panic. Stones are falling behind people even on the streets, but these stones do not fall on any villager. From the last 24 hours, rocks have left the houses in rural panic. The villagers claim that in their village suddenly began to rain large stones on the roof of the house, causing breakdown of capsules and seamanded cloths. Initially it was a mischief of somebody. After that the villagers ruffled the whole village, but no stone throwers found.

The villagers have now started to understand it as a divine outbreak. Now the villagers have gathered in the worship of the people. The village's panda is praying to stop stone rains from the deities. He says that he has seen such a phenomenon for the first time in his life. He hopes that the divine outbreaks will be removed from worship. From this incident the women and men of the village are all living in panic. The scared villagers have stopped eating and drinking. Fearlessly, the entire village has come out of its homes on the streets. The Deputy Speaker of the District Panchayat can also be from this event. They say that they do not believe in superstitions, so as soon as the incident came to light, they themselves reached the village. During the conversation with the villagers in the village, when suddenly huge stones came in front of their eyes, their eyes were torn off. - This place is getting rid of stones, full village in panic

(1)I was walking northbound from my parked truck to enter the building I work in.

(2)I have always kept my eyes on the sky, even as a child. I have seen many unidentifiable craft in my days and my grandfather worked for Boeing and Rockwell. This helped create my interest in the sky watching at a very young age.

(3) At first glance I thought that the object was a hovering helicopter, a bunch of balloons, or possibly a drone of some sort. The lack of noise or lights made me discredit the possibility of this object being a helicopter or drone. I work in the aerospace industry now and my company is 5 to 10 miles from LAX. There are multiple flight paths that I observe daily to my admiration of aircraft. There are also a large number of military flights that take place in this airspace, but the military craft are usually helicopters and not jets. They are always very loud and noticeable. V22 Ospreys fly over the 110 South and then hook a right westbound over Rancho Palo Verdes quite often as well.

(4) When I first observed the object I was facing west from my location and I was under the impression that it was hovering in place. In retrospect, it may have been advancing towards my position because this was the only point in my observation that I was under the impression it may have been hovering. Once I noticed it was moving I also noticed it was doing so at a steady pace. It was traveling north east slightly (more north direction than east) and I observed it slowly adjust it's path and change direction from north east to north west. It appeared to be attempting to morph. Despite the surface of this craft moving around in a very unstable and liquid type motion it's velocity and trajectory were stable. It was almost like a cloud of heavy metallic black liquid but it's overall shape remained relatively uniform. The nature of this object made it very hard to focus my vision on despite the fact that the craft was dark black and the grey clouds and sunrise made the sky very contrasted against the color of the craft. I felt as though it was tricking my eyes into looking at the clouds above it instead of the craft itself. Shortly after it changed direction (north east) it began to shift it's shape more noticeably and it went from a big morphing liquid blob to an elongated and very small boomerang type black craft that was no longer morphing. It seemed to become completely solid at that point. Once again with no lights or sounds. Almost immediately after it shape shifted, It began to shrink in size at a extremely impressive rate.

(5)I have witnessed many different types of unidentified objects and this was by far the most troubling and emotional sighting. I felt shocked and scared and for once I felt terrified instead of intrigued or awestruck. I have seen lights, orbs, but never anything like this.

(6) It shrank in size until it was gone. Either it literally shrank, or it traveled away from me at a great speed. - MUFON

Welcome to Arcane Radio. This week, Sean, Lon & Butch will be discussing 'Horrifying Bigfoot Encounters'...as well as any 'Chicago Phantom' updates. Please join us on Wednesday, July 5th - 10PM ET / 7PM PT - go to www.arcaneradio.com and click 'Listen Live' to listen & chat. Call in 570-478-0902 - If you have a terrifying Bigfoot encounter to tell, please forward or call during the show.

Do Giraffes Get Struck by Lightning More Than Other Animals?

This newsletter is licensed under a Creative Commons Attribution-Noncommercial-No Derivative Works 3.0 United States License.
Hotlinking of PM Media images and copyrighted material is strictly forbidden unless permission is obtained.
'Phantoms and Monsters' and 'phantomsandmonsters.com' is protected under the Lanham (Trademark) Act (Title 15, Chapter 22 of the United States Code)
'Phantoms and Monsters' was establish in September 2005 as part of PM Media
Copyright 2005-2017 Phantoms and Monsters / PM Media - All Rights Reserved
Lon Strickler at 3:54 PM
Share
‹
›
Home
View web version