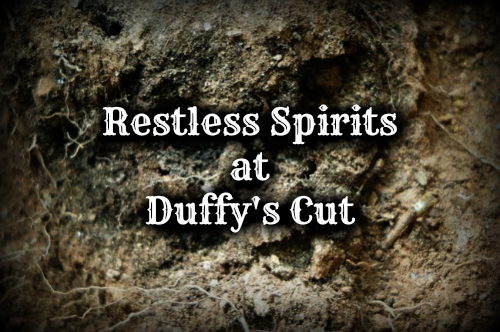 Hi John, Where I grew up, outside Phila, in our backyard, is a place we used to play, which is now called "Duffy's Cut". Back then, it was just a wooded area behind our house, but over the years, it has become somewhat of a legend. Just wondered if you have ever heard of it?


Hi Toni - it is indeed real - while building what would become the PRR an Irishman named Duffy hired immigrants 'off the boat' to help build a mile long cut thru the hills. Dozens of them died and it was said to be disease but rumors - and subsequent excavations - proved that many of them were murdered. There have been numerous reports of hauntings in the area; just put Duffys Cut in a browser and you'll see lots of stuff - there have been some good recent docus on it, and one of my fav bands, Dropkick Murphys (Irish Punk) did a song about it called 'The Hardest Mile'

When we were kids, my brother came home crying and saying there was bunch of ghosts up there dancing around a fire. He never went back there again. Now we find out there really were ghosts up there. We used to call it "Devils Canyon". I never knew where that name came from. There is a guy from our village assisting in the excavation. They found 7 bodies but I think they said there were around 54 people killed. It's amazing that we used to play up there. Really makes you wonder what is beneath the ground we walk on every day!


Wow - that is so fascinating about your brother! Without divulging names, can I share this with some of my paranormal colleagues? Hope to see you at the MHS reunion this fall!

Sure! Yeah, he came home crying! My parents thought he was nuts! Then, a few months ago, when we talked to a guy from the village who is involved in the dig, my brother said, "I told you!...he never forgot that and it happened 50 years ago!" 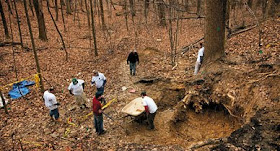 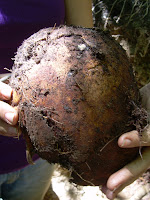 The following information was published in the Philadelphia Inquirer in 2010...it is no longer posted:

This past spring, the Chester County Paranormal Research Society asked for permission to investigate the valley at Duffy’s Cut. The Duffy’s Cut Project research team is deeply divided about the scientific validity of paranormal investigations—Frank Watson (along with John Ahtes, before his death) believes they are in conflict with his religious beliefs and status as a clergyman; Bill Watson remains agnostic about their validity; and Earl Schandelmeier prefers to keep an open mind about the known unknowns that lie beyond the purview of scientific fact—but after some debate they gave the go-ahead.

The CCPRS team brought with them an array of sophisticated ghost-busting equipment, including cameras equipped with motion sensors and night-vision capabilities, and several electromagnetic field meters. But the device that yielded the most startling results was something called a Frank’s Box, a device that scans the AM radio band and acts like a ouija board, purportedly enabling a two-way conversation between the living and the dead.

Duffy’s Cut Project team members Earl Schandelmeier and Robert Frank accompanied the investigators from CCPRS and both men agreed to ask questions out loud that only the 57 Irishmen could answer during sessions with the Frank’s Box. These attempts to communicate with the dead took place in three half-hour segments over the course of several hours. At first, there was not much response, but as the night wore on, things got interesting:

Question: Do you know Duffy?

Question: What about those homes up there?

Question: Are you with God?

Statement from the 'Duffy's Cut Project':

In June, 1832, a group of 57 Irish immigrants from Donegal, Tyrone, and Derry arrived in Philadelphia. They were brought to Chester County by a fellow Irishman named Philip Duffy as laborers for the construction of the Philadelphia and Columbia Railroad, Pennsylvania’s pioneering railroad. Within six weeks, all were dead of cholera and possibly violence, and were buried anonymously in a ditch outside of Malvern.

The Duffy’s Cut Project is an ongoing archival and archaeological search into their lives and deaths and seeks to provide insight into early 19th Century attitudes about industry, immigration, and disease in Pennsylvania. With the help of the Chester County Emerald Society, we obtained an official State Historical Marker for the site in March, 2004, thereby putting Duffy’s Cut on the map of history. The marker was dedicated on June 18, 2004, and was placed by us at the intersection of King Rd. and Sugartown Rd. in Malvern.

From August 2010 - irishcentral - The mystery of Duffy’s Cut, how 57 Irish immigrants died and were anonymously buried in the summer of 1832, could be coming to a close. Two new skulls unearthed show evidence of violence and possibly a bullet hole.

In the summer of 1832 a group of 57 Irish immigrants came to the area west of Philadelphia to work on the construction of the railway line. Within six weeks the men, mainly from Donegal, Tyrone and Derry, were all dead and anonymously buried in a mass grave outside the town of Malvern.

For some time it was thought that the mass grave was due to an outbreak of a dangerous disease such as cholera and this was simply a way of dealing with infection. However, the new evidence paints a different picture. While the two skulls found more recently show signs of violence and a bullet hole the previous skulls unearthed also showed trauma.

These grizzly finds confirm what the two leading historians on the archaeological dig feared. “This was much more than a cholera epidemic”, said William Watson.

Chairman of the history department at Immaculata University, William Watson and his twin brother, Frank, have been working on this archaeological mystery for almost a decade.

Since 2009 the Watson brothers have uncovered seven sets of remains. One of the victims has been identified, pending DNA tests.

For seven years before the brothers found nothing at the site and the hypothesized had been that the group of men had died of cholera. The disease was rampant at the time and the mortality rate was between 40 and 60 percent.

They theorized that some might have been killed by vigilantes due to the anti-Irish sentiment in the 19th century America, because of tensions between the poor transient workers and the affluent residents or an intense fear of cholera. It could have been a combination of all three.

Now that the Watson brothers have four skulls all with evidence of trauma they show that the men were struck in the head. Janet Monge, an anthropologist working on the site, says that at least one of the men was shot.

Monge said “I don't think we need to be so hesitant in coming to the conclusion now that violence was the cause of death and not cholera, although these men might have had cholera in addition."

“They do have indications on their skeletons that life was not a bowl of cherries,” said Monge who is the keeper of collections at the University of Pennsylvania Museum of Archaeology and Anthropology.

The bones show that the laborers were muscular despite having poor diets and their teeth show that they were not wealth enough to have afforded sugary sweets.

They also found coffin nails among the corpse’s bones which show that some of the bodies had received some kind of formal burial.

The Watsons discovered the mass grave through the personal papers of their late grandfather who had worked on the rails long after the 57 men were killed. The projects name comes from the name of the man who hired the group of Irish men, Philip Duffy, and the part of the railroad that the men were hired to build, the cut.

When the immigrants died, or were killed, in 1832, Duffy ordered the shantytown, where they had lived, to be burnt and their bodies buried in the railroad fill. The Watsons say the men’s families were never told of their deaths.

Four months before their deaths a passenger ship, the John Stamp, arrived from Ireland. The passenger list offers the possible identity of 15 workers from Donegal, Tyrone and Derry.

The Watsons believe that they have been able to identify 18-year-old John Ruddy as one of the bodies found. They compared his bone size to the ship’s manifest and also found a section of teeth with a rare genetic anomaly which they believe matched with an anomaly shared by some Ruddy family members in Ireland. The DNA results should be returned in six months.

The 47-year-old twins both have doctorates in history but have nothing more that introductory biology.

“It has been indeed a crash course…and it's been fascinating," said Frank.

Monge said "They're as professional a team as anyone I've seen out there on a site."

As well as being a way of documenting the early 19th century attitudes to industry, immigration and disease in Pennsylvania the brother’s ultimate goal is to find all of the men’s remains and property and inter them properly, either in the U.S. or Ireland.

We see this more as a recovery mission," William said. "Get them out of this ignominious burial place."

The Ghosts of Duffy's Cut: The Irish Who Died Building America's Most Dangerous Stretch of Railroad

Ghost Soldiers of Gettysburg: Searching for Spirits on America's Most Famous Battlefield