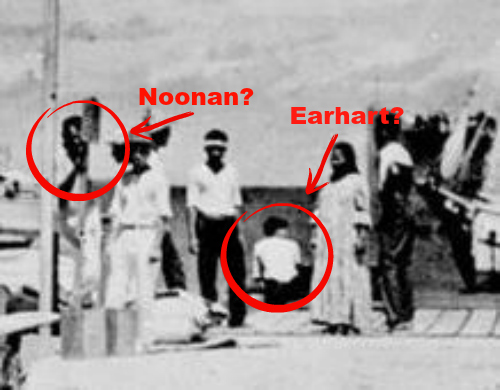 Was Amelia Earhart Imprisoned and Killed by the Japanese?

Buried in the National Archives for nearly 80 years, a newly rediscovered photo may hold the key to solving one of history’s all-time greatest mysteries.

On July 2, 1937, near the end of her pioneering flight around the world, Amelia Earhart vanished somewhere over the Pacific Ocean. Most experts, including the Smithsonian’s Air and Space Museum, believe Earhart likely ran out of fuel and crashed into the Pacific Ocean. But no trace of the aviator, navigator Fred Noonan or her twin-engine Lockheed Electra airplane were ever found, confounding historians and fueling conspiracy theories ever since. Now, new evidence has surfaced in U.S. government archives suggesting Earhart might not have crashed into the Pacific at all, but crash-landed in the Marshall Islands, was captured by the Japanese military and died while being held prisoner on the island of Saipan. Read more at Does This Photo Show Amelia Earhart After Her Plane Disappeared?

Hi Lon. My parents lived in an old farm house in a small town east of Lansing, Michigan. They rented the house from some friends of my dad's and they were told the wife's parents had lived there and both were gone. Soon after my parents moved in all the lids to my moms pots and pans had disappeared from the cupboard they were in. Mind you just my older parents lived there no one else. After looking every where for her lids my mom got upset and told my dad she was going the next day to buy new. Well when she walked in the door with her new lids there laying on the kitchen table was all her lids. Boy was she mad. We told the landlord what happened and all she said was sounds like Grandpa Henry...he loves a good joke.

A few months later my moms favorite earrings disappeared. She looked everywhere again. One day after she had made the bed she said out loud 'Grandpa Henry it is not funny give them back.' A few hours later she went back in the bedroom and there laying on her pillow was the earrings. She was pretty freaked out after that.

One time my dad, who was the chief of police for the town, came home for lunch and set his cruiser keys down in the kitchen. When got ready to leave he could not find them anywhere. My mom, my daughter and him looked all over the house and yard. Finally he announced he was radioing in for them to bring the other set of keys. My mom and daughter turned from the back door and there laying in the middle of the table was his keys. All three swear they looked there several times. These are just a few jokes Grandpa Henry pulled on us while they lived there. Thanks for taking the time to read our story. PS

[The following account came in from the United Kingdom, and the writer requested anonymity.]

I saw a shadow person. I’m not a paranormal type person. I’m a walker/hiker. One path I used to take led me past a crematorium (I didn’t know it was there for a long time). I was about 100 yards from the crematorium and saw it ahead of me on the path. It was too far away to be my shadow (I could see that, too). I hadn’t been walking in a while through commitments, and I got really angry that this thing would spoil my walk, and so I walked faster towards it. It looked straight at me and ran, went behind a bush and disappeared.

That was the first time I saw the Shadow Person in that area. The trail is unusually dour and I couldn’t find a natural reason for it. I noticed the feeling from the first time I walked down it. I wasn’t surprised when I saw the Shadow Person. There’s the crematorium at one end of the trail and a mental health unit at the other, and I know negative ‘‘entities’’ like messing with those people.

I used to wonder why I always got terrible luck after I walked that way and why hardly anyone else took that path. Now I know.

REG: What sort of bad luck happened to you, and how long did it last?

Anonymous: The bad luck would happen for between a week and a fortnight and would make me into a ‘‘white crow’’ for every moron that was in whatever area I was in. It was like someone had written ‘‘mess with me’’ in invisible ink on my forehead and only cretins could see it. People would take just about anything I said negatively in those times, too. It got quite ugly. There was a person with a personality disorder (I worked in mental health) who’d latched onto the peripherals of my social circle, and they sensed it straight away.

I don’t go there anymore! Take care and be careful if you’re actually going looking for these things.

REG: Shadow People are attracted to areas of depressed and low energy, such as might be found in burial places where people do a great deal of grieving. There is also the possibility of lingering earthbound soul energy. Even casual visitors, such as hikers, might feel a sadness as they enter the area, and thus contribute to the pooled energy. A mental health facility, where people suffer from various disorders including chronic depression, also can attract Shadow People.

Encounters with Shadow People are associated with runs of bad luck, as well as eruptions of poltergeist phenomena at home. This association also exists with related entities such as Men and Women in Black, Black-Eyed Kids and People, “dark” but unknown beings and creatures, and even some extraterrestrials. Does some of their negativity just rub off on witnesses – or is there a deliberate attempt to taint a person? Some individuals who encounter these entities have a feeling that the attempt to pollute is deliberate. This is especially the case with the Black-Eyed beings.

I have long regarded all these entities as forms taken by Djinn, the ultimate shape-shifters, and many of whom like to mess with people – just as Anonymous discovered about negative entities. - Crematorium Shadow Man and Bad Luck

UPDATE: 'HORRIFYING BIGFOOT ENCOUNTERS' - SATURDAY JULY 8TH - 10PM ET - LIVE!
Welcome to Arcane Radio. This week, Sean, Lon & Butch will be discussing 'Horrifying Bigfoot Encounters'...as well as any 'Chicago Phantom' updates. The original was postponed and re-scheduled for SATURDAY, JULY 8th - 10PM ET / 7PM PT - go to www.arcaneradio.com and click 'Listen Live' to listen & chat. Call in 570-478-0902 - If you have a terrifying Bigfoot encounter to tell, please forward or call during the show. 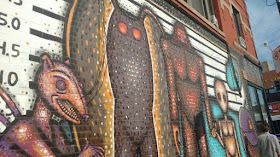 I have been told that this mural is on a wall only a few blocks from the last 'Chicago Phantom' sighting in Logan Square in Chicago.

A Contactee or a Victim of Mind-Control?


Cryptozoology A To Z: The Encyclopedia of Loch Monsters, Sasquatch, Chupacabras, and Other Authentic Mysteries of Nature

This newsletter is licensed under a Creative Commons Attribution-Noncommercial-No Derivative Works 3.0 United States License.
Hotlinking of PM Media images and copyrighted material is strictly forbidden unless permission is obtained.
'Phantoms and Monsters' and 'phantomsandmonsters.com' is protected under the Lanham (Trademark) Act (Title 15, Chapter 22 of the United States Code)
'Phantoms and Monsters' was establish in September 2005 as part of PM Media
Copyright 2005-2017 Phantoms and Monsters / PM Media - All Rights Reserved
Lon Strickler at 1:16 PM
Share
‹
›
Home
View web version