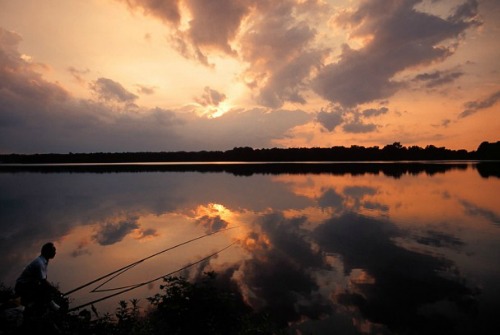 Cliff in Houston, Texas called in to tell of a UFO sighting he had in the early 1950s in New Jersey:

“When I was a kid. I'm 70 years of age. When I was about 10. 10 years of age. I lived in a very small town in New Jersey called Emerson. We had a reservoir next to it and you weren't allowed to go fishing there, but I always went fishing there. One night I went carp fishing which is real popular there. I got home a little bit late and I had forgot a bunch of my tackle so I went back to get it and when I went back to get it... this sounds like a big deal but it wasn't, my friend and I, a guy named Jimmy, we saw this UFO come out of the water. It came out of the water, but the unusual part was it did not disturb the water. It didn't make a ripple. There wasn't any bubbles. It wasn't anything and this thing was, probably, now remember, I'm a little kid, so I'm bad on size, I'd say it was probably 30 to 40 feet across. It came up and it left period. Amen. When it left, it blinked out. It just wasn't there anymore. So me and Jimmy looked at one other, "Did you see that? Yeah, wasn't that cool? Yeah." I was into that. I went home and I told my father. My father just looked at me and said, "I don't know what the hell you saw." That was the end of it. There was no verification process. There was no nothing to do about it. (Church asks him where it happened again). New Jersey. Emerson. Jersey. Bergen County. Right next to the Oradell Reservoir.

Well, the following day, four or five other people saw it but they saw it at a different time of day and they said it glowed blue and orange. When we saw it was just kind of, the glow, it wasn't a glow, it was just the moonlight reflecting off of it but it was as plain as day. It had no windows. It had no propulsion system. We just saw it come up out of the water and it's, like, holy crap, look at this and away it went. (Church asks if it looked like the standard silver metallic disk) Yes. It made no noise, no flashing lights, no nothing. When it left, it come out of the water and went up about 30 to 40 feet and, in a blink of an eye, it was gone. (Church asks what year) '54 or '55 somewhere around that time and bunch of other people saw it the following day. The sightings back then weren't really a big deal.”

NOTE: The Oradell Reservoir, as well as the nearby Wanaque Reservoir, has a history of UFO sightings. Lon 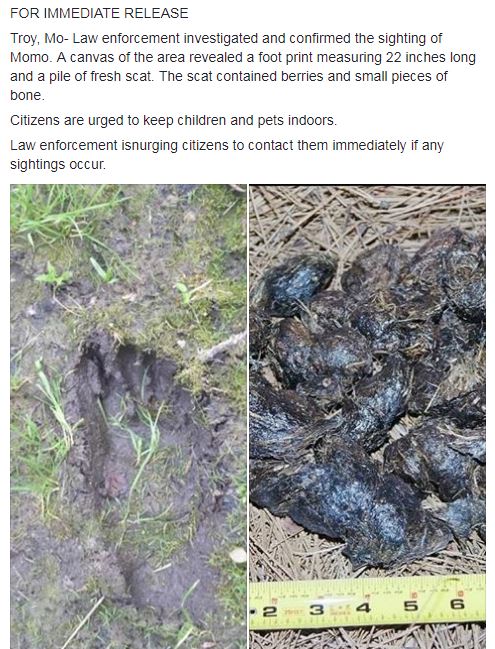 Well, it looks like Lincoln County, Missouri is also using Bigfoot (or Momo) in order to garner publicity 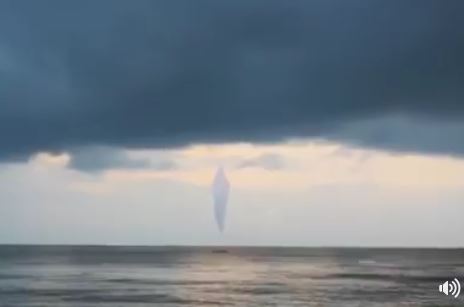 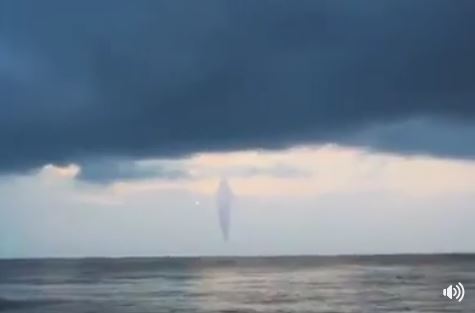 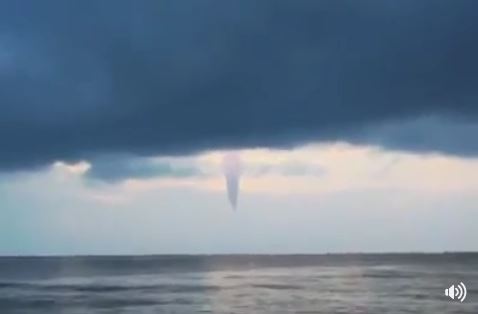 This anomaly was captured on video from a Jacksonville, FL beach. The anomaly was accompanied by a bright UFO also. Any clues?

On a foggy morning more than a week ago, Cary Shuker’s cat raced inside his Riverside home, terrified of something outside.

“This thing was standing out there, looking at me” said Shuker, a private contractor who lives at the base of Box Springs Mountain, which divides Moreno Valley and Riverside. “It was the ugliest looking thing.”

Shuker said the hairless creature, glaring at him about 80 or 90 feet away, had a tail like a rat or a possum, with rippled pinkish skin, teeth jutting both up and down out of its jaws and was “at least two feet or more longer than the biggest coyote you’ve ever seen.”

The creature turned and snarled at him, before stalking off. Before it vanished, it turned back toward Shuker, snarling and chattering one more time.

“It was cussing me out, basically. ... I stole its breakfast. It was hunting my cat,” Shuker said. “This wasn’t no coyote, by any means.” Read more at Residents say chupacabra stalks mountains of Riverside County


This will be the only blog post today. I'm following-up on leads...and the phone as been ringing all day. Thanks for reading. Lon
**********

“This Thing Was Definitely Not Human”

Mysterious Devil’s Footprints Around the World

This newsletter is licensed under a Creative Commons Attribution-Noncommercial-No Derivative Works 3.0 United States License.
Hotlinking of PM Media images and copyrighted material is strictly forbidden unless permission is obtained.
'Phantoms and Monsters' and 'phantomsandmonsters.com' is protected under the Lanham (Trademark) Act (Title 15, Chapter 22 of the United States Code)
'Phantoms and Monsters' was establish in September 2005 as part of PM Media
Copyright 2005-2017 Phantoms and Monsters / PM Media - All Rights Reserved
Lon Strickler at 4:40 PM
Share
‹
›
Home
View web version