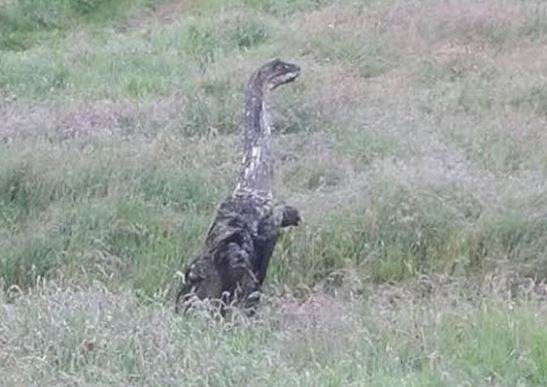 People in the west Stirlingshire village of Killearn in Scotland could be giving Loch Ness a run for its money.

These days such things cause ripples on social media.

Jimmy told the Observer: “I put it on Facebook - but I was taken aback at just how much response it received. It definitely has people talking.”

People have already likened it to part tortoise, part stoat and various other creatures.

“When I came towards it,” said Jimmy, who retired as an NHS general manager for mental health services in Glasgow in 2006, “I was struck by how prolific it was and took a picture. I thought it looked like a dinosaur. I have been up that way before but the sight was definitely unexpected. I put it on the Killearn For All Facebook page and the comments began.

“One resident, Mary Young, suggested we try to get someone to name it so I agreed to donate £100 to the charity of choice of the person who comes up with the name with the most ‘likes’.

“My cousin from Canada - who happens to be an ophthalmic optician - even commented three times.

“There have been lots of suggestions and Nessie Dorma seems to be ahead at the moment but more are coming in.

“At the end of the day if it gets people talking and gives everyone a bit of escape from all the bad news there seems to be at the moment then it’s all good. If it brightens up someone’s day and makes some money for charity all the better.” - Residents in Stirlingshire village react to sighting of mystery 'creature' in field

USO Sighting on the Detroit River

I was so relieved to stumbled upon your website....

I had a sighting, with 3 other acquaintances, aproximately 17 years ago, and it has haunted me ever since. Reading your story today, made me realize, I'm not crazy, there truly IS something under there.

Myself and 3 others, were swimming and boating by Boblo Island, on a hot July evening. My friend, Hugh, jumped off the boat and was swimming around. Myself and his 2 friends, I apologize I do not remember their names, it was a one time gathering, started yelling at him to get on the boat, something was in the water. As he looked up to us and questioned what we were saying, a large oval shaped, submerged vehicle, passed beneathe him. It had a whiteish hue to it. He got on the boat, we asked him if he felt anything, any disturbance, he said "no". Myself and the other 2 witnesses, put it out of our minds.....although, I have never been able to do that completely. I still wonder, but reading of other sightings and activity, made me feel like I wasn't crazy....I really believe something is going on....Thank you, I appreciate it! G 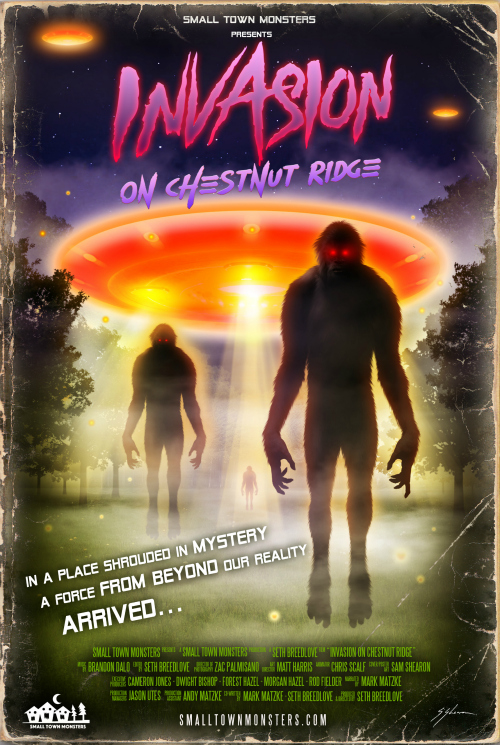 PENNSYLVANIA PREPARES FOR AN “INVASION”

A new film titled Invasion on Chestnut Ridge (from the creators of the just-released documentary, The Mothman of Point Pleasant) now has a trailer. “Invasion” tells the true story of one of the more bizarre places in America, Pennsylvania's Chestnut Ridge, and the unusual activity that has taken place there for decades. Ahead of the launch of the film, the official trailer has been released. Delving into one of the most intriguing, and unusual regions this side of the Bermuda Triangle, the film will tell the tale of the Kecksburg UFO crash, the Uniontown Bigfoot/UFO sightings, encounters with a large, prehistoric bird in Keystone State Park and much more.

The trailer shows glimpses of just a few of the interviews conducted with locals, witnesses and investigators interspersed with footage depicting some of the unusual activity that has taken place along the ridge. Invasion on Chestnut Ridge will be the first feature film to document this hotbed of paranormal activity. Is the ridge a magnet for strange and mystifying forces? A beacon to visitors from beyond? You be the judge when the film is released on October 20th!

Small Town Monsters produced the just-released Mothman of Point Pleasant. That film is currently in the midst of a lengthy film festival run that spans into next year, and was previously the best selling title on Amazon’s Documentary category. Invasion is directed and produced by Seth Breedlove, the award-winning director of Boggy Creek Monster, Beast of Whitehall and The Mothman of Point Pleasant. It features cinematography by Zac Palmisano, animated sequences by Chris Scalf, special FX work by Sentry Cinemas, illustrations by Brandon Scalf and Matt Harris and an original score by Brandon Dalo. The one-sheet was created by renowned artist, Sam Shearon.

Are All “Anomalous Apes” Paranormal?

Drinking coffee could lead to a longer life, scientist says

10 Truth Bombs to Drop at your Next Dinner Party


Underwater & Underground Bases: Surprising Facts the Government Does Not Want You to Know

UNDERGROUND BASES & TUNNELS: What is the Government Trying to Hide?

This newsletter is licensed under a Creative Commons Attribution-Noncommercial-No Derivative Works 3.0 United States License.
Hotlinking of PM Media images and copyrighted material is strictly forbidden unless permission is obtained.
'Phantoms and Monsters' and 'phantomsandmonsters.com' is protected under the Lanham (Trademark) Act (Title 15, Chapter 22 of the United States Code)
'Phantoms and Monsters' was establish in September 2005 as part of PM Media
Copyright 2005-2017 Phantoms and Monsters / PM Media - All Rights Reserved
Lon Strickler at 12:44 PM
Share
‹
›
Home
View web version