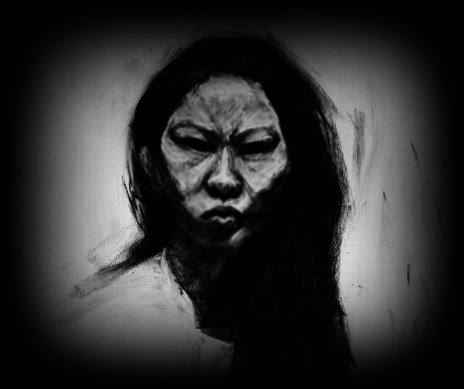 'I suppose I’ll just have to kill you'

Several years ago I was working in a center for adult education. A woman from the business office, of Asian origin, came to my classroom to collect a past due tuition payment from a student. The student was quite tall and stood over the woman. When she asked for the payment, the student jokingly said, “What if I don't pay?” She slowly looked up at him and when her eyes met his, they changed to jet black! She said, “I suppose I’ll just have to kill you." It felt as though the temperature in the room dropped 20 degrees and everyone there became very scared.

The student was so upset that he begged her hold off until he got the money. At that point her eyes returned to normal and she told him it would be fine and that he could pay her the next day...but not to forget. All of us were so adversely affected that I needed to dismiss the class early.

Later on, when I told the principal of the center about it, he got a worried look on his face and told me to forget about it. And, by no means, mention any of this to anyone. He acted as if she was a demon or malevolent being. I never said a word to anybody else.

A few years later, after I had left the position, I found out that the woman had died under strange circumstances while visiting her native country. MM

Woodbury, MN: On 6/23/17 I woke up and found that my underwear was on inside out and backward with mud on it. There was a needle mark in my right arm where one would get an IV. There was a somewhat circular mark on the wall that glows under black light. The glowing mark is approximately 2x3 inches.

On 6/11/17 I woke up in the early morning and it was still dark outside. I felt a very strong beam of pressure holding me down on my bed. I was scared and started to struggle to get away from the pressure. I kept trying to stand up but was prevented from movement. A telepathic method entered my brain that said "the pressure is on your pelvic bone to hold you down so you don't fall out of bed". When I awoke in the morning there were black and blue marks on my abdomen. There was an 18 in black mark on the wall near my bed and the source was unknown. There was bruising on my left leg between my knee and ankle.

i have a recent history of ongoing milab and alien abductions. - MUFON

CAPE LOOKOUT, NC - A Great White shark nearly as long as a car and weighing more than 1,000 pounds was spotted off the North Carolina coast this weekend.

Hilton, the 12.5 foot, 1,326 pound mature male Great White shark, was spotted just off Cape Lookout on Saturday, according to the OCEARCH research group tracker. For comparison, the average Toyota Camry or Honda Civic are about 15 feet long.

Hilton has been tracked near North and South Carolina dozens of times since he was tagged by OCEARCH on March 3.

Within 72 hours, Hilton had traveled more than 224 miles up the North Carolina coast from South Carolina.

Hilton was named for Hilton Head, S.C., where he was caught and tagged.

Blood from young animals can revitalise old ones

Why We Need a New Type of SETI Instrument

Mythic Creatures: And the Impossibly Real Animals Who Inspired Them (American Museum of Natural History)