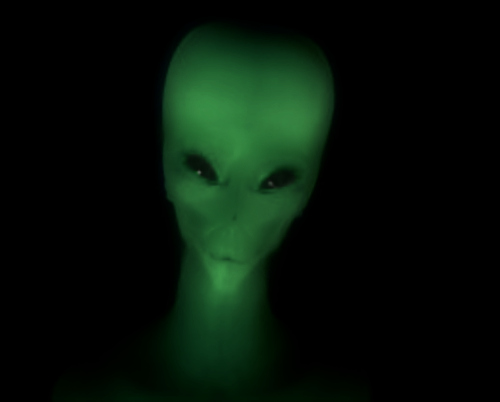 Simi Valley, CA - 2017-07-02: I was just watching a movie in my living room around 12 am when I suddenly heard my dog growling at something in our backyard for a few mins. He was watching something outside from inside our living room. So i decided to let him outside and went with him, to discover this strange trail of green goo outside everywhere in our backyard. I decided to take pictures and document because it was weird. As I put the flash on my phone and took pictures, I heard something rumbling through the grass and debris on our hill of our backyard and a weird noise, that I haven't heard before, sounded like humming, pulsating and almost electronic sound coming from the hill. I went inside shortly after, then became curious and went back outside to document more but my phone was dying so I couldn't take a picture without flash anymore. I got freaked out a little because I heard even more noises and felt like I was being watched. Strange, because I will never know what the heck that was. All I could kinda see was something slightly glowing with eyes. - MUFON (Note: no photos were attached)

Frank in Hollywood, Maryland called in to tell of his UFO sighting:

“Two nights ago (June 28, 2017)... I live down here in Southern Maryland near Patuxent Naval Air Station. This was about 20 miles from there. I was on my way home and what I saw in the sky. I had never seen a UFO before, never seen a ghost before, never been bothered by a demon or anything like that. I'm 69 years old. Never saw it. Okay, so two nights ago I saw something in the sky that, it was so magnificent, it was gold as, you know, the color gold? This entire craft was gold. I said, "Well. Does a helicopter have his lights on?" It wasn't moving fast in the night sky and I just stopped the car in the road because I had no shoulder to drive on and I stood there and looked at it and it was... the magnificence of it. It just, it, I just was stunned for a few minutes, and I wasn't afraid of anything. I don't think it was the UFO, but what else could it be? I stood for, I would say, a good 20 minutes. It was moving slow then it seemed to have a wheel on the back of it. I said, We don't have any helicopters like that. But the magnificence of this gold. I would say, well, maybe the pilot had the lights on but the whole craft was lit up. It was the most beautiful gold that I had ever seen and I don't know what to make of it.” 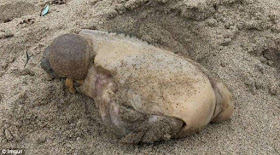 A mysterious sea creature (pictured) has baffled internet users after it washed up on a Californian beach. The slimy monster had no discernible features such as eyes or a mouth, and sported two huge lumps sticking out of one end of its body.

The creature washed ashore at Leo Carrillo Beach in Malibu, California. It weighed around 3.2 kilograms (7 lbs) and was 13 centimetres (5 inches) wide. Person who found it shared pictures of it online to find out what it was. One user suggested it was a 'long-dead' California sea hare, a common species of sea slug 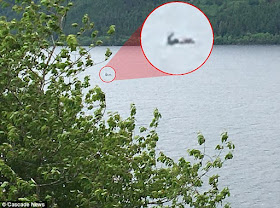 Holidaymakers on the trip of lifetime have taken a mysterious photograph of a fast-moving large object - leading to claims that it could be the Loch Ness Monster.

Peter Jackson and Phillippa Wearne, of Sydney, Australia, were driving alongside Loch Ness in the Highlands when they saw something big gliding through the water.

Retired engineer Mr Jackson, 64, and former lawyer Ms Weare, 60, said they were stunned by what was only the second claimed sighting of the monster this year.

Ms Wearne said: 'I really was just stunned and I thought, "what is it?" It was pretty big even from 150 yards or more offshore. I didn't know what to think.

'We took photos and showed them to people at a B&B and (then) on a cruise. Skipper for the Loch Ness Project, Ali Matheson, said he had not seen anything like it. Read more at Is this proof the Loch Ness Monster exists? Holidaymakers take mystery snap of fast-moving large object in the water

A Deadly Brain-Invading Worm Is Disturbingly Widespread in Florida

The Book of Mothman

Living Among Sasquatch: A Primer

This newsletter is licensed under a Creative Commons Attribution-Noncommercial-No Derivative Works 3.0 United States License.
Hotlinking of PM Media images and copyrighted material is strictly forbidden unless permission is obtained.
'Phantoms and Monsters' and 'phantomsandmonsters.com' is protected under the Lanham (Trademark) Act (Title 15, Chapter 22 of the United States Code)
'Phantoms and Monsters' was establish in September 2005 as part of PM Media
Copyright 2005-2017 Phantoms and Monsters / PM Media - All Rights Reserved
Lon Strickler at 2:44 PM
Share
‹
›
Home
View web version