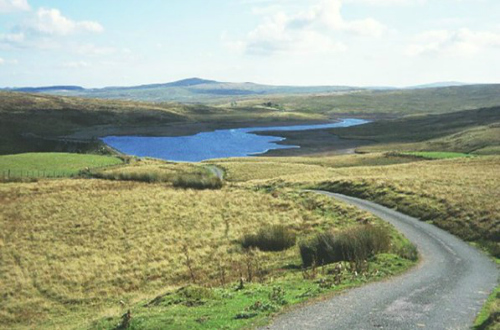 I received the following information from my friend and colleague David Garrison at UFO Openline Friends:

Witness to "North Wales, Denbigh Moors UFO Incident". Here's what he saw, in his own words:

"Not a great deal to say except the story is verifiable as happened. It's the North Wales, Denbigh Moors Incident. I was ten at the time, lived in a village called Meliden, next to town of Prestatyn. This is MY OWN sighting of the Denbigh Moors Incident I didn't even know had happened. Village under flight path of Vulcan B1 Nuclear Bombers. Hear the mighty roar of engines, ran to front window. Instead of seeing B1 bomber pass over on an exercise as they did in the 70's, I saw a large brown orb structure floating in the air, assisted/escorted by two smaller black orb structures. There was an enormous engine roaring sound. The brown orb appeared to be dipping towards the ground, recovered some height to move back up towards the black or darker coloured orbs, then moved off over towards the Irish Sea, passing over farmland, and the more populated coastal strip towards the Frith Beach, Prestatyn. I DID NOT EXPECT TO SEE A UFO. WE REGULARLY HAD VULCAN B1 BOMBERS FLYING VERY LOW OVER OUR PART OF THEIR AVOIDING RADAR SCENARIO. WAS VERY SHOCKED INDEED. :)"

UFO sightings in North Wales over the years

Queens Village, NY - 2012-10-12: Before all of this happened, my friend talked about "slender man". For a few days, I continued to have panic attacks thinking about it. Couple days later my mother asked me to buy a groceries, and to take out money from the bank. I went to a store which was across the street from the bank and brought the items, and I noticed there was a tall slender male, in a really nice black suit with a hat. His skin was pale, his facial features I cannot remember, he was staring at me as well; thought to myself "that's really weird" and was a bit nervous. I crossed the street and entered the bank, continued to think about that weird man, and went to see if he was still by the store while I took money out from the ATM. To my surprise, he was in front of the door by the side of the bank outside. That's when I became terrified, and told myself "if he comes to me or does anything, I'm knocking his flipping head off," implying I would punch him as hard as I could and keep hitting him. When I got the money and turned back around to see, he was gone. From that day forward, I have not had a panic attack of "slender man". - MUFON

A mystery woman has been heard shouting through people’s letterboxes in the middle of the night, prompting concern and confusion in a Merseyside town.

Residents in Kirkby, a few miles north of Liverpool, suspect the bizarre wailing is part of a ploy burgle people's homes.

They reportedly fear that if they answer the door, someone will "barge in" and rob them.

Reports suggest a spate of incidents took place between 2am and 5am and involved a woman asking to come in and shouting that she has “nowhere to go”. Read more at Mystery over woman 'crying through people's letterboxes in early hours of morning'

£100 million worth of Nazi gold may lie in a German ship's watery grave.

British treasure hunters are now hoping to recover the mysterious chest, which was discovered by Advanced Marine Services, a UK-based firm.

The chest was found inside the post room of the SS Minden at the bottom of the Atlantic Ocean off Iceland, according to the Mirror.

It is hoped the cargo ship was transporting gold from South American banks to Nazi-ruled Europe when it sank in September 1939.

The ship was intercepted by the Royal Navy's HMS Calypso.

It was reportedly scuttled by its own crew so the vessel couldn't be captured by Allied Forces just weeks after the start of World War II.

It was claimed that the chest contains up to four tons of metal, and the British firm is now applying to Iceland's government for a permit to cut a hole in the ship's hull and remove the box.

The crew of the Sea­bed Constructor was previously stopped by Iceland's Coast Guard in April for not having permits to conduct research in the country's waters.

Advanced Marine Services want to bring the chest back to Britain, claiming the contents belong to the finder, the Sun reported.

The company is awaiting a decision from Icelandic officials on who owns the wreck and its contents.

The SS Minden left Brazil on September 6, 1939 - five days after the war broke out - and there were claims that officials from Banco Germanico, a subsidiary of German Dresdner bank, helped load its cargo.

The ship was sunk by its crew nearly three weeks later on September 24.

The crew was rescued by the HMS Dunedin and taken to a British naval base. - Chest which may contain 'Nazi gold worth £100m' found on sunken ship

We Could Resurrect the Woolly Mammoth. Here's How.

The Secret History of Twin Peaks: A Novel

This newsletter is licensed under a Creative Commons Attribution-Noncommercial-No Derivative Works 3.0 United States License.
Hotlinking of PM Media images and copyrighted material is strictly forbidden unless permission is obtained.
'Phantoms and Monsters' and 'phantomsandmonsters.com' is protected under the Lanham (Trademark) Act (Title 15, Chapter 22 of the United States Code)
'Phantoms and Monsters' was establish in September 2005 as part of PM Media
Copyright 2005-2017 Phantoms and Monsters / PM Media - All Rights Reserved
Lon Strickler at 3:07 PM
Share
‹
›
Home
View web version