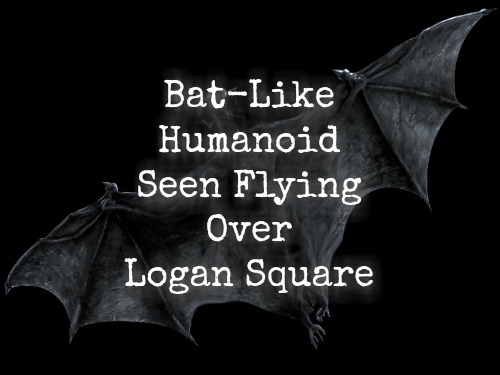 I recently received an email from a witness in Chicago, who stated that they wished to talk to me about a sighting he had on Friday June 30th at approximately 10:30 PM. The witness works security at a bar named 'The Owl' located in the 2500 block of N. Milwaukee Ave in Logan Square.

The witness states that he was outside the location, leaning against the wall while smoking a cigarette. He was alone at the time, except a few other people walking along the street. He noticed a large 'bat-like' creature flying above the street lights (approx. 60-70 ft away) over the lot across the street (in the photo below, you can see a building, which has been razed since). As the witness focused on the flying anomaly, he noticed that it was actually a bat-like humanoid. The body was 5 to 5 1/2 ft. in length and grayish in color (it was well-illuminated by the street lights). The head was human-like, but was much thinner and had a pointed crest extending from the back of it's head (similar to a pterosaur, but shorter). The head was turned away from the witness, so he could not see the eyes or face. The body tapered towards the back and it looked like there were short legs or appendages tucked underneath it, followed by a short rounded extension or tail. The wings had a full span of approximately 8-10 ft. and were attached along the body. The wings were a bat-like membrane, but heavy like that of a pterosaur. The witness noticed that the being flapped its wings to gain speed and height, then would glide. There was no sound. It was moving swiftly above the street lights across N. Milwaukee Ave., then burst upwards into the clouds. He was not sure if there were other witnesses, since the being flew by quickly. 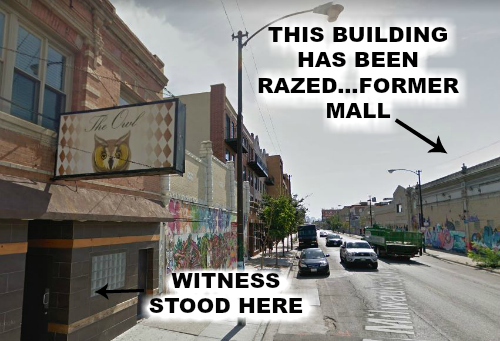 The witness said that at the time, his phone was inside the bar charging...and that he very upset he didn't have it because he would have had time to get a possible photo. He said that he didn't feel any fear or foreboding, only that he was startled at what he witnessed. The witness was very convincing, forthright and did not embellish during his account.

NOTE: This sighting was somewhat similar in description to the Lincoln Park encounters. As I stated previously, those witnesses who we have talked to (myself and Manuel Navarette) have been very forthright...which isn't the case with many other unknown creature experiencers. After talking to this witness, I'm starting to sense that this being is attempting to communicate to a wider audience without exposing itself excessively. This is the first time I have begun to get that sensation. What are we dealing with? This sighting has been added to the Chicago Phantom / Owlman / Mothman / Man-Bat / Flying Humanoid Reports - Chicago Metro Area - Interactive Map 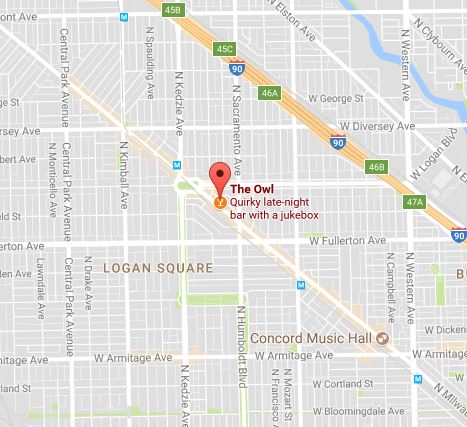 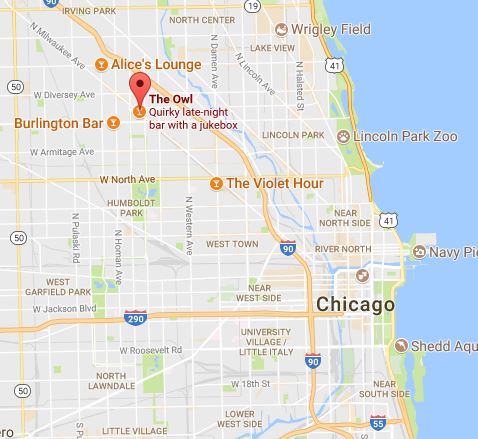 Have you had a sighting of a flying humanoid or huge bat-like creature in the Chicago, Illinois metro area or nearby? The entity has also been referred to as the 'Chicago Phantom', 'Chicago Mothman', 'Chicago Owlman' & 'Chicago Man-Bat.' Please feel free to contact me at lonstrickler@phantomsandmonsters.com - your anonymity is guaranteed. Our investigative group is conducting a serious examination of his phenomenon. We are merely seeking the truth and wish to determine what eyewitnesses have been encountering. Your cooperation is truly appreciated. You can call me directly at 410-241-5974 as well. Thanks...Lon Strickler #ChicagoPhantom
Encounters with Flying Humanoids: Mothman, Manbirds, Gargoyles & Other Winged Beasts