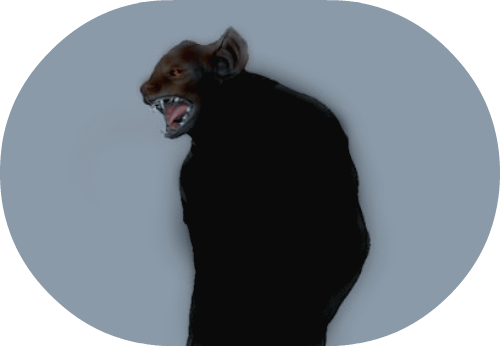 My friends and I went to Mexico for a holiday. We rented out a bungalow with some woods and stuff at the back. They went out to get more beer and just some shopping and I was left behind to have a shower. After yelling that they were gonna double lock the door - they leave. The shop was about a 15 minute walk away and I was literally just going to wash my hair, make a tea and watch some TV until they get back.

About 5 minutes went by and I heard a knock on the front door...weird as my friends have keys to this apartment. I just guessed that they were too lazy to use the keys and forgot something. I literally got out of the shower with bubbles in my hair and was walking towards the door with a towel just wrapped around me.

The door had a panel of textured glass in the middle and I could see this massive entity standing there. My friends and I are quite small and the guys have blonde hair. This thing looked big and black and was very tall.

Whatever it was it's tapping on the door and I'm standing in the entrance to the kitchen just peeking round the corner. I don't want it to see me and I slowly crouch down and crawl to the sofa. It's still tapping.

After what seemed like ages it just walks off and the textured glass is just back to normal. With nothing the other side.

My friends come back and Jake just quickly opened the door and goes "Oh my god Amanda!! We were walking back and we turned the road where the room is right? And we see this massive thing. It looked like a hyena ...that's all I can describe it as but only it was walking on TWO legs"

Phew at least someone else saw it.

He's still going on "yeah and as we saw it, it started making a weird yelling/growling noise. I swear to you Amanda, it walked off on those 2 legs and into the forest" - Annabannana00 - Reddit.com 2014

When I lived in Florida, a neighbor came to our door late at night. My dad was wary about opening the door but the man was so distraught we thought he was in an accident. He was getting off work, started his car, turned on his lights and looked thru his windshield. A HUGE CAT was dancing on his hind legs on the hood of his car. It was screaming and looking at him with glowing red eyes. Talking to us he calmed down a bit. I said it could have been a Siamese cat, they sound eerie and the red eyes could have been reflecting the headlights. He went home but later told us he had nightmares. That creature looked demonic. The cat also urinated all over the hood of the car and ruined his paint job. He still does not like cats. - Cassie

Josh in Texas called in to tell his UFO story:

“I may just tell a quick story about a UFO. I used to be a wind turbine technician and I was on my way home and when I was passing by a wind farm that was about 30 minutes away from my home. I noticed that it looked like there was something metallic hanging in the air next to a turbine. Now working in turbines, I've seen them swap out parts. I know for a fact they weren't swapping out anything massive in there, that might have been shiny because I know you need a crane just as big, as the turbine is actually quite bigger than the turbine would be and it's highly visible. I don't know what it was but I was driving 75 miles an hour on the highway and I couldn't pull over because there was no shoulders to look at this. I come across a tree line and, eventually, as I crossed the tree line, you know, I'm past it. I see that there is nothing next to the towers anymore. It was gone! That fast. It was just gone. It took maybe about 10 to 15 seconds to clear that and I know for a fact that in that time they could not fly in any parts into a turbine because it takes quite a while and a lot of precision work.”

There’s a poltergeist in the milking shed

Nanny sought for 'haunted' house in the Scottish Borders

A Violent Street Gang, Demons, and the Supernatural


Raven Rock: The Story of the U.S. Government's Secret Plan to Save Itself--While the Rest of Us Die

Unearthing the Lost World of the Cloudeaters: Compelling Evidence of the Incursion of Giants, Their Extraordinary Technology, and Imminent Return

The Genesis 6 Conspiracy: How Secret Societies and the Descendants of Giants Plan to Enslave Humankind

This newsletter is licensed under a Creative Commons Attribution-Noncommercial-No Derivative Works 3.0 United States License.
Hotlinking of PM Media images and copyrighted material is strictly forbidden unless permission is obtained.
'Phantoms and Monsters' and 'phantomsandmonsters.com' is protected under the Lanham (Trademark) Act (Title 15, Chapter 22 of the United States Code)
'Phantoms and Monsters' was establish in September 2005 as part of PM Media
Copyright 2005-2017 Phantoms and Monsters / PM Media - All Rights Reserved
Lon Strickler at 12:27 PM
Share
‹
›
Home
View web version