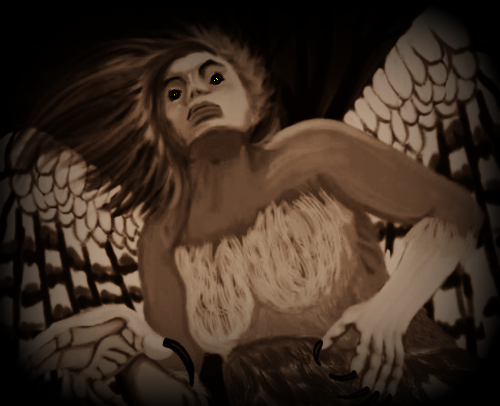 Night of the Lechuza

“This incident occurred in Ozona, Texas. I had been on the phone with my ex, but I had fallen asleep. Then I suddenly woke up because I could hear my ex saying "Baby please, don’t do this." I guess I broke up with him while I was sleep-talking to him. Anyway he was telling me I was saying ugly things to him. In the middle of our conversation I see this shadow that stops at my window. First thing that runs through my mind is a Lechuza. I tell my ex not to hang up, but not to say anything. I'm scared. And I don’t explain anything to him. Then all of a sudden the shadow disappears. I then start telling my ex what happened, when from the ceiling of my room I hear this horrible laugh and scratching. Then I try to yell and nothing comes out...I am frozen scared. I try to yell, I try to get up, but I cant. Some how I finally jump off my bed and run across to where my cousin and her daughters are asleep. I try to wake up my cousin so I touch her and she opens her eyes. I said "there's a Lechuza." But she didn’t understand me. She said "what?" pretty loud. The girls woke up and right then its right above my cousin's room. The girls start to cry. I'm starting to freak the heck out. We don't know what to do. My cousin and I decide to call the cops and tell them that we saw someone looking in the window. I mean what would they think if we said, "We need an officer to rid us of this Lechuza?" Anyway, we call them and I swear the scratching, laughing and thuds are loud and getting louder. We wait and literally seconds before we see the spot light from the cops outside, it stops. The cop comes...and goes. About ten minutes after he leaves it comes back. We run to the car and decide to leave. That was the last day I lived with my cousin.

Rothesay, NB, Canada - 2017-06-10: The event occurred roughly 11:30 at night. I heard some noise outside of my girlfriend's home and so I went outside to investigate it and make sure that raccoons weren't in the garbage. I walked towards the garage beside the house when I heard some twigs breaking under footfalls just inside the tree line. I turned on my flashlight and started slowly moving towards the noises and heard them stop. I walked a bit farther in, where there is a small game trail and seen what looked to be an alien "grey" crouched down poking at some bushes. It immediately turned around when I shone the flashlight on it (mostly due to my shocked shout) and it ran off. I went back inside and witnessed it walk across the back yard towards the side of the house, through the front lawn and out across the street to the next tree line. I decided to see if it was still there, and approached it again after discovering it crouched in the trees once again. I moved slowly and tried to do my best to show that I was not aggressive or armed, and it just watched me with a really spooky glare. It was roughly 3-4 feet tall, had large black eyes, skinny but muscular arms and legs, no nose or facial features and had a large head. I was also able to count it's fingers and seen it had three fingers and a thumb. it made no noise at all. I was roughly ten feet away from the alien before it got up and walked away, and I did not follow again as I was afraid it felt threatened and might attack me. - MUFON

Welcome to Arcane Radio. This week, Sean, Lon & Butch will be discussing ongoing investigations...including any updates on the 'Chicago Phantom.' This should be a great show! Join us on Wednesday, June 14th - 10PM ET / 7PM PT - go to www.arcaneradio.com and click 'Listen Live' to listen & chat. Call in 570-478-0902

Could Aliens Be Hibernating Through The Worst Time in The Universe?

We Have No Idea: A Guide to the Unknown Universe

Eastern Body, Western Mind: Psychology and the Chakra System As a Path to the Self

This newsletter is licensed under a Creative Commons Attribution-Noncommercial-No Derivative Works 3.0 United States License.
Hotlinking of PM Media images and copyrighted material is strictly forbidden unless permission is obtained.
'Phantoms and Monsters' and 'phantomsandmonsters.com' is protected under the Lanham (Trademark) Act (Title 15, Chapter 22 of the United States Code)
'Phantoms and Monsters' was establish in September 2005 as part of PM Media
Copyright 2005-2017 Phantoms and Monsters / PM Media - All Rights Reserved
Lon Strickler at 2:43 PM
Share
‹
›
Home
View web version