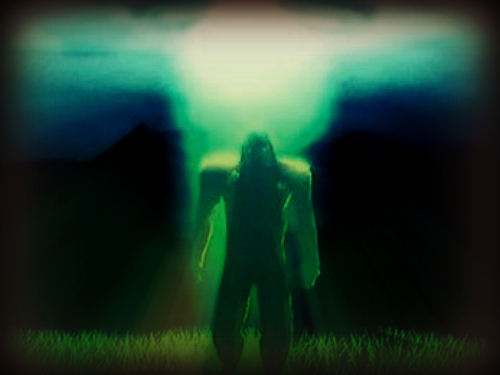 “In 2009 I was in Algonquin Provincial Park (Ontario) fishing and saw a Sasquatch walking into the woods along the riverbank and with him, there was an alien being about 5 foot tall holding the Sasquatch's hand. It looked like the alien was trying to help the Sasquatch travel over rough rocks and through the swampy bullrushes. But crazier than that was that the alien was clothed in a pure white long gown. I watched as they kept looking over their shoulder not looking at me but at something behind me. Then I looked behind me and saw a dim blue light about 100 feet away deeper in the woods. I thought well if they are going away from me I'm probably safe. A weirdness soon hit me as I believed the alien was not walking but floating over the harsh surroundings.”

Moab, Utah - 2009-07-09: Hiking down the east side of Mount Peale I encountered an entity that had two tall elk like legs that crossed my path. Two legs that is all I saw. I was hiking alone with my crew behind me a ways when these giant legs crossed my path. The only sound I remember was the sound of me trouncing down the mountain. I remember looking to follow these legs and being blinded by the sun expecting to see a full elk towering above me I was left very confused... I spun around expecting to see the animal running away when there was no animal or trace to be seen. I was stunned and took a few moments to re-evaluate what I saw and if I could have mistaken something for these legs. There was no such thing. ...

I'm reporting this now because I had found out about MUFON last month in an article about a man in Ohio or Pennsylvania that saw two large grey legs along a path. This sounded like quite a similar experience. Two tall legs and that's it. People mentioned a lot of "activity" around the area but know one said anything about this kind of thing.

This week we welcome paranormal investigator Dave Spinks to Arcane Radio. Dave has been researching and investigating the paranormal since 1986 in various aspects, due to several experiences he had as a young man. He retired from over a 20 year career in the U.S. Military and Federal Law Enforcement in 2011. Since that time he has investigated the paranormal on a full time basis and has conducted several hundred investigations during his time researching the supernatural. He has investigated some of the most notoriously haunted locations in the United States and even a few in Europe. He has also Investigated numerous private residences and has witnessed some of the most hair raising and unnerving things one can imagine while investigating the paranormal. Dave is the founder of Society of the Supernatural (SOS), teamed with paranormal researcher & colleague David Weatherly. We will also be joined by Bill B., a recent eyewitness of the Chicago flying anomaly ('Chicago Mothman or Owlman'). This should be a very interesting show! Join us on Wednesday, June 7th - 10PM ET / 7PM PT - go to www.arcaneradio.com and click 'Listen Live' or go directly to http://www.spreaker.com/user/forkermedia - Call in 570-478-0902

'They were hauling a big creature': New footage reveals what Deputy Sheriff said he saw at Roswell, in UFO mystery that has baffled experts and conspiracy theorists for 70 years

Is this the ghost of a doctor who killed himself? Chilling footage from inside a 'haunted' hospital shows a spooky figure stalking a corridor


Lightworker Relationships: Creating Lasting and Healthy Bonds as an Empath

Cut Cords of Attachment: Heal Yourself and Others with Energy Spirituality (Energy HEALING Skills for the Age of Awakening )

Freeing the Captives: The Emerging Therapy of Treating Spirit Attachment

Haunted By The Things You Love

This newsletter is licensed under a Creative Commons Attribution-Noncommercial-No Derivative Works 3.0 United States License.
Hotlinking of PM Media images and copyrighted material is strictly forbidden unless permission is obtained.
'Phantoms and Monsters' and 'phantomsandmonsters.com' is protected under the Lanham (Trademark) Act (Title 15, Chapter 22 of the United States Code)
'Phantoms and Monsters' was establish in September 2005 as part of PM Media
Copyright 2005-2017 Phantoms and Monsters / PM Media - All Rights Reserved
Lon Strickler at 2:01 PM
Share
‹
›
Home
View web version