The Creature Blocked Our Path 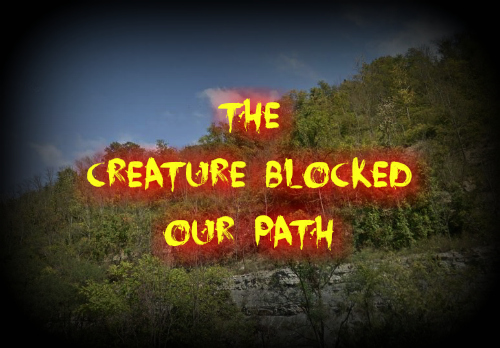 Rob in West Virginia wrote in to tell of his experience:

“I think it was the summer of '82. My friend Mike and I used to spend hours on the hills behind my grandmother's house on 48th street in Benwood, West Virginia. Route 2, a four-lane highway was right there, so were the railroad tracks. Even though mike and I were just kids, both around 11, we disobeyed our parents and carefully crossed the four lane highway. On the other side was what I now believe to be a game trail. No doubt created by deer on their quest for the river. This was the path to our adventure and led to all the cool spots we would come to enjoy.

We climbed the hill and passed our favorite locations like that little over hang of rock that could shelter us from the rain and provide a convenient place to light a fire. We loved building small fires. We were careful though. I give us credit for that. Good old Smokey Bear did his job. A little later in our explorations we found an even larger overhang which would provide shelter from even a storm. This, we thought to our self, was where the Indians took shelter. Despite the truth of that statement, we never found any indicators of modern occupation. Do not forget, we were 11 and 12.

Now, the forest was beautiful that time of year. Birds were chirping and sunlight streamed through the openings in the forest canopy. I can remember the smell of some wild bush on the land, some aromatic thing floating through the air. I felt good that day and I was with a good friend. At some point we deviated from the trail and began to move north along the side of the hill. Keep in mind we could hear the highway below. So there was no chance of us getting lost. We went perhaps a few hundred yards and then began to descend. We made our own path through the woods but soon we would find our path blocked.

All of a sudden, off to the left, we see something hunched over moving up and down rhythmically. There was no sound except for the creature rustling the underbrush. It looked about the size of an ape or perhaps a small bear. We did not know what to think. My first reaction was to throw my Jolly Rancher at the creature and take off running down the hill in the direction of the highway. I think Mike did the same but at that instant it was all about me. Suddenly we come to a screaming, screeching halt – briars! There was a whole wall of them and no clear path around them. In fact, we were among them before we even knew what happened. We looked around and listened but there was no sign of the creature. It must have taken us a half hour to find our way through or around the briars and find our way back to the highway.

When I look back at it, it was an adventure but one that scared he freaking crap out of me. We returned home and made no mention of it to our parents. After all they did not need to know just how far we had gone that day.”

NOTE: Though the written statement implied that this was a Bigfoot encounter (according to the source), it could possibly have been something else. This location is along the Ohio River and very near Wheeling, WV. and north of Moundsville. There have been several unexplained sightings in this area for many years...including upright canines, strange flying creatures, apparitions, bizarre humanoids and UFOs. Then again, it's West Virginia. Lon

- The book was written by Rosemary Ellen Guiley. Several of my reports are included as well. This is a 'must have' for any cryptid library. Lon

The Wild Men of Wildcat: A Terrifying Account of 9 Days of Hell in the central West Virginia Mountains