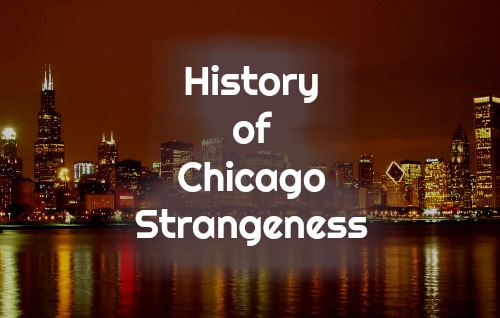 The following reports have been provided by humanoid researcher / author Albert Rosales. It is a 3-part series that concentrates on Chicago strangeness:

A light came in through the window early morning on a Sunday, which woke the witness up. The window was covered almost all the way except for an opening at the very top in which the bright light came through. Next as the witness wondered what it could be, a being came right through the covered window like a ghost would go through walls. The witness was beginning to think “act frightened” when this being told him in his own voice, “don’t worry everything going to be ok”, all of the sudden the witness became calm. The being then began to walk around the bed and that’s when the witness realized that he couldn’t move his body, only his eyes. He followed the being with his eyes and had the impression that it was a female. This being had long dirty blond hair, big eyes, a slit for a mouth, and two little holes for a nose; its skin was a bluish-greenish color. It stood next to the bed and again in the witness’s voice told him that everything was going to be ok. It sat down on the bed, reached over and began to massage the witness’s bad knee in which he had problems walking up and down stairs and pain. Next thing the witness knew was waking up not realizing what had happened over night and started walking to the bathroom and that’s when he realized that the pain was gone. He began to jump up and down very happy when he suddenly remembered the “dream” or event from the night before. The knee pain never returned to this day.

A man visiting a friend’s house and sleeping on the sofa in the bedroom suddenly woke up feeling very panicky and totally unable to move. Looking towards the front door he saw a huge humanoid figure over 7 ft tall standing by the door. The figure resembled a large “praying mantis” and was wearing something resembling a black and purple cloak. Its skin was dark gray in color. It slowly approached the witness and reached out to him with a large hand with long thin fingers and grabbed his shoulder. At this point the witness lost consciousness and does not recall anything else of the incident. He remembered also feeling very cold during the encounter.

Adrian D. woke up and needed to use the bathroom. He turned on his bedroom light as not to step on anything. After opening the door he turned on another light, and looked up. Something wearing green was standing on the other side of the room with his back to the witness. It was wearing a weird helmet and looked definitely human. It left a cloud of grayish purple dust when it suddenly disappeared in plain sight.

The witness was on a highway west of town when he happened to look up in to the sky, when he saw a form going through the sky; it was shaped like a human, from the head to middle torso. It had a giant angel like face. It quickly disappeared from sight.

The witness was awakened by a bright light shining through the blinds of his south-side home. After being fully awake he observed that the source of the light was a bright object hovering in the sky, it covered three panels of one inch mini-blinds. He got out of bed and went to the porch for a closer observation. The object hovered and he watched as it changed colors and directions. He was able to shoot some video of two maneuvering luminous crafts overhead. A few weeks later the same witness was awaken by an alien creature doing something to his hand. He could only move his head and in the dark, he could observe the creature massaging his hand. He doesn’t recall when the creature left but in the morning, he looked at his left hand and found a lump (which he still has) under his skin between the first and second digits.

Source: NUFORC
(There is no information as to the whereabouts of the video)

Authorities are expected to resume their search today for a Chicago Heights woman who disappeared involving with a UFO abduction case while jogging late Sunday evening in a forest preserve. A 39-year old woman was on a three and a half mile run through the forest preserve on 26th and Euclid Avenue near Chicago Heights Sunday evening when she disappeared. Police spent all day Monday searching the forest preserve for clues into the UFO abduction disappearance. Around 1900 the mother of three called her sister and a friend on her cell phone before her run. Her last words were, “Hello please call me back, I had seen something this is very important! Please hurry up! This is urgent! The last call was placed to her best friend. Her friend said, “She never just left. Her kids are worried. She has three kids. She has a 5-year old, an 18-year old and a 14-year old. We just want her back”, said her friend. Police say they have traced the signal from that cell phone to somewhere in the forest preserve. At around 1900 a few unidentified callers called into the Chicago Heights police station reported a strange craft hovering over the forest preserve. They said the object was making a loud whizzing sound and had numerous multicolored lights and it was dome-shaped. About 2000 another relative tried to call her but couldn’t reach her. Two hours later family members found her late model sport utility vehicle in a parking lot.

Source: NUFORC
Comments: As of today I have not read or heard any independent information about this case.
Info received recently:

The text messages sent two weeks ago were the last anyone heard from Viridiana Maldonado.

The 22-year-old told her mother she was going out with friends after finishing her waitress job on the night of Oct. 11. Early the next morning, the mother received the text messages in rapid succession: first, that she was downtown and doing OK; then that she was with a male friend drinking; the last one at 2 a.m. said she was on her way to Mexico.

Since then, Maldonado hasn't returned to care for her young boys, gone back to work or let any family members know where she is.

"She has two kids. Nobody's going to leave the kids just like that," said Luis Aguirre, her boss and a family friend.

The messages seemed completely out of character for Maldonado, Aguirre and others said.

She lived with her mother and older sister in North Charleston. Her two children are 2 and 6 years old. Her estranged husband, Jorge Maldonado, is the father of the youngest child, acquaintances said.

Until about two months ago, she had been living with her husband in Washington State, where he was stationed with the Army at Fort Lewis. But the two were having marital difficulties and she returned to Charleston a couple of months ago, acquaintances said.

She had lived in North Charleston before moving out West. The estranged husband came to South Carolina to take the youngest child on Wednesday, police and acquaintances said.

Friends called her "Viri." Her older sister, Jeny Cuevas, said she got along well with her family and didn't have any enemies.

Aguirre is worried whether police are putting enough effort in the case. Family friend Mike Diggs said there are rumors about her having been kidnapped.

North Charleston detective David Watson agreed that the circumstances are strange but said he has found no signs of foul play.
"I'm giving it all the time I can," Watson said.

The detective thinks it unlikely that Maldonado returned to Mexico, her home country.

She and her husband had a history of domestic problems in Washington State and she had an order of protection against him, Watson said. The husband has cooperated with the investigator when the two spoke on the phone.

For now, authorities are asking anyone with information about her to call. Or if Maldonado is OK, Watson said, she should call her family to let them know.

After a late party the witness was staying at his girlfriend’s house, he had decided to sleep in the basement even though his girlfriend’s party had warned him that the house was “haunted”. As he was dozing off on the couch he began hearing small noises, like stuff being moved across the floor, but he brushed it off, assuming it was his girlfriend’s father trying to scare him. It was pitch black in the basement. Shortly after he began hearing what sounded like feet dragging across the floor---right next to his bed. He looked to see and even though it was pitch black, he could clearly see a black shadow walk past the mirror that was hanging across from him. He pulled out his cellphone to use the light to see, but all he saw was blackness. He checked around but the door was still closed. A few weeks before this event he had seen the curtains in the living room open up as if someone was looking out, and there hadn’t been anyone in the house.

The witness, who was attending the University of Chicago, had decided to take a well-deserved break and along with his girlfriend went out to enjoy the unusually warm weather that they were having. As they walked toward a community park near the campus, they were talking about their classes when a commotion amongst a group of people caught their attention. As they looked towards the group of about 4-5 something caught his eye and he looked up to see a creature flying overhead. It looked like a man with wings. He flew about 10-12 feet above them and was perfectly silhouetted against the evening sky. The eyes of the figure glowed red. They watched for about 4 seconds until it disappeared from view.