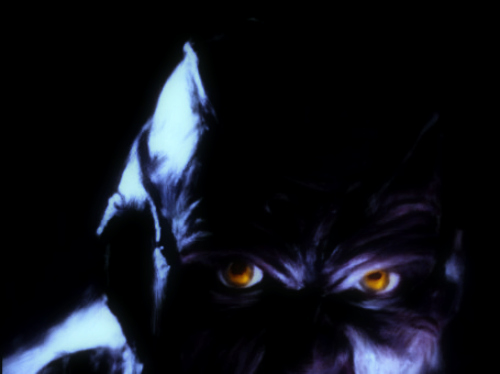 The 'Thing' on Palm Island

“There is this 'thing' that has been seen on the island for decades. It's just one of the many evil, scary things that are there and show themselves when they want to. Well this one particular thing is pure evil. It shows itself to people, wearing a dark trench coat. Not many have seen its face, but my brothers have. It follows them throughout the community, always at night. Always wearing the coat. You see, on Palm Island, if you want to go somewhere, you just walk. No matter what the time is, if you want to get home you just walk. And the streets are pitch black, no street lights. So it would follow them.

This 'thing' is huge, bigger than any man and scary as heck. It would always keep the same distance behind them and in the darkness of the night all they would hear is sound of its hoof walking on the road. When they'd make it home it would torment them all night. Running on the roof or banging on the walls and under the house. Then when they are asleep it shows itself to them in its true form. It comes to them in their nightmares. My brothers all described it the same way. It looks like the thing off 'Jeepers Creepers.' Mind you its been after them way before the movie came out. Its big with this monstrous face, more uglier and grotesque than you can imagine. Its got hooves, long claw=like fingers and enormous wings which it uses to chase them. Every time its chased them its always caught them. My brother said he even tried in a nightmare to jump off a cliff, he said he'd rather die than let it take him but as he jumped off the cliff and as it was falling all he could hear was the sound of wings.

All of my brothers see this 'thing' and have been for decades now. It stands up in the darkness holding a rope, trying to make them commit you know what, and other times its tormenting them to a point where they cant sleep. If they do it goes to them in their dreams. I know my brothers are not the only ones on Palm Island that see it. This thing just roams around Palm Island freely.”

One of the stars of the VH1 reality show Basketball Wives claims that she once encountered Bigfoot and spoke to the creature via telepathy!

During a taping of the program, Jackie Christie, wife of former NBA star Doug Christie, recounted the experience in vivid detail.

According to Christie, who grew up in the Pacific Northwest, the bizarre incident occurred when she, her best friend, and her mother were driving down the highway.

"All of a sudden, you just see this big giant shadow come up in front of the car," she recalled, "it's hairy and it looks right into the front window."

Sitting in the passenger seat, Christie says, she could see right into the creature's eyes and the two connected on some kind of psychic level.

"It just looked and for a moment, I know it knew me and I knew it," she mused. Read more at Reality TV Star Shares Strange Sasquatch Encounter

Herd of Cows Jumps Over Cliff

What caused a herd of cows to jump to its death from a cliff in the Valais last week?

That’s the question pondered by farming experts in the area, who fear the animals may have been chased by an unknown predator, reported Swiss media.

The 13 Hérens cows broke out of their pen, ran towards a cliff and either fell or threw themselves off the 50 metre drop last Wednesday night near the village of Levron, local paper La Nouvelliste reported.

Twelve of them died, the thirteenth survived -- probably because it landed on the others -- but was injured and taken to an animal hospital in Bern.

“The cows broke through several lines around the pasture before finding themselves on the ridge. They fell into the void, as though they were forced into it,” Norbert Terrettaz, president of an farming insurance company in the region, told the paper.

In total the cows were thought to be worth 20,000 francs.

They belonged to several owners but were all grazing on land belonging to a local couple, who said they thought some kind of predator must have chased the beasts off the cliff.

Nevertheless, their behaviour was unusual.

“Cows don’t follow each other like sheep, when they are scared they have a tendency to disperse,” said Terrettaz.

Perhaps a dog off the leash provoked their flight, or even a wolf, he said.

Speaking to Le Matin, another expert agreed it was puzzling.

“They must have been blocked somehow. One or two cows falling off, that’s possible. Thirteen, that’s a new and incomprehensible phenomenon,” said Benoît Berguerand of a breeders’ association. “It is unlikely that they threw themselves off without pressure."

To add to the mystery, before reaching the cliff the fleeing cows had to pass through a pasture occupied by four yaks, none of whom had injuries consistent with a predator. If a wolf or lynx was pursuing the cows, it’s unlikely it would have been uninterested in the yaks, pointed out La Nouvelliste.

Since there is no evidence to point to the cause, the commune is now appealing to witnesses to help explain what might have happened.

The Hérens (or Eringer in German) cow is a traditional breed in the Swiss canton of Valais whose ancestors existed in the Rhône valley region as far back as 3,000BC.

They are bred throughout the Valais, particularly Nendaz, Nax/Mont Noble, Veysonnaz, the Val d'Anniviers and the Val d'Herens, plus Leukerbad on the other side of the Rhône valley.

Naturally combative, the cows often fight to establish the leader of the herd, behaviour that has led to organized cow-fighting competitions in the area. - Swiss farmers left puzzled after cows throw themselves off cliff

Flying Humanoids- Live with Lon Strickler: My appearance on the Acrylic Ranch

Chicago’s Current Mothman Flap “A Warning,” Says Expert...NOTE: I'm not an 'expert.' There are no experts in cryptid & paranormal research. Lon

The Modern Appeal of Mystical Healing


The Roswell UFO Conspiracy: Exposing A Shocking And Sinister Secret

This newsletter is licensed under a Creative Commons Attribution-Noncommercial-No Derivative Works 3.0 United States License.
Hotlinking of PM Media images and copyrighted material is strictly forbidden unless permission is obtained.
'Phantoms and Monsters' and 'phantomsandmonsters.com' is protected under the Lanham (Trademark) Act (Title 15, Chapter 22 of the United States Code)
'Phantoms and Monsters' was establish in September 2005 as part of PM Media
Copyright 2005-2017 Phantoms and Monsters / PM Media - All Rights Reserved
Lon Strickler at 1:42 PM
Share
‹
›
Home
View web version