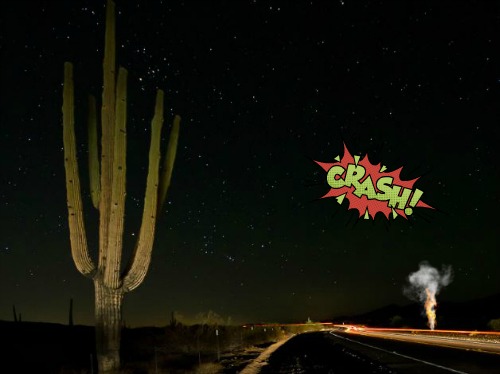 I'm not sure how this fits in but the experience has stayed with me; and I had to post something.

I am a long haul driver and was travelling east on Interstate 8, just east of Fortuna, Arizona. Having checked the clock, it was 3:45 AM when I alerted my partner to the presence of three or four individuals standing in the middle of the traffic lane. After sounding the truck horn, I began to slow our rig. Given the fact that the area is well known for human smuggling and is dangerous to travel, I wondered if, perhaps, we should keep going.

But, when it became apparent that at least three of the individuals were wearing some kind of uniform, I decided to stop along the right shoulder. Nevertheless, my second driver emerged from the sleeper with the shotgun that we carry. Both of us agreed that neither of us was going to step from the cab, and we kept the engine idling.

Three individuals walked slowly toward me, toward the driver's side of the cab. At about fifteen feet, I could tell that all three of them were suited, if you will, in some sort of gear. I wondered if the Marines, from the nearby Marine Corps air station, had crashed and were going to ask us for help.

As I lowered the driver's window, the shortest of the three, bundled in heavy white gear, with what looked like white armor around the chest, and a partial faceplate that emerged from below the chin, said to me, in perfect English, "Not to worry, we have a minor situation." He (it) motioned with his left arm toward the distance, off the highway. It was strange because neither my partner nor I saw anything as we approached the group but, sure enough, something was putting out intense red flames, maybe fifty feet off the right shoulder from where we were parked.

Before I could say anything, a triangle-shaped wedge of the landscape to our right, with the flames at the base of the triangle, rose up and sliced through the truck cab. For lack of a better description, I felt like I was looking at some kind of image--as it came through the cab. I mean, the individual who spoke to me appeared first on the left side near me, and then appeared on the right side, the raised side, then on both sides, which appeared raised.

My throat was so dry, my stomach in knots; honestly, I felt like I was going to heave. I figured we had it. Three individuals, two in white, wearing helmets, and one who appeared burned or blackened and without a helmet, appeared in the image to our right, as they made their way around chunks of rock, walking towards our cab. There was a lot of communication, like radio, between them, or between somebody.

The one who had spoken to me, after I had lowered the window, now sounded metallic. So I turned once again towards the voice, to my left again, toward the open window and he (or it) wasn't there. I turned toward my partner, in the right front seat, who was still cradling the shotgun, nothing. I mean, it was black. It was perfectly silent. There were no flames off to the right in the distance.

Our clock showed 5:15 AM, only the entire encounter felt like it had lasted fifteen minutes or so. I don't know what to claim. I stopped to assist several entities that appeared to be projected from somewhere; and I still feel nauseous. - NUFORC

Tall 'Woman' at the Truck Stop

Louisiana - 2013-10-15: Me and my wife were driving from Arkansas to Texas to pick up my wife's mom. We were almost to Texas when we both needed to pee really bad so we stopped in a Love's truck stop. We went in and were heading to the bathrooms. We started down an isle. There was what appeared to be a tall lady with grey shoes, grey leggings & gray skirt, and a shawl around her face. Her eyes were very dark AND skin was almost white. She was facing the rack, not moving at all & starring straight ahead. her shoes, leggings and skirt were made of the same material. Her shawl was of designs I have never seen. My wife and I stopped immediately and went to another isle heading towards the bathroom. I have a photographic memory. I peed really quick and came out fast. My wife came out fast to see her but she was gone in four minutes. While I was in the isle I felt as if she was trying to get in my head. She couldn't. A long time ago something tried to get into my thoughts but I stopped them. This sounds crazy. We do have many things 30-40 feet over our heads at home. We have also got pics of their ship. Small ones over my boat. It looks like flying saucers, orange balls of light and white balls of light. also multifaceted ships, all make no noise. Also seen what looked like a hole in the sky that was open. Most of this I saw when I was younger in Cali, Arkansas. Never saw that lady again. I walked fast threw the whole store and outside. We couldn't find her. Her body type was like the Pharaoh from Egypt and her nose was very big with a crook. They're here with us. - MUFON

If you're looking for stars with kind of out there, whacky reputations, Guardians of the Galaxy Vol. 2 co-star Kurt Russell isn't one of them. He's no Randy Quaid, is what we're saying. So it came as a real surprise to learn via a recent guest appearance on the BBC to talk about Guardians that Russell was likely one of the pilots who first reported an event that eventually became known as the Phoenix Lights.

The Lights remain one of the most interesting UFO sightings in history. On the night of March 13, 1997, several thousand witnesses in Phoenix, Arizona and in northern Mexico reported weird formations of lights in the night sky. The most famous description was of a gigantic, soundless V-shaped object that moved slowly across the sky like a sailing ship.

Hey folks...thanks for your generous response. I was able to secure the medical replacement parts and equipment that I needed. Your support is very much appreciated. Lon

The Majestic 12 Documents Are Back…

UFO sighted in York? Sure, why not

This newsletter is licensed under a Creative Commons Attribution-Noncommercial-No Derivative Works 3.0 United States License.
Hotlinking of PM Media images and copyrighted material is strictly forbidden unless permission is obtained.
'Phantoms and Monsters' and 'phantomsandmonsters.com' is protected under the Lanham (Trademark) Act (Title 15, Chapter 22 of the United States Code)
'Phantoms and Monsters' was establish in September 2005 as part of PM Media
Copyright 2005-2017 Phantoms and Monsters / PM Media - All Rights Reserved
Lon Strickler at 9:35 AM
Share
‹
›
Home
View web version