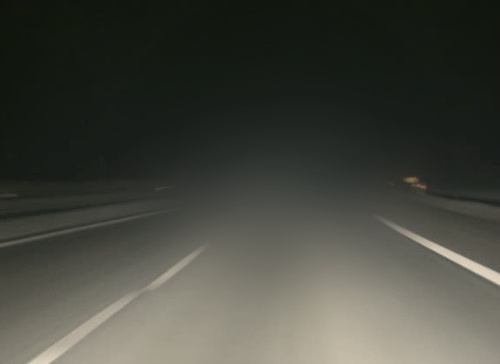 Lost Time in the Fog

Chris from Delaware called in to tell of a weird experience he had while driving his truck:

“I was driving eastbound on Interstate 70 through Ohio and there's an interchange of interstate 77. It goes north and south and I was going east toward that, wide awake. I drive a brand-new truck. I had plenty of sleep. Driving conditions were perfect. I could see stars in the sky and a partial moon. It was very bright. Then, as I got close to interchange, there was some slight fog but it wasn't anything too drastic, it was just minor but, you know, like, to make a long story short, the last thing I remember is approaching this interchange and what seemed to be like, exactly like, maybe 2 or 3 seconds. I'm out of the fog and about 2 or 3 minutes after that, I noticed the mile marker signs being different, meaning, instead of being 81-82-83 they were 37-38, that way... lower sequence and I noticed that the moon, that was in front of me, was out to my left, so I was obviously going south.

I pulled over right away. I pulled out my map to look at the very next exit coming up and I was literally 15 miles south of that interchange in what seemed to be about, maybe, 30 seconds. It really really freaked me out because I consider myself a pretty sharp individual. I'm in good health. No medication. I'm on a dedicated route that I've been doing for three and a half years. I can drive it blindfolded and for that to happen. I had to drive an extra couple of miles to get myself situated. I could not believe how far south that I had driven and the only thing I can think of is that I went through that fog bank and the rest is history and it's always really bothered me. Like thinking there was something wrong with my mental health or my, you know, my physical presence.”

Fouke, Ark., Mayor Terry Purvis has received a Freedom of Information request about the Fouke Monster from MuckRock.com.

"I've never had a request like this. It's weird," Purvis said.

"We don't have any records or reports of known sightings in the city limits of Fouke of the Fouke Monster, Southern Sasquatch or other unidentified or supposed paranormal," Purvis said.

"All the sightings have been out in the county."

Purvis responded to MuckRock.com with an fax saying, "The City of Fouke Police Department does not have any police reports pertaining to 'Fouke Monster,' 'Southern Sasquatch' or supposed paranormal creatures."

The FOI requested was made by Nathanael King, a staff reporter, representing the publication MuckRock.com.

"The requested documents will be made available to the general public, and this request is not being made for commercial purposes," said the request from King.

"Being the mayor I get to see and hear of some pretty interesting stuff," Purvis said. "Some things are pretty awesome and some just makes you want to take pause and pray for humanity, but this one takes the cake.

"I am literally speechless. The kicker is, by law I have to answer this. I will do my best and try to be professional in my response. I don't have anything for them. the Fouke Monster and Southern Sasquatch never visited downtown."

CARLE PLACE, N.Y. (CBSNewYork) — More than 100 reptiles were found hopping, crawling and slithering around a house in Nassau County Monday.

As CBS2’s Brian Conybeare reported, many of the animals are banned in New York state and are considered extremely dangerous.

The block of 11th Street in Carle Place where the discovery happened is quiet outside. But inside one house, investigators said they found the assortment of reptiles – many of which the Nassau County Society for the Prevention of Cruelty to Animals noted are illegal to own.

The SPCA on Monday afternoon brought out a baby alligator that had its mouth taped shut as a precaution. There were also dozens of turtles in the basement in what investigators called “horrendous conditions.”

So bad, in fact, that at least ten of the more than 100 reptiles found were dead; including two snakes, an iguana, and a lizard known as a blue tongued skink.

“If you’re not taking care of them and you’re abusing them, then why would you have a hundred of them? It doesn’t make sense,” Ralbovsky said. Read more at More Than 100 Reptiles, Many Illegal To Own, Found In Carle Place Home

One summer, at around 10:00, a few years ago, I looked out of my bedroom window. Then something truly strange caught my eye. In the bush in my neighbor's yard was these little twinkling lights. Now at first I assumed they were lightning bugs, which I had played with as a little girl. But as I looked at the bush, closer, I noticed little things flying around the bush, about the size of my pointer finger. I then watched the bush for about an hour when I finally fell asleep. The next night I walked outside about ten feet away from the bush. It was very dark and I could hardly make out the blinking lights, when I felt a sharp pain on my leg. I looked down and I saw a bead of blood on my leg, coming from a small bite on my leg, no bigger than a bug bite. I ran inside and never asked or went outside at night again. I can only assume these were faeries or pixies, and not the nice kind. Now, when I look out my window I don't see the lights anymore, but I remember this strange encounter. - AM

Ripley's SLS Capture - Dave Spinks, Society of the Supernatural, will be our guest on Arcane Radio on June 7th 10PM ET

A "Jinn" in Transylvania


Magickal Servitors: Create Your Own Spirits to Attract Pleasure, Power and Prosperity

Creatures of Thought: The Creation of Living Thought-Forms And The Mastery of Your Reality

The Slenderman Mysteries: An Internet Urban Legend Comes to Life

This newsletter is licensed under a Creative Commons Attribution-Noncommercial-No Derivative Works 3.0 United States License.
Hotlinking of PM Media images and copyrighted material is strictly forbidden unless permission is obtained.
'Phantoms and Monsters' and 'phantomsandmonsters.com' is protected under the Lanham (Trademark) Act (Title 15, Chapter 22 of the United States Code)
'Phantoms and Monsters' was establish in September 2005 as part of PM Media
Copyright 2005-2017 Phantoms and Monsters / PM Media - All Rights Reserved
Lon Strickler at 10:12 AM
Share
‹
›
Home
View web version