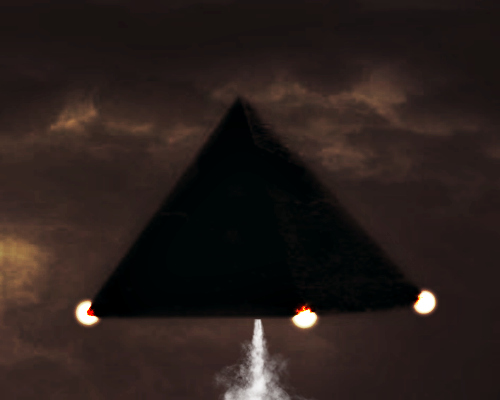 Chris in Jefferson City, Missouri called in to tell of his black pyramid sighting:

“I wanted to tell you about something I had seen back in about 2002. It was shortly after the 9/11 attacks so, you know, I got off work one night, I went home, took a shower and I was about to go over to a friend of mine's house to hang out for a while. I was driving...I was in Moberly, Missouri at the time. I was driving past the cemetery and I look over at the cemetery and I see these three bright white lights coming in like, they seem to be coming in quickly, like I almost thought to myself, since it was shortly after the attacks, that I was about to witness a plane crash because the bright white lights were coming in quickly and low to the ground. But as they came in closer to me, they slowed down and stopped.

I was going down a street called Rollins Street. It's like a four-lane street and there was nobody around and they came in closer and as they came in closer, they stopped right above that street. It was probably above the ground as high as one of those telephone poles are. I'd say the whole craft was probably at least a block in size. It was a solid pyramid. I wont say it was black triangle because it wasn't a triangle. It was a pyramid like it had depth to it from the bottom of the craft up. It stopped right there and I think it was just like watching me or something because it noticed I was the only thing moving around below it and as it stopped above me, it was floating there not making a sound in the sky. It was a solid, like I said, black pyramid, and each tip below the craft, each bottom tip was glowing a pure bright white light and underneath it was like an inverted tornado of what looked like liquid light being sucked up into the bottom of the craft and it just sat there and I was saying to myself, 'Oh my God, I am not seeing this. This is not real!' And shortly after that thought, I was like, 'I need to get a witness,' you know, so I got out of my car and I went to the nearest house and banged on the door.

The person answered the door and came outside. It zipped off. Basically, at that point, I told them, you know, I was like, when I looked off into the sky, it was gone, so I was like I just made up a name and I was like, I'm looking for, you know, so and so or something, you know, like maybe I got the wrong house, you know what I mean? Because by the time they came outside, it was gone and if I were to explain to them what I just saw, it would be, you know, they wouldn't believe, you know.”

A small town in North Carolina has turned to an unlikely icon in an effort to 'rebrand' their community: Bigfoot.

Nestled in the heart of the Uwharrie National Forest, the town of Troy, North Carolina boasts a population of just under 3,500 residents.

Hoping to give their community an identity that helps it stand out among other small towns, Troy has adopted Bigfoot as their unofficial mascot.

The famed cryptid is featured in the town's tourism brochures and has been prominently added into the logo for their annual TroyFest weekend of community events which will be held later this summer. Read more at NC Town Embraces Bigfoot

In prison for a crime he adamantly denied committing, Richard Anthony Jones repeatedly heard from others that there was another prisoner who looked just like him.

Not only were they doppelgangers, but Jones was told that he and the other man shared the same first name.

Jones never ran across the man, but the lawyers he passed the information on to began digging into his case and came to the conclusion that Jones was indeed an innocent man.

On Wednesday, they made their case to a Johnson County judge, and on Thursday Jones walked free after serving nearly 17 years in prison for a 1999 robbery in Roeland Park.

Not only did he bear an uncanny resemblance to the other man with the same first name, but his lawyers uncovered the fact that the other man lived near the area of where the crime occurred, while Jones lived across the state line in Kansas City.

At Wednesday’s hearing in Johnson County District Court, witnesses, including the robbery victim, testified that looking at pictures of the two men together, they could no longer say if Jones was the perpetrator.

Based on their testimony and the new evidence, Johnson County District Judge Kevin Moriarty ordered Jones’ release. Read more at After finding his doppelganger, Kansas City man is freed from prison

Stone Object Received From Alien Being

Lennox Head, NSW, Australia - 2017-05-05: My partner and I where driving home from work when we saw a bright light descend quickly to where we were driving. As it descended from above us the the bright light turned into a purple light then landed. We both were so overwhelmed and scared at the same time. We watched from a distance of 20m and the light disappeared, then everything went really dark. We stayed still. All of sudden the human-like creature was in front of us and spoke to us in English "have this stone and I will return when the time is right." I lost memory of the creature leaving - MUFON

The space agency has been working tirelessly to identify dangers that Earth face from space, and has said that it has found 10 new asteroids of meteors which it believes could harm life on Earth.

Amy Mainzer, NEOWISE principal investigator from NASA’s Jet Propulsion Laboratory in Pasadena, California, said: “NEOWISE is not only discovering previously uncharted asteroids and comets, but it is providing excellent data on many of those already in our catalog.

“It is also proving to be an invaluable tool in in the refining and perfecting of techniques for near-Earth object discovery and characterisation by a space-based infrared observatory.” Read more at ASTEROID WARNING: NASA discovers TEN ‘potentially hazardous’ rocks close to Earth

Butch Cassidy waited along the trail, hidden in the bushes. He knew the banker, with a thousand dollars in his pocket, would be coming his way shortly. He didn’t have to wait long. The banker approached in a buggy, and, as luck would have it, stopped right in front of Cassidy’s hiding place to count his money. Cassidy stepped out of the bushes, six-shooter in hand, and said, “I’ll take those.”

There’s nothing unusual about Butch Cassidy robbing a banker. What makes this story unusual is that it allegedly happened several years after he and the Sundance Kid were supposed to have died in a famous gunfight in Bolivia.

According to Lula Betenson, Cassidy’s youngest sister, Cassidy and the Sundance Kid didn’t die in Bolivia. Betenson is the author of Butch Cassidy, My Brother

She wrote the book in 1975. The information in her book came from a meeting she said she had with her brother in 1925, when Betenson was 41 and Cassidy was 59. Betenson died in 1980. Read more at The Mysterious Deaths of Butch Cassidy and the Sundance Kid: Uncovered Manuscript Says They Didn't Die in a Bolivian Gunfight


Your contribution to Phantoms & Monsters allows me to devote more time and effort into gathering and presenting the most up-to-date information. You can use the donation button below or go directly to Paypal.com using my email as the recipient lonstrickler@phantomsandmonsters.com Thanks again...Lon

Oldest Fossils of Homo Sapiens Found in Morocco, Altering History of Our Species

Some Very Strange Information on the Bizarre Vanishing of Dennis Martin


The Mythical Creatures Bible: The Definitive Guide to Legendary Beings

A Field Guide to the Cryptids of North America