Daily 2 Cents: Has the 'Butler Gargoyle' Returned -- '...there was no face' -- Rectangular Marks On My Thighs 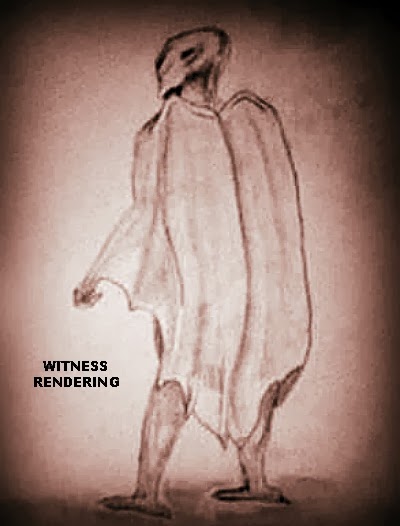 Has the 'Butler Gargoyle' Returned

Lon...About month ago on my way to work, a delivery truck had run off the road. About 1 mile from last few sightings of the gargoyle. Driver was very shaken up. I stopped to help. State Police on scene. I started talking to everyone. Trooper said a bear ran in front of truck. Driver said, "That was not a bear. I'm not sure WTF I saw. But it looked like winged demon from Hell."

Since then I've heard rumors few other people have seen it too. If I find out more I'll email you. R

Has the 'Butler Gargoyle' returned?

This was in response to a video about faceless entities:

“I had a similar experience when I was about 8 or 9 years old, circa 1978 in Wisconsin. It was winter and I had been at my school late, and I was headed out the main doors with a friend. Just as we opened the doors, we saw someone walking by on the sidewalk in front of the school. This person turned their head sharply, in a menacing and almost unnatural way, and there was no face. We screamed, ran the other way through the school and out the other side, straight to the nearest house to get help. I remember being terrified and the fact that my friend saw it too and reacted the same way really drove things home. Since this was in the city, it could have been a prankster out to scare school children, but how common or available were zentai masks back then?”

Rectangular Marks On My Thighs

Point Comfort, TX - 2017-05-26: I have previously reported strange lights in the area which witnesses have also seen and we have not been able to explain. Since then, about 3 weeks, I woke up the morning of May 27, 2017 with rectangular markings on my left inner thigh that resemble burn marks. Prior to this, around 2 years ago when we moved to this location, I woke up to what resembles an incision on my right inner thigh. Until the 27th I blew it off thinking it was a collapsed vein. Now I'm not sure. I have a cousin that is abducted on a repeated basis. my whole family knows of these occurrences. There are witnesses to her abductions. I pray I'm not being abducted too, but these markings on my thighs are unexplained. I have photos which I'd like to send you. Hopefully you can give me some resolve? Any help would be greatly appreciated. I have two young boys and fear for their safety. My 5yr old used to tell me and my wife someone was always in the room with him at night. He still refuses to go into a room unless there's a light on. Please, just hear me out and let me send you the pictures of my thighs. - MUFON

Flashes of Light Over Chicago

I'd like to pose an inquiry. There have been several reports of sudden bright flashes of light over the Chicago metro during the flying humanoid flap. Do you believe there is a connection? Could this be a sign of a portal opening? Your thoughts. Lon

The Professional UFO Skeptic Who Believed in Aliens

Can a Ghost Make You Ill? The Ghost Sickness Belief of the Native American Indians

Mysterious ice falls from the sky


Unearthing the Lost World of the Cloudeaters: Compelling Evidence of the Incursion of Giants, Their Extraordinary Technology, and Imminent Return

The Harbinger: The Ancient Mystery that Holds the Secret of America's Future

Fingerprints of the Gods

This newsletter is licensed under a Creative Commons Attribution-Noncommercial-No Derivative Works 3.0 United States License.
Hotlinking of PM Media images and copyrighted material is strictly forbidden unless permission is obtained.
'Phantoms and Monsters' and 'phantomsandmonsters.com' is protected under the Lanham (Trademark) Act (Title 15, Chapter 22 of the United States Code)
'Phantoms and Monsters' was establish in September 2005 as part of PM Media
Copyright 2005-2017 Phantoms and Monsters / PM Media - All Rights Reserved
Lon Strickler at 2:58 PM
Share
‹
›
Home
View web version