I live in Chicago, in East Garfield. This past Saturday, I was at a local food mart buying groceries. I walked to my car, loaded the 2 bags into my backseat, then got in the driver's seat. As I went to start the car, to my shock, a young pale skinned woman with long dark hair was sitting in the passenger side. The first thing I noticed were her coal-black eyes. She looked right into my eyes and said 'I need help...please help me.' She literally looked like the walking dead. I told her to get out, but she insisted that I take her to the hospital. We weren't too far from the hospital, so I headed in that direction. We were about 2 blocks away and at a red light, when she suddenly jumped out of the car, took a few steps and vanished! No trace of her. She didn't look like a ghost, I mean she was solid in form.

The next (Sunday) I felt sick to my stomach and my eyes were sore and red. I believe it had something to do with this black eyed woman. I'm still not feeling 100% and I've had terrible nightmares.

This may not be related, but a few of my family and friends have recently had unexplained activity at their homes, in particular my brother. He lives a few blocks from me and swears there is a demon in his basement. He and his girlfriend will not go down there and plan to move soon. He has been having terrible dreams as well.

I wish I knew what was going on. Jade

NOTE: I contacted Jade, and mentioned the flying humanoid sightings in Chicago. She was unaware of the sightings but did say that it seems like people are 'walking on eggshells' throughout the city. I thought that was an interesting statement. Lon

The chance that extraterrestrial bacteria would be deadly to humans is zero. Not just very, very small. Zero.

Pathogenesis requires intimacy. This intimacy is attained through millions of years of co-evolution. The need for intimacy is apparent when you look at how bacteria and viruses cause infections and disease.

Infection requires binding to a cell surface. Bacteria (and viruses) bind to human cells through proteins that recognize human proteins and carbohydrates. The structure of these human proteins and carbohydrates is, to a first approximation, arbitrary. There are an almost infinite number of permutations of them that could exist and work just fine. But only one does exist. The chance that an alien bacteria would have evolved to stick to that protein is infinitesimally small.

Even if this alien bacterium were able to stick to a cell surface, this alone would not establish an infection. Infecting bacteria secrete all kinds of toxins and virulence factors. These toxins and factors bind to specific human proteins. They block or modify their activity in ways that degrade cells and tissues, releasing nutrients that the bacteria can feed upon. Read more at Would Extraterrestrial Bacteria Be Dangerous To Humans? 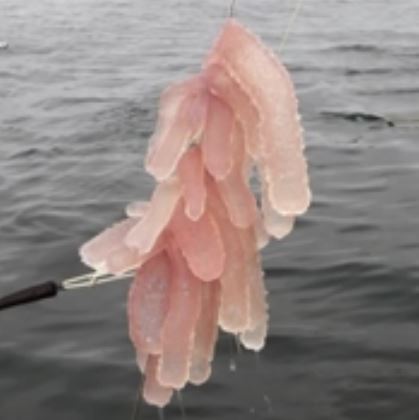 SEATTLE — Cucumber-shaped sea creatures called pyrosomes have arrived off Washington’s coast — and they could mean trouble for the fishing industry.

Their arrive is surprising scientists who are used to seeing them in tropical waters.

“I’m familiar with them, but I’ve never seen them up here in the Pacific Northwest. I’m surprised,” one scientist said.

Each one on its own is pretty small. But they can come together to create giant organisms that are more than 20 feet long. Fishermen are already complaining the pryrosome population is getting so large, they’re now gumming up their fishing lines, hooks and cages. - Sea creatures usually found in tropical waters show up off Washington coast

This newsletter is licensed under a Creative Commons Attribution-Noncommercial-No Derivative Works 3.0 United States License.
Hotlinking of PM Media images and copyrighted material is strictly forbidden unless permission is obtained.
'Phantoms and Monsters' and 'phantomsandmonsters.com' is protected under the Lanham (Trademark) Act (Title 15, Chapter 22 of the United States Code)
'Phantoms and Monsters' was establish in September 2005 as part of PM Media
Copyright 2005-2017 Phantoms and Monsters / PM Media - All Rights Reserved
Lon Strickler at 2:27 PM
Share
‹
›
Home
View web version